Jennifer Lopez has a new book, True Love, out tomorrow, so she’s been making the talk show rounds. And boy has she been talking! About Ben Affleck and Marc Anthony, about facing insecurities and fear, and a whole lot more. Some of the highlights, below. 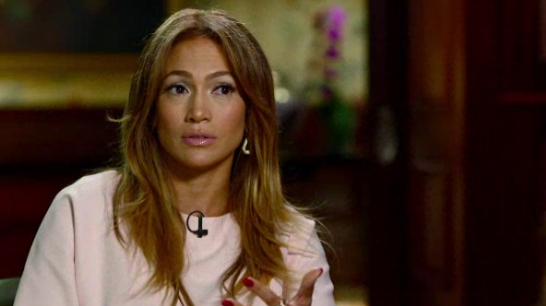 In a two-part interview with Maria Shriver for the “Today” show that began today, she named Ben Affleck as her first big heartbreak. Sure, she was married twice before and famously dated Puff Daddy, but the Affleck relationship took the biggest toll, even if the heartbreak didn’t last.

“Right away when you broke up with Ben Affleck, Marc Anthony was there, like, two days later, and you were in,” Shriver said.

“Right, you’re absolutely right,” Lopez agreed. “It was probably my first big, BIG heartbreak, and to have one of my best friends who I’d known for years who I actually love and did have chemistry with come into my life and say, ‘I’m here.’”

She also opened up about the end of that marriage on “The Meredith Vieira Show,” pinpointing the exact moment she knew it was over. “I was having the worst moment of my life at that moment,” she told Meredith. “I was at this photo shoot, and I just was realizing that my marriage was falling apart.”

At that point, she recalls calling her mother and sobbing, telling her she couldn’t be with him. “I had held it for so long, ‘No, this can’t happen. This is not going to happen. I’m not going do this. I’m going to make this work.’ And I think that’s how everyone feels at that moment but to put it on paper was more terrifying than going through it.”

In an interview with People Magazine, Lopez reveals why she went so personal in “True Love.”

“It started out as fan book, a diary of the years I went on tour,” she explained. “But it turned into something else. As I started looking at things, it helped me face a lot. I would never go into specifics about my relationships, and I don’t. But the idea was that I learned something.”

And for his part, Anthony is supportive. “He read it and said, ‘Wow, I didn’t realize you were going through this whole journey,’ ” says Lopez. “We try to be supportive of each other. We feel that’s the best thing for our kids.”