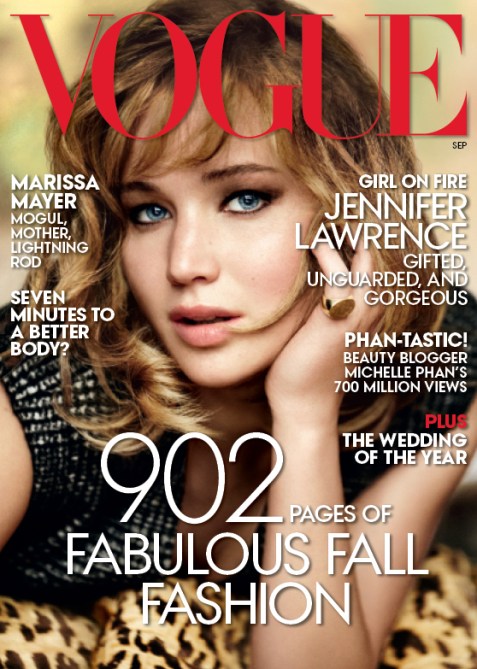 Jennifer Lawrence either has one genius publicist, or she really is as “genuinely weird” as she claims to be in her just-released interview for Vogue’s September cover story. She sat down with writer Jonathan Van Meter at classic downtown New York City restaurant The Odeon, where the two proceeded to sit—and drink—for seven hours while talking about things like J.Law’s career, her nickname, even her bizarre “faith in sponges,” which she claims is the reason she and ex-boyfriend Nicholas Hoult split up.

“I wake up earlier in the morning when I have new sponges,” Lawrence shares. “That counter doesn’t even see it coming. [Nicholas] would never wring them out. We were in the kitchen once, and I picked up the sponge, and it was soapy and wet, and I was like, ‘See?’ These are the kinds of things that make me think we are never going to work.'”

Lawrence continues to play up her “weird girl next door” vibe for the rest of the interview, including detailed descriptions of the anxiety she suffered as a kid. “I was a weirdo,” Lawrence says. “I wasn’t picked on or anything. And I wasn’t smarter than the other kids; that’s not why I didn’t fit in. I’ve always just had this weird anxiety. I hated recess. I didn’t like field trips. Parties really stressed me out. And I had a very different sense of humor.”

The actress also tells Vogue she’s not okay with her celebrity, and that she’s trying to “make peace” with fame, but also says she used to “lie in bed and wonder” about what would make her well-known. “It wasn’t a vision. But as it’s kind of happening, you have this buried understanding.”

MORE: How ‘Normal’ Can Jennifer Lawrence Really Be?

Lawrence appears in Calvin Klein Collection on the cover, which was shot by Mario Testino. Inside, she looks quite ladylike in wears labels like Louis Vuitton, Rochas, and Ralph Lauren; notably absent is her most recent go-to brand, Dior. But she goes pose with some dogs, because, you know, why not.

Head over to Vogue now to read the interview in full, and pick the magazine when it hits newsstands August 20.