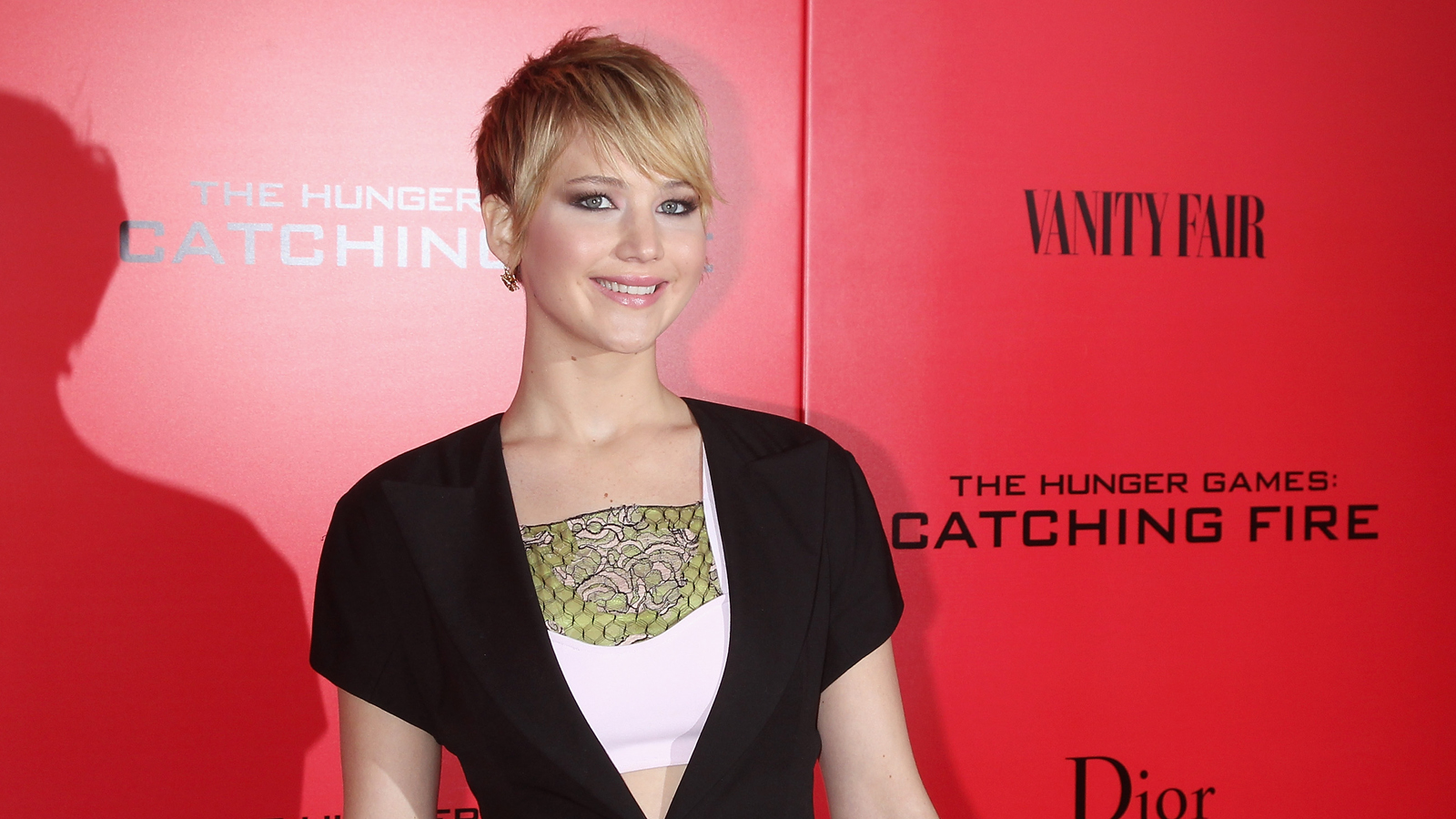 Stars—they’re just like us! Except that, really, they’re not. For the most part, we’re all very aware of the differences between a famous person and ourselves. But there are some celebrities who seemingly work overtime trying to convince us that they’re totally average, grounded, and un-Hollywood. One star that’s particularly adept at the “I’m normal”  spin is Jennifer Lawrence. Granted, we’re fans of the Oscar-winning actress for “Silver Linings Playbook” and current “Hunger Games” star, who does seem fairly grounded by Hollywood standards.

However, it seems that the 23-year-old—in the span of just under three years—has given so many self-deprecating quotes that they’re starting to hinge on condescending. As down-to-earth as she may be, the fact remains that she is a major movie star whose been nominated for Oscars, walks red carpets in custom Dior Haute Couture (she’s the face of the brand’s handbag line—another perk of fame), and rakes in millions of dollars per project.

And we’re okay with that.  It seems she’s the one who feels the need overcompensate a bit about her fame. Need proof? We’ve compiled all her greatest verbal “I’m normal!” quotes in one list, so you can decide for yourself.

The “I eat cheesesteaks before red carpets!” comment: In 2011, a then-unknown Lawrence wowed the world with her raw portrayal of a rural Ozarks teen who skinned squirrels in “Winter’s Bone.” She was nominated for an Oscar, and showed up to the awards in a skin-tight red Calvin Klein gown—and swore to Elle magazine that she’d barely begun digesting a cheesesteak when she walked the red carpet. “Fifteen minutes before, the guy doing my hair goes, ‘If you can get a salad, get a salad,'” Lawrence told Elle. “I said, ‘I’m getting a Philly cheesesteak.’ I’m sure there’s proof on a hotel bill somewhere.”

The “I have uneven boobs!” comment: Lawrence looked svelte and glamorous in a mustard yellow dress on “Jimmy Kimmel” Thursday night and told the host (and the rest of country, apparently) about yet another “flaw”: “I went to the doctor today and got a chest X-ray of my lungs and discovered that my breasts are uneven!” the 22-year-old said. To be fair, she also admitted that she was “sick and a little drunk” on the show: “Your producer made me do two shots of tequila and a beer. But the beer was my decision,” she admitted, which arguably counts as yet another “I’m just like you” comment.

The “I’m obese in Hollywood!” comment: In a December 2012 interview with Elle, the actress responded to critics who claimed she was too large to play the near-starving Katniss Everdeen in “The Hunger Games” by giving us this gem: “In Hollywood, I’m obese. I’m considered a fat actress. I’m Val Kilmer in that one picture on the beach.”  Not only did this comment show she’s totally self-aware and can poke fun at both herself and Hollywood’s standards, but it also implies: “Hey, that Kilmer quip makes me witty!”

In the same interview, Lawrence also stuck in the obligatory “role model” comment: “I don’t want little girls to be like, ‘Oh, I want to look like Katniss, so I’m going to skip dinner’ … I was trying to get my body to look fit and strong — not thin and underfed. I’ll be the only actress who doesn’t have anorexia rumors.” For the record, Lawrence’s waist size is rumored to be a 24.

The “acting is stupid!” comment: Continuing her self deprecation streak in print, Lawrence told the February issue of  Vanity Fair that her career is unimportant and, actually, quite dumb. “Not to sound rude, but [acting] is stupid. Everybody’s like, ‘How can you remain with a level head?’ And I’m like, ‘Why would I ever get cocky? I’m not saving anybody’s life. There are doctors who save lives and firemen who run into burning buildings. I’m making movies. It’s stupid.’”

Not sure how the studios responded to that one, but yikes!

The “I’m SO boring!” comment(s): In November, Jennifer appeared on the “Today” show and claimed that despite her fame, her life is SO boring and un-tabloid worthy. “I’m very boring and [the tabloids] know that. All paparazzis leave my house at, like,  5 p.m.because they know I’m not going anywhere.”

That’s not all: To further prove she’s a snooze-fest, Lawrence told January’s Marie Claire: “I don’t like going out that much. I’m kind of an old lady. After it’s 11, I’m like, ‘Don’t these kids ever get tired?’ When I’m out, I think about my couch. Like, ‘It would be awesome to be on it right now. I bet there’s an episode of ‘Dance Moms’ on. Am I missing a new episode of ‘Keeping Up with the Kardashians?’ I’m just stressed by the idea of missing them.” Not only is she selling us on the fact that’s she’s the anti-Lohan, but she’s also proving she’s a reality TV dork like the rest of America. How’s that for a one-two “I’m normal!” punch?

The “I Barely Have Talent!” comment: In the October 2012 issue of W,  Lawrence decided to tick off stuff she’s not good at.  “I’m such a bad dancer. I don’t have many talents: I’m not a good cook, I can’t clean, and I can’t sew. The only thing I can do well is shoot bow and arrow—which I learned to do for “The Hunger Games” and will probably never come in handy—and act. Imagine me 100 years ago: I would have been pointless.”

The “I’m not as pretty as Photoshop makes me!” comment: Last February, the actress—and semi-perplexing face of Dior —wanted us all to know that the Dior images are as much a surprise to her as they are to us. Lawrence told “Access Hollywood” “Oh my god, I haven’t seen this. That doesn’t look like me at all. I love Photoshop more than anything in the world. Of course it’s Photoshop, people don’t look like that.” Honest, but still self-deprecating.

The “I was a weird kid!” comment: In August, Lawrence sat down with Vogue for seven hours (and proceeded to drink booze the whole time) and revealed a bit about her childhood. “I was a weirdo“I wasn’t picked on or anything. And I wasn’t smarter than the other kids; that’s not why I didn’t fit in. I’ve always just had this weird anxiety. I hated recess. I didn’t like field trips. Parties really stressed me out. And I had a very different sense of humor.” Not a strange comment in and of itself, but coupled with all the others, it’s just like “of course you were weird.”

The “My boyfriend and I split because of a sponge!” comment: During that same Vogue interview, Jen said the following:  “I wake up earlier in the morning when I have new sponges. “That counter doesn’t even see it coming. [Nicholas Hoult] would never wring them out. We were in the kitchen once, and I picked up the sponge, and it was soapy and wet, and I was like, ‘See?’ These are the kinds of things that make me think we are never going to work.’”

In summary, it’s clear that Lawrence goes the extra mile to prove to us that she’s a  level-headed girl who’s in on the joke, so to speak. While that’s totally true, if she embraced her fame and enjoyed its perks without sidebar commentary, it wouldn’t make us like her any less.