She could only keep quiet for so long—but now Jennifer Lawrence is speaking out about the naked photo scandal that rocked the nation, the entertainment industry, and the actress on a very personal level. 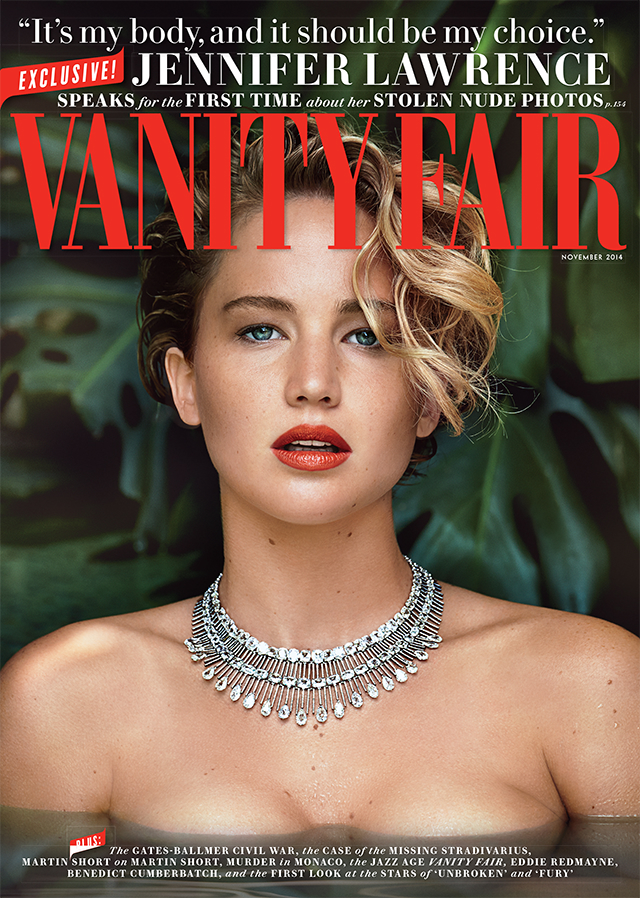 In Vanity Fair’s November Issue, which hits newsstands this Thursday, the cover girl and “Hunger Games” star  doesn’t shy from revealing her true feelings about the nude photos:

On why she didn’t react publicly, until now: “Every single thing that I tried to write made me cry or get angry. I started to write an apology, but I don’t have anything to say I’m sorry for.”

On the horror of telling her father: “When I have to make that phone call to my dad and tell him what’s happened … I don’t care how much money I get for ‘The Hunger Games.’ I promise you, anybody given the choice of that kind of money or having to make a phone call to tell your dad that something like that has happened, it’s not worth it.”

On friends who’ve seen the pictures: “Even people who I know and love say, ‘Oh, yeah, I looked at the pictures.’ I don’t want to get mad, but at the same time I’m thinking, I didn’t tell you that you could look at my naked body.”

MORE: Is Jennifer Lawrence Really as Normal as she Says?

On why it’s NOT okay that this happened in the first place: “Just because I’m a public figure, just because I’m an actress, does not mean that I asked for this. It does not mean that it comes with the territory. It’s my body, and it should be my choice, and the fact that it is not my choice is absolutely disgusting. I can’t believe that we even live in that kind of world.”

On the legal ramifications of the hack: “It is not a scandal. It is a sex crime. It is a sexual violation. It’s disgusting. The law needs to be changed, and we need to change. That’s why these Web sites are responsible. Just the fact that somebody can be sexually exploited and violated, and the first thought that crosses somebody’s mind is to make a profit from it. It’s so beyond me. I just can’t imagine being that detached from humanity. I can’t imagine being that thoughtless and careless and so empty inside.”

On her feelings of tabloid journalism: “You have a choice. You don’t have to be a person who spreads negativity and lies for a living. You can do something good. You can be good. Let’s just make that choice and—it feels better.”

And finally, on getting closure: “Time does heal, you know. I’m not crying about it anymore. I can’t be angry anymore. I can’t have my happiness rest on these people being caught, because they might not be. I need to just find my own peace.”

A class act, that Jennifer Lawrence. You can read the full interview tomorrow on VanityFair.com.