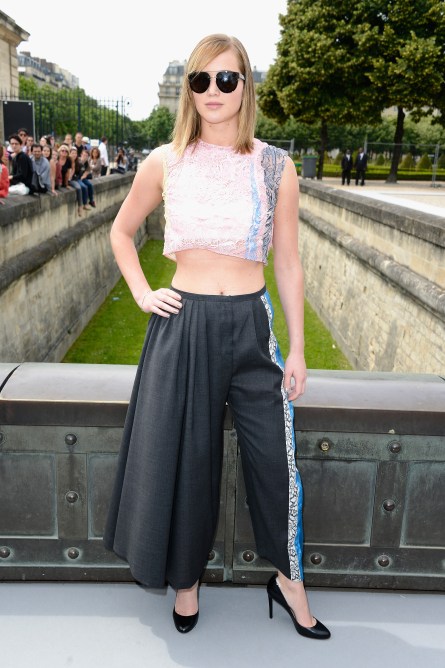 We’re always game for red carpet risks, especially when they pay dividends, such as Ciara’s revealing two-piece Saint Laurent ensemble at last night’s BET Awards. However, Jennifer Lawrence‘s recent attempt to color outside the fashion lines in a two-piece look from Christian Dior’s Resort 2014 collection makes us wonder if the luxury brand and the face of Miss Dior are having a lovers spat. That, or Jennifer is way more comfy in jeans than she is in this high-fashion ensemble that (honestly) wouldn’t look that great on anyone.

Attending the Dior Haute Couture Fall 2013 show in Paris earlier today, the 22-year-old actress decided to hop on the crop top bandwagon, but clearly got off at the wrong stop. Let’s begin this style dissection at the bottom: her feet! Not only are JLaw’s clunky black pumps weighing down her otherwise summery outfit, but she’s got a serious case of visible band-aid lines—a rookie mistake if we’ve ever seen one.

If analyzed separately, her wide-leg cropped pants aren’t terrible, but when paired with a boxy crop top, their voluminous silhouette looks a bit off. As for her crinkly pink crop top, it’s gorgeous, but “The Hunger Games” star would have looked (and felt, probably) so much chicer if it was paired with a high-waist skirt, or high-waist slim trousers.

We’re big fans of the Oscar-winning actress, but it seems that her contract with Dior often finds her looking notably uncomfortable in couture creations on various red carpets. Here’s hoping JLaw wastes no time breaking out a bad-ass Dior gown so peace can be restored to both parties.

One thing about this look we are loving: Her incredibly chic and flattering haircut, that’s making us want to head to the salon for a summer chop, stat.