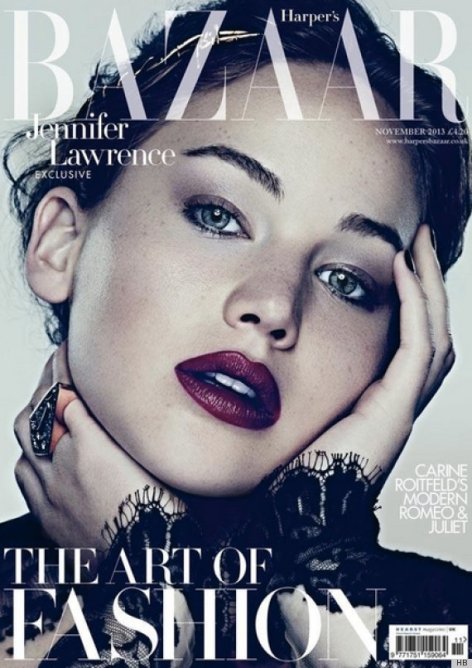 Unlike many of today’s young starlets, Jennifer Lawrence is unabashedly candid in interviews, and we love her all the more for it. In the November 2013 issue of Harper’s Bazaar UK, the 23-year-old “Hunger Games” star (the second installement comes out in December) get’s asked by interviewer Tom Shone what she likes most about her life, and quipped back: “money.” Refreshing, no?

J.Law has also never shied away from talking about the pressures placed on Hollywood actresses to conform to certain unrealistic beauty standards, and  Just Jared obtained a quote from the magazine where she opens up about what it felt like to be called fat at the beginning of her career:

“I was young. It was just the kind of s–t that actresses have to go through. Somebody told me I was fat, that I was going to get fired if I didn’t lose a certain amount of weight. They brought in pictures of me where I was basically naked, and told me to use them as motivation for my diet. [Someone brought it up recently] and they thought that because of the way my career had gone, it wouldn’t still hurt me. That somehow, after I won an Oscar, I’m above it all. ‘You really still care about that?’ Yeah. I was a little girl. I was hurt. It doesn’t matter what accolades you get. I know it’ll never happen to me again. If anybody even tries to whisper the word ‘diet,’ I’m like, ‘You can go f–k yourself.'”

In fact, when the “Hunger Games” came out, a New York Times critic commented on how Lawrence didn’t look “hungry enough” to play Katniss, and that “her seductive, womanly figure” stood in the way of the film’s message. The remark led the actress to tell Elle, “in Hollywood, I’m obese. I’m considered a fat actress.”

Another highlight from the issue is  J.Law discussing her obsession with on set catering. “My bodyguard Gilbert, right before they call ‘action,’ I’m like, ‘If there aren’t Cheez-Its here by the time they call cut, just go home.’ And he’ll start running. It cracks me up how seriously he takes it …. It’s not my performance that is motivating me. I want to get the on-set catering,” joked Lawrence.

As beautiful as Lawrence looks on the cover, we can’t help but notice she doesn’t look like herself, which seems to be the case for most of her high fashion spreads. In fact, when Jennifer Lawrence, first saw a shot from her own Miss Dior handbag campaign on the Oscars red carpet back in February, she even said, “that doesn’t look like me at all. I love Photoshop more than anything in the world. People don’t look like that.”

When Lawrence’s second effort for the fashion house came out last month, she looked gorgeous, but her face was clearly slimmed down and washed out to achieve that iconic Dior look, while all signs of pores and lines were erased. On the Bazaar cover, the actress’ face also look visibly thinner. Kudos to J.Law for speaking honestly about retouching, but maybe she’d make more of an impact if she also took a stance against heavily photoshopped images of herself being published. 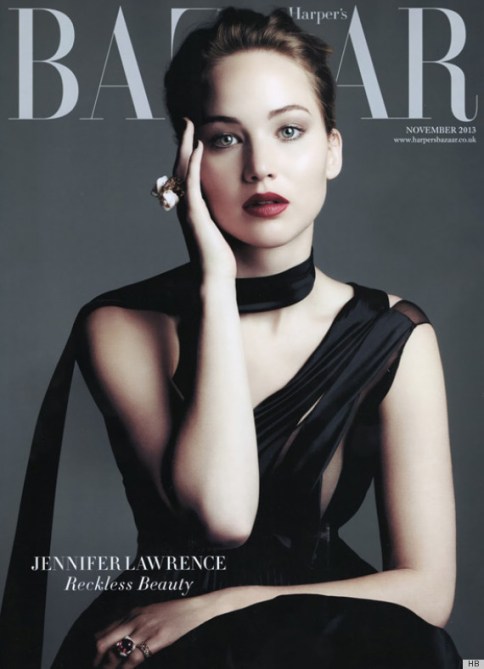 What do you think, is there nothing wrong with celebrities looking unrealistic in editorials and advertisements so long as they’re open about the use of photoshop?