Round two. Jennifer Garner and John Miller are back together days after Ben Affleck and Jennifer Lopez’s reunion. Us Weekly reported on Tuesday, May 4, that Garner and Miller, the CEO of the technology company CaliGroup, are “back on” after their split in 2020.

“Jen and John are back on,” Us Weekly‘s insider said. “It started up a few weeks ago.” News broke of Garner and Miller’s relationship in October 2018. The couple split in August 2020 after more than a year together. Before her relationship with Miller, Garner was married to Affleck for 10 years. The couple, who married in 2005 and separated in 2015, share three children: daughters Violet, 15, and Serafina, 12, and son Samuel, 9. Miller shares two children with ex-wife Caroline Campbell. A source told Us Weekly in August 2019 that the two bonded over their co-parenting experiences.

“John and Jen are in similar places in their lives and can relate to raising kids after a divorce,” the insider said. “They’re on the same page and understand where things stand.” As for why Miller and Garner split in the first place, a source told Us Weekly in August 2020 that Garner wasn’t ready for another marriage. “He was ready for marriage and she just couldn’t commit,” the insider said. “They parted on very amicable terms.” 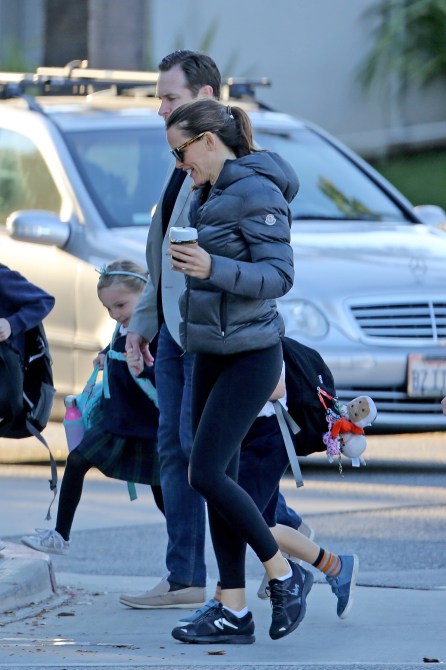 Garner and Miller’s reunion comes after news that Affleck and Lopez, who got engaged in 2002 and split in 2004, have been “hanging out” again after the Selena star’s split from her fiancé Alex Rodriguez in April 2021. Page Six reported on April 30 that Lopez and Affleck have been secretly “spending time” at her $28 million home in Los Angeles after her breakup with A-Rod.

To keep their meetups a secret, the newspaper reports that Affleck is picked up in a white Escalade SUV at the Hotel Bel-Air by J-Lo’s security and driven to the “On the Floor” singer’s home, where he stays for a few hours before he’s returned to his car at the Hotel Bel-Air parking garage. “Security picks him up at a nearby location and drops him off after spending a few hours at her house,” Page Six’s insider said.

As for what Garner thinks of Lopez and Affleck‘s recent reunion, a source told Entertainment Tonight on May 2 that Garner “isn’t bothered” at all about what her ex-husband does.

“Jen isn’t bothered by Ben hanging out with J.Lo or anyone else. She wants what is best for Ben,” the insider said. “What matters most to her is Ben being a great dad. They’ve been in a good groove when it comes to co-parenting for a while and their kids’ happiness is Jen’s main priority.”