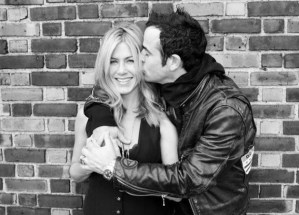 Well, this is very exciting news. People reports that Jennifer Aniston and her boyfriend Justin Theroux have made it official and gotten engaged this weekend. His rep stated, “Justin Theroux had an amazing birthday on Friday, receiving an extraordinary gift when his girlfriend, Jennifer Aniston, accepted his proposal of marriage.”

Interestingly enough, sources claimed last week that the two were on the rocks. Obviously, this wasn’t the case. Also of note is that there were rumors that the actress’s longtime nemesis (in the press at least) Angelia Jolie was marrying Aniston’s ex-husband, Brad Pitt, in France on Saturday.

We’re thrilled about the engagement and look forward to the obvious discussion of what Jen will wear for the big day. Are you as excited about this as we are?