Some fans may remember how on Jennifer Aniston’s birthday, Justin Theroux made sure to give her a shout-out on social media. Well, now it looks like his ex-wife is returning the sweet gesture: The Friends alum took to her Instagram Stories on her ex-husband’s birthday to celebrate his day, and honestly, we are so here for these friendly exes.

Theroux, who turned 50 on Tuesday, August 10, received a couple of thoughtful messages from Aniston, 52, over on social media. “HAPPY BIRTHDAY JT,” Aniston captioned a photo of Theroux wearing a suit with his rescue dog, Kuma, in the background. The Morning Show star went on to add another funny flick to the mix, where the Leftovers alum could be seen shirtless and throwing up some rockstar hands while wearing a Nike visor and a gold ring. “Truly one a kind,” Aniston wrote over the image, adding, “LOVE YOU!”

Theroux, for his part, also took to Instagram to celebrate his milestone birthday. “As a kid I couldn’t begin to imagine what 50 looks like… and yet of course it looks like this,” he captioned a photo of himself in character for HBO Max’s upcoming limited series on the Watergate scandal, The White House Plumbers. “Both dumb and hilarious at the same time,” he joked. Theroux continued, “Thank you life. Subverting my expectations for 5 decades. Always funny, always profound…You win again.” 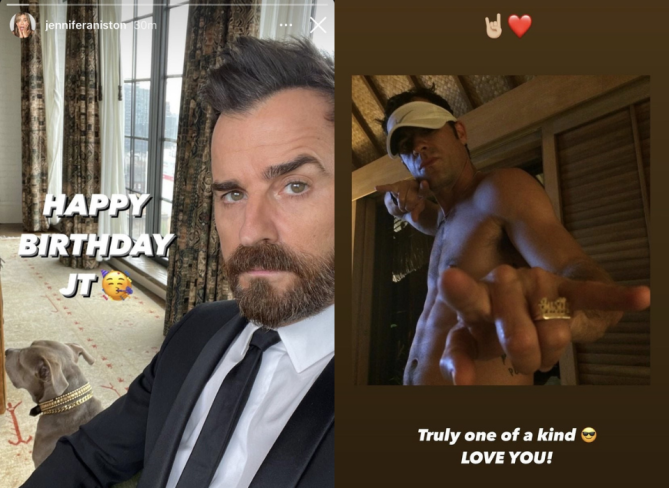 Aniston and Theroux announced their separation in 2018 following two years of marriage and six years together. In their statement, the former couple made clear that they were “best friends” and they would continue to maintain the “love” they had for one another.

“This decision was mutual and lovingly made at the end of last year. We are two best friends who have decided to part ways as a couple, but look forward to continuing our cherished friendship,” their announcement read. “Normally we would do this privately, but given that the gossip industry cannot resist an opportunity to speculate and invent, we wanted to convey the truth directly. Whatever else is printed about us that is not directly from us, is someone else’s fictional narrative. Above all, we are determined to maintain the deep respect and love that we have for one another.”

Nearly four years following their split, Theroux opened up about their friendship in an interview with Esquire, revealing they still FaceTime and text regularly. “We don’t talk every day, but we call each other. We FaceTime. We text. Like it or not, we didn’t have that dramatic split, and we love each other. I’m sincere when I say that I cherish our friendship,” he explained. Clearly, Aniston feels the same!