Jenna Ortega has met Drew Barrymore once. It was on her talk show, The Drew Barrymore Show, in 2021 to promote Ortega’s book, It’s All Love. Ortega had just finished filming Scream—the fifth movie in the Scream franchise, which Barrymore starred in more than 25 years ago as Ghostface’s opening kill, Casey Becker.

Ortega knew at the time that she filmed the opening scene in Scream 5, which honored Barrymore in various, subtle ways. “We paid such intense homage to Drew, whether it was the pink sweater or playing with the knife in the knife block,” Ortega tells StyleCaster while promoting her brand ambassadorship with Neutrogena.

The only issue is she couldn’t tell Barrymore any of it. “She asked me about Scream. I couldn’t say anything. I couldn’t do anything, but I guess people took what I said from that interview and assumed I was opening kill, and I got so nervous,” Ortega says. “Talking about Scream is so nerve-wracking because everything feels like a spoiler and people will twist anything regardless of if you revealed anything.” After the interview, however, Ortega received an email from Barrymore congratulating her on becoming a part of the Scream family.  “I didn’t talk to her then, but she gave me a message through an email that was really sweet and endearing,” Ortega says. “She’s a part of Scream. She’s the principal. She’s part of the core. I have yet to talk to her in person face to face, but I adore her.”

Of course, fans know that Scream 5 isn’t Ortega’s first horror movie. She’s also starred in the black comedy The Babysitter: Killer Queen; the scary movie Studio 666; and the slasher film X. As Gen Z’s current Scream Queen, Ortega is used to washing off stage blood, dirt and heavy makeup from her face at the end of the day. Her secret to clean skin is Neutrogena’s Stubborn Texture Cleanser . “I’ve been working a lot recently on jobs that require heavy makeup or a lot of stage blood and dirt. The Stubborn Texture Cleanser is a good exfoliant,” she says. “It gives me a clean palette and I can go to work the next day, whether it be on set again or a photoshoot. I feel refreshed and rejuvenated when I leave that old stuff behind.”

For Ortega, beauty is more internal than external, a lesson she learned from Neutrogena. “It’s less about exterior beauty and more about internal beauty because skin is a reflection of you taking care of yourself,” she says. “[Neutrogena] focuses on highlighting what’s already there. That’s a really positive message, especially for young girls in a day and age where they go online and just see photoshopped images or highlights of people’s lives.”

Ahead, Ortega talked to StyleCaster about her “nerve-wracking” audition for Scream 5, what she hopes for her character, Tara Carpenter, in Scream 6, and how her take on Wednesday Addams in Netflix’s upcoming show, Wednesday, is a spin fans haven’t seen from the character before. 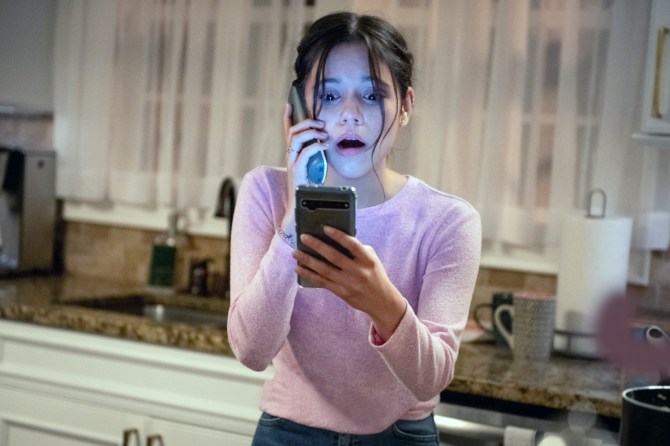 On her audition for Scream 5

“I had an audition scene with Melissa [Barrera who plays Sam], and it was our scene in the hospital, where I tell her she needs to get the fuck out. I did that one, and they asked me at the last minute if I’d be down to read this other scene. I read it and I realized it was opening kill. I got really nervous. I had to do a cold read for them, so I was just reading the script for the first time out loud as they watched me and I had to try to act without really knowing what was coming next. But actually shooting on the day, I was incredibly nervous. It was scary, but it was probably some of the most fun I’ve ever had on a set. I love screaming and crying. I love being in pain. It was right up my alley. I’d do it again.”

On how she correctly guessed the killers in Scream 5

“I did not know who the killers were. The originals may have known, and the killers themselves. We didn’t hear anything. We shot in almost chronological order, so we could save the big reveal for the end. The last two weeks were the killer reveal, and we shot the scene. It didn’t even say it on the call sheet. It was something that you just kind of showed up for, and it happened. It’s funny because even the dynamic between the cast, things would always get awkward when someone would make a joke like, ‘Oh, you’re the killer.’ Or: ‘But you kill people right?’ And just waited for an actual response.

I kind of predicted it. I was pretty proud of myself. [I predicted] Richie. David Arquette even says it. ‘Never trust the love interest.’ It’s always the love interest. I kind of predicted Amber because Tara and Amber used to be girlfriends in a previous script, so I was like, ‘Oh, would they do a double romantic interest?’ She was also kind of mysterious and defensive about me. I don’t know—maybe it’s just my own personal trust issues leaking onto the script.”

On her hopes for Tara in Scream 6

“We didn’t get to know who Tara is. She was just screaming and crying the whole time. To establish some personality or see her be badass, that would be a cool venture for her. I also love the relationship between her and Melissa Barrera’s character, Sam. They get off on a rocky start, and it’s nice to see if there could be two final girl sisters.”

On if she would reprise her role as Ellie in You

“I would be down. The writers are brilliant. Penn [Badgley, who plays Joe] is so talented and does such a good job. I know he’s not entirely fond of his character, but he really does do it so well. I love Ellie. That was my first venture out of the Disney realm and in the thriller and horror genre. I would love to come back to that show. I miss Ellie. I’m excited to see where Joe goes in general, but if Ellie could be involved, I would love that.”

On her audition for Wednesday

“I had been filming X in New Zealand, and we were doing night shoots. I had been up for almost 24 hours. I was told I had to get on a phone with Tim Burton at the end of my day. I was wearing prosthetics, and I had a long cut across my lip and I had glycerin in my hair, so my hair was all oily and peely. I was tired, delirious, and I got on this phone call. I did two scenes. I wasn’t looking to do another television series because I’ve done that so much and I’ve been doing more film. But Tim—even the opportunity to meet him would’ve been an honor. Also Wednesday had never really been represented in the Latina light, even though she is Latina, and I think that’s really important. It would be cool to give that layer and level of representation to girls who look like me or are a part of my community. I read with them. I wasn’t feeling too confident in my read. I remember I sent my mom tapes of me doing the scenes after like, ‘Do you think this would’ve been better? Maybe I should’ve gone this way.’ The actual shooting of the show was really interesting. There were so many different paths we could’ve taken for this character. I know that’s weird to say because she’s deadpan. But even while filming, we tried so many different reads and so many different options. I hope it’s something people agree with and like. We did try to do something a little bit different. I just hope it’s received and I do her justice.”

Scream 5 is available to stream on Paramount Plus. Here’s how to watch it for free.