When it comes to the Kardashian-Jenners’ inner circle, Jen Atkin is a face that you like recognize. The hairstylist has worked with each sister for years to craft their signature, Pinterest-worthy hairstyles. Atkin has been a part of the Kardashian-Jenner glam squad for so long that she’s practically family, which is why she was especially defensive when a beauty blogger came for her client, Kim Kardashian, and her KKW Beauty empire.

On Thursday, Gelcream, a beauty reviews Instagram with more than 50,000 followers, reviewed KKW Fragrance’s latest product, KKW Body. In their review, Gelcream slammed Kim’s perfume as “a celebrity using fame as a tool to sell us some 💩.” Gelcream called out KKW Beauty’s no-returns and no-exchange policy and compared Kim’s business to “basic formulas” and “generic products” In the end, Gelcream left Kim with a 3/5 review for the perfume and a 0/5 for KKW Beauty as a whole. But that wasn’t before Gelcream called Kim a “monster” and claimed that she was a “mirror reflection of America’s current generation.

“Isn’t Kim just a mirror reflection of our generation? I am afraid it was us who created this “monster”. I am keeping this perfume as a symbol of America. I can’t return it anyway. $60 + another $15 for tax and 10-day shipping — 3/5 for the perfume, 0/5 for KKW beauty brand,” Gelcream wrote.

Seeing what Gelcream wrote about her friend, Atkin took to Gelcream’s Instagram comments to slam the reviewer for writing a “nasty” review. In her comment, which was later screenshotted and posted on Gelcream’s Instagram story, Atkin called Gelcream a “miserable human being” for not supporting Kim, despite Kim’s influence on social media and her role in helping people make social media full-time careers. “YOU ARE MISERABLE HUMAN BEING PLEASE STOP BEING SO NEGATIVE AND START SUPPORTING WOMEN WHO HAVE HELPED MAKE IT POSSIBLE FOR YOU TO MAKE A LIVING ON INSTAGRAM. YOU SHOULD BE THANKING @KIMARDASHIAN,” Atkin wrote. (Gelcream notes in their Instagram bio that they do not accept sponsored content or ads.)

Atkin went on to criticize Gelcream for calling Kim a “monster” and writing a biased, “nasty” review. The hairstylist ended her rant by telling Gelcream to “STFU” and “do research” to learn that Kim’s business is fully-fledged with hundreds of employees and doesn’t “shit out products like legacy brands.”

“STFU YOU HAVE NO IDEA HOW HARD SHE WORKS ON THIS BRAND. THEY EMPLOY HUNDREDS OF PEOPE AND DONT JUST SHIT UT PRODUCTS LIKE LEGACY BRANDS. YOU NEED TO DO RESEARCH,” Atkin wrote. 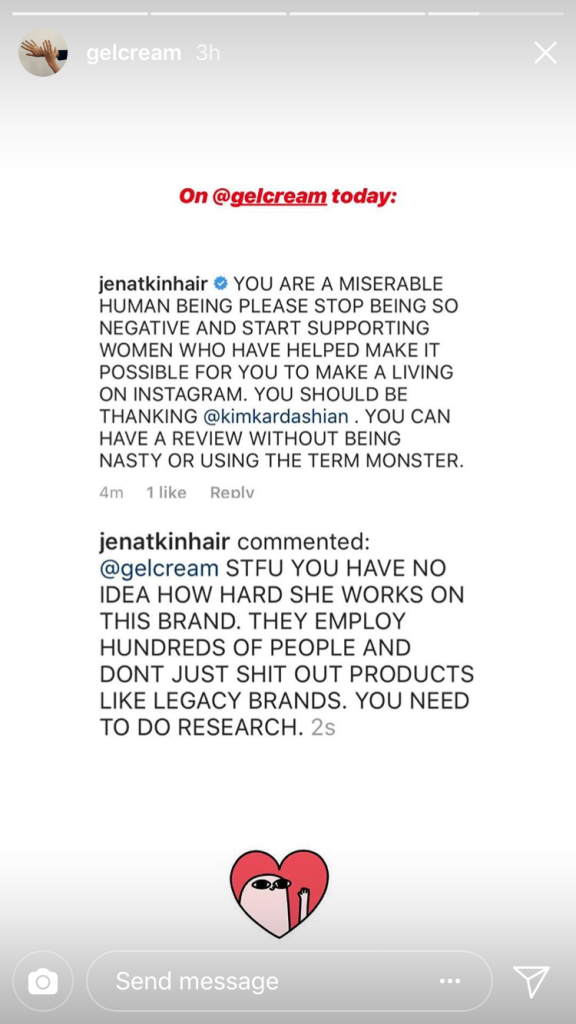 This isn’t the first time that Atkin and Gelcream have disagreed. In 2017, Gelcream reviewed three of Atkin’s OUAI Haircare products. In one review of OUAI’s Dry Shampoo and Foam, Gelcream gave the products themselves a positive review. But when it came to Atkin’s brand, the Instagram said that OUIA has “no soul” and that the packaging doesn’t feel “special” or “unique.” In the comments, Atkin defended herself, claiming that OUAI is “full of soul.” When Gelcream responded by explaining that they weren’t a fan of OUAI’s luxury branding, Atkin countered by expressing that a brand can be both “relatable and luxury.” “our vibe is relatable and luxury it’s ok to have two tones. There’s no right and wrong in my opinion,” Atkin wrote.

A month later, Gelcream reviewed OUAI’s Wave Spray. Gelcream expressed that they were “not impressed” by OUAI’s spray, which they called a “very basic product inside nice packaging.” “Left me with 0 emotions: not good, not bad,” Gelcream wrote. In the comments, Atkin defended that spray is one of OUAI’s bestsellers and that Gelcream’s negative and largely subjective criticism was like “calling someone’s baby ugly.”

“I appreciate your opinion but also only putting positive vibes out there is good for the soul,” Atkin wrote. “Because at the end of the day you’re going to offend someone who has worked and dreamed really big to make these products a reality. It’s like calling someone’s baby ugly you know?”

As you can see, Atkin’s initial comments toward Gelcream were cordial, so what happened between then and Gelcream’s KKW Fragrance review, we’re not sure. Both tones became a lot more harsh. We’re not sure what’s going to happen, but something tells us that Gelcream’s reviews of OUAI—if there are any more—won’t be as polite as they were before.