WWD reported this morning that Jay Z is rumored to be collaborating with Barneys New York on some mysterious partnership set to “perhaps” coincide with Barneys’ infamous holiday campaign. While rappers and fashion these days go hand-in-hand—so much so that Jay Z himself penned a track called “Tom Ford” for his most recent album—that wasn’t always the case, and especially not with Hova.

MORE: 5 Baby Pointers Kim and Kanye Should Take From Beyoncé

Back in the day, when 43-year-old Jay Z was still Shawn Corey Carter—a kid from the Marcy Projects in Brooklyn who was trying to escape the cycle of dealing drugs by penning verses he set to beats—he wasn’t wearing Tom Ford, or any designer for that matter. His wardrobe consisted mainly of oversized white T-shirts or basketball jerseys, which he paired with baggy denim drawers and sneakers which was, at the time, the standard uniform for hip-hop artists and enthusiasts.

Below, see a brief photo history of when exactly Jay Z became a fashion star. (Hint: it probably had something to with his marriage to Beyoncé.) 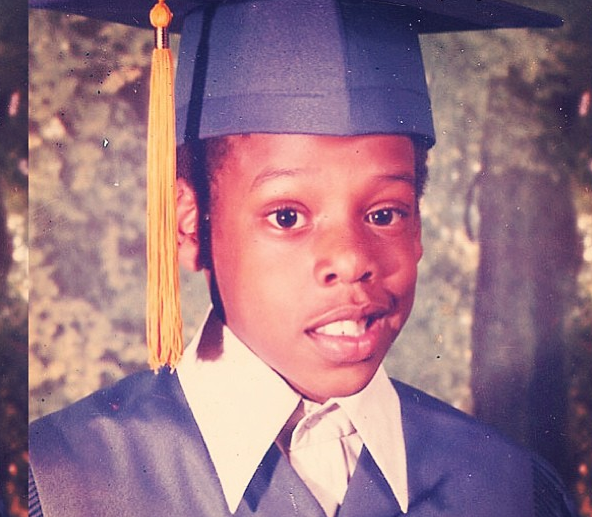 As a kid growing up in Brooklyn’s Marcy Projects in the 1970s, Shawn Corey Carter did well in school and excelled in—no surprise here—English and writing. Here, he poses for a school photo in full graduation regalia (though he never actually graduated from high school) including an oversized white shirt collar that we like to think is a pre-cursor to his giant Tom Ford bow ties.

2. Once he grew a bit, streetwear became the name of the game.

Once he got a little older, Hova blended in by wearing the hot streetwear looks of the late ’70s and ’80s, which mostly meant snapback caps, a gold chain of some sort, white tees, and in this case, a Nike windbreaker.

For his debut album “Reasonable Doubt,” which came out in 1996, Jay Z paid homage to the Godfather himself, donning a signature two-tone wide-brimmed fedora, a white silk scarf on top of a suit, and yes, the iconic pinky ring. But the fat cigar is the signature accessory for this look.

In 1999, Jay Z founded the apparel brand Rocawear, and starred in the debut ad campaign to promote the line. The range mainly consisted of fairly standard streetwear staples—hoodies, tall tees, baggy pants, and other hop hop regalia—but it stood out due to the high-octane celebrity name behind it.

Although Jay Z and Beyoncé’s first official collaborative effort, “Bonnie & Clyde ’03,” came out in 2003, they actually met years before that. In 1997, Beyoncé provided a featured verse on a song from rapper Amil, who was the first female signed to Jay Z’s label Roc-A-Fella records.

Here’s where Hova starts to swap out baggy jeans for white pants, hoodies for chic button-downs, and high-tops for flip-flops.

7. And it just kept getting hipper.

In the mid-200s, Jay—who at this point is often spotted around Brooklyn with Beyoncé—started embracing hipster staples like “nerd-chic” glasses and plaid shirts

9. And maybe even a little dad-like.

Although our dads aren’t married to Beyoncé or driving around in Maybachs.

Jay Z has been rocking this Theory shirt like it’s going out of style, often getting snapped rocking it like a true fashion lover—with the top buttoned fastened.

“And I don’t wear jerseys, I’m thirty plus/ Give me a crisp pair of jeans, buttonups/ S dots on my feet makes my cycle complete,” Jay Z rapped on his 2003 song “What More Can I Say?” At the time, he was 33 years old and already making his stamp on the fashion world on the hip of rising star Beyoncé.

Ten years later, he’s gotten the seal of approval from Tom Ford himself and continues to rock buttonups, crisp jeans, and a number of other chic looks that assure everyone: when it comes to fashion and style, he’s not going anywhere.