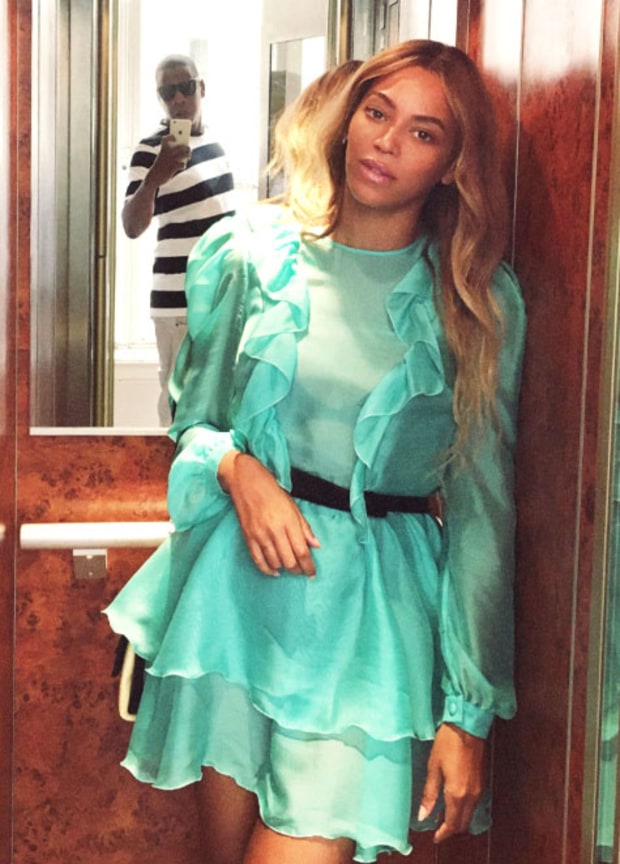 The inner-workings of the (very private) Carter family remain mostly a mystery, but Beyoncé, Jay Z, and Blue Ivy recently enjoyed a family vacation in Paris during the France leg of Bey’s Formation World tour, and even shared some snaps from the trip on the “Lemonade” singer’s personal website. And while the shots of Bey and Blue Ivy in matching floral dresses next to the Eiffel Tower are the epitome of #vacationgoals, it’s actually a different picture from the trip that’s going viral.

So cute: Bey and Blue Ivy on vacation in Paris. (Beyoncé)

MORE: The Most Naked Celebrity Snapchats of All Time

The snap we’re referring to is the above shot of Bey wearing a green, belted dress and posing against a mirrored elevator wall. While she looks great and all, it’s Jay Z’s epic pose caught in the reflection that’s taking over the internet. Whether or not Jay meant to be in the shot, fans are seriously amused, declaring the famous rapper to be Bey’s Instagram husband, and flooding Twitter with commentary and captions for the pic. One fan wrote, “Beyoncé doesn’t make Jay Z take these pictures. Jay Z makes Beyoncé take em,” and the guy who created the Instagram husband viral craze even commented.

Jay: I can’t get a good angle!
Bey: Don’t make me right another album about you .
Jay: Sorry, I’ll do better. pic.twitter.com/tpOBHwoZQg

I will never stop screaming at Jay Z in this photo. pic.twitter.com/q8UmFHXY0y

Jay-Z’s role in this picture exemplifies literally the only thing that makes me think I should get myself a man pic.twitter.com/x523hFxyw6

Made up a term, and now it has been applied to Jay Z and @Beyonce‘s relationship. My work is done. #instagramhusband https://t.co/cGz4xMcV9S

This actually explains a lot—the “Formation” star’s Instagram is largely free of photos of Jay, which is probably because he’s the one behind the lens. Go for it Bey, the same social media strategy’s clearly worked well for hundreds of bloggers before you.