Case in point: Jared Leto, who just won an Oscar for his role in “Dallas Buyers Club,” who was spotted looking appropriately dressed for Coachella Day 2, wearing a pair of skinny zebra-print pants, a faded old T-shirt, and a tartan plaid button-up ’round his waist. Because Leto is one seriously stylish heart throb, those weren’t any old department store pair of pants—those were Saint Laurent pants that retail for a cool $700.

Now, to be fair, the verdict is out on whether or not Leto bought these pants for himself or was given them to wear—but either way, it’s a pretty bold choice for a festival that often includes getting sweaty, dusty, and otherwise gross. (Would you wear a $700 anything to Coachella? We probably wouldn’t.) Then again, Leto has proven time and time again that he is no ordinary mortal—even at Coachella, his hair is flawless!—so if he anyone can pull off designer garb at a festival, it’s him.

Should these zebra-print beauties strike your fancy, you can head over to Luisa via Roma to shop them now. They’re technically menswear, but like most things Jared puts on his body, these pants could probably look just as good on the ladies. 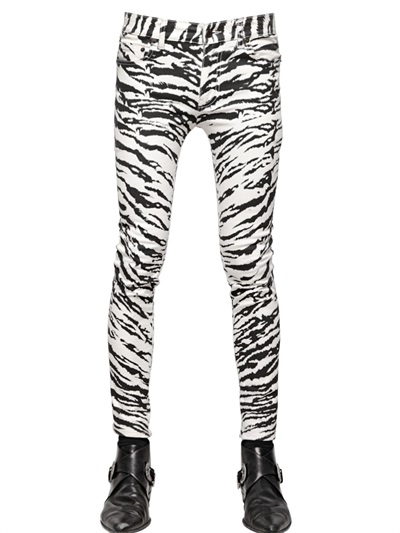