Since her feud with her sister, fans have wanted to know more about Jamie Lynn Spears’ husband and where he stands in her fight with Britney.

Jamie Lynn is Britney’s younger sister. She was born on April 4, 1991, and was the third and youngest child of parents Jamie and Lynne Spears. (They welcomed their first child, a son named Bryan, in April 19, 1977. Their second child, Britney, was born on December 2, 1981.) From 2005 to 2008, Jamie Lynn starred as the lead of Nickelodeon’s Zoey 101, in which she played Zoey Brooks. When she was 16 years old, Jamie Lynn announced that she was pregnant with her first child with her boyfriend at the time, Casey Aldridge. They welcomed the child, a daughter named Maddie Briann, on June 19, 2008, five months after their engagement that March. In November 2010, Jamie Lynn and Casey ended their engagement after almost four years together.

In her 2022 memoir, Things I Should Have Said, Jamie Lynn revealed that her pregnancy as a teenager caused issues in her family. “Once Momma and Daddy told my team, things spiraled out of control pretty quickly. When I walked in, Daddy, Bryan, and Momma were in the house and [a member of] my financial management team was on the phone,” she wrote. “There was a whole lot of fighting going on between everyone involved. The entire Spears team was already caught up in my sister’s PR difficulties, and everyone around me just wanted to make this ‘issue’ disappear. My family and management pulled me out of school until they could figure out what to do next. They took my smartphone away, fearing the news would get out, and insisted that no one share any information with anyone, especially the press. My daddy and I stopped speaking and the tension was terrible.”

Jamie Lynn went on to claim that her team, including her family, encouraged her to take “pills” to abort her baby for the sake of her “career.” “One person after another—and there were many—came to my room trying to convince me that having a baby at this point in my life was a terrible idea. There was lots of chatter, but none of it felt right to me,” she wrote. “It will kill your career. You are just too young. You don’t know what you’re doing. There are pills you can take. We can help you take care of this problem. Think about what you’re doing to your family. Doesn’t the family have enough to deal with? I know a doctor. There are procedures that remedy mistakes like this. You don’t have to do this.”

In the end, Jamie Lynn welcomed her daughter in June 2008. She’s since become the stepdaughter of her second husband. So who is Jamie Lynn Spears’ husband, Jamie Watson? Read on for who Jamie Lynn is married to and what he’s said about her riff with Britney. 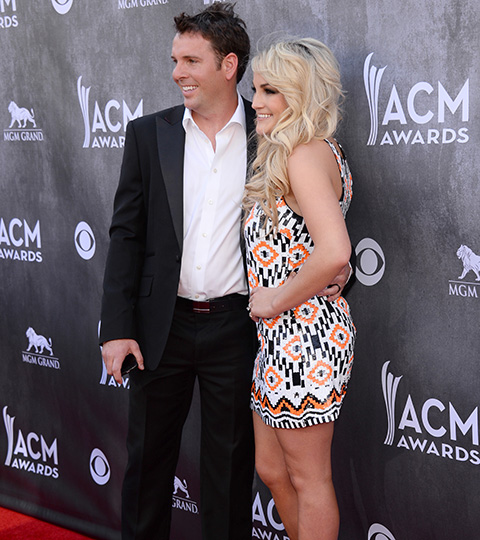 Who is Jamie Lynn Spears‘ husband, Jamie Watson? Jamie Lynn and Jamie, who runs his own company that sells electronics to corporations, met in 2010 through mutual friends after the Zoey 101 alum’s breakup with her ex-fiancé, Casey Aldridge, who is the father of her daughter, Maddie Briann. “Me and Jamie dated for about five years before we got married … but we broke up here and there, so maybe we dated for about four years,” Jamie Lynn said in 2016 TLC special, Jamie Lynn Spears: When the Lights Go Out. The couple married on March 14, 2014, in New Orleans, Louisiana. They welcomed their first together, daughter Ivey Joan, in April 2018.

During the special, Jamie claimed that he didn’t know Jamie Lynn was Britney’s younger sister when they met. “I’m just a normal guy with a normal job,” he said. “I did not know about the family. I didn’t know she had a TV show. I didn’t know anything about her.“ Jamie Lynn also revealed during the special that it wasn’t love at first sight with her and Jamie, but they grew to love each other. “But it was love pretty quick,” she said. “I think we grew on each other, which is probably why we are still together.” She continued, “He was always uncomfortable. … looking back though, I think it’s kind of sweet, because he was acting that way because obviously he liked me.”

Jamie also noted in the documentary that one of the reasons he fell in love with Jamie Lynn was because of her relationship with Maddie. “I knew I wanted to marry her when basically I had fallen in love with Maddie just as much as her,” he said.  “And I couldn’t not be a part of her or Maddie’s life.” Jamie Lynn added, “I didn’t feel anxious or any of that stuff. I just felt safe.”

What has Jamie Lynn Spears’ husband said about Britney?

What has Jamie Lynn Spears’ husband, Jamie Watson, said about Britney? In an interview with The New York Post  in June 2021, Jamie defended his Jamie Lynn from critics who accused her of complicity in Britney’s conservatorship. “I can assure you her family loves her and wants the best for her,” he said. “I wouldn’t be around people who weren’t. Who wouldn’t want to be in support of Britney?”

Jamie’s comment comes after Britney slammed her family at a court hearing on June 23, 2021, where Britney accused her father and conservator, Jamie Spears, of “abusive” acts such as putting her on lithium against her will, forcing her to keep an IUD and not allowing her to marry or have children. Jamie has been the conservator over Britney’s $80 million estate since her conservatorship was created in 2008. At the hearing, Britney also slammed her family for doing “nothing” to stop her father. “Not only did my family not do a goddamn thing, my dad was all for it. Anything that happened to me had to be approved by my dad…My whole family did nothing.” she said.

Britney also told Los Angeles Superior Court Judge Brenda Penny at the hearing that she wants to “sue” her “family” for their part in her conservatorship. “Considering my family has lived off my conservatorship for 13 years, I won’t be surprised if one of them has something to say [against ending my conservatorship],” she said. “I just don’t like feeling like I work for the people who I pay.”

She continued, “I would honestly like to sue my family, to be totally honest with you,” she said. “I also would like to be able to share my story with the world, and what they did to me, instead of it being a hush-hush secret to benefit all of them. I want to be able to be heard on what they did to me by making me keep this in for so long, it is not good for my heart. I’ve been so angry and I cry every day. It concerns me, I’m told I’m not allowed to expose the people who did this to me.”

In August 2020, Jamie Lynn was named as the trustee of Britney’s estate by Jamie and Britney’s lawyer, Andrew Wallet. According to the legal documents, Jamie is the “sole beneficiary” of the SJB Trust, which was created by Britney in 2004 to protect her sons Sean Preston and Jayden James’ financial future and her fortune.

According to the docs, when Britney dies, Jamie Lynn will receive “the entire principal of the Trust, including all accused and undistributed and unrealized income.” That amount will also be combined with “any insurance on the settlor’s life or other assets payable to the Trust as a result of settlor’s death [and will be] distributed by the Trustee to the trustee or co-trustee of the BJS Kids & Family Trust.”

In an interview on Good Morning America in January 2022, Jamie said that she “adored” Britney when the two were young and that her older sister “felt like another momma.” However, as she wrote in her book Things I Should Have Said
, Britney’s behavior—which she described as “erratic, “paranoid” and “spiraling”—changed as they became older. “i can’t really speak to anyone else’s state of mind.” “I don’t think that’s fair,” she told GMA. “But I’m allowed to say how I felt in those [moments], because that matters. It matters that I was in pain.”

Jamie Lynn also revealed that she was “happy” when she learned that Britney’s conservatorship was terminated in 2021. “I was happy. I was,” she said. “When it was put into place I was 17 years old. I was about to have a baby, so I didn’t understand what was happening. Nor was I focused on that. I was focused on the fact that I was a 17-year-old about to have a baby. I understand just as little about it then as I do now.” Jamie Lynn also confirmed that she didn’t have access to Britney’s estate. “There was no like me overseeing funds or something like that,” she said.

She continued, “I’ve always been my sister’s biggest supporter. So when she needed help, I set up ways to do so. Went out of my way to make sure that she had the contacts she needed to possibly go ahead and end this conservatorship and just end this all for our family. If it’s going to cause this much discord, why continue it?”

Jamie Lynn also claimed that she talked to Britney’s former legal team about dissolving her conservatorship and it “did not end well.” She also told GMA that she took steps to help Britney but it was her sister’s job to “walk through the door” on her own. She continued. “Everyone has a voice, and it should be heard.”

Jamie Lynn also responded to an Instagram Britney posted in July 2021 of Jamie Lynn’s performance of a medley of her songs at the 2017 Radio Disney Awards. “Honestly, it was somewhat confusing to me about that, and I actually have spoke to her about that,” she said. “I was doing a tribute to honor my sister and all the amazing things that she’s done. have cleared up with the fact that I don’t think she’s personally upset with me about that. Truthfully, I don’t know why that bothers her.”

While Britney has unfollowed Jamie Lynn on social media, Jamie Lynn confirmed to GMA that there’s “still” love between her and her older sister. “That love is still there. 100 percent. I love my sister,” she said. “I’ve only ever loved and supported her and done what’s right by her, and she knows that, so I don’t know why we’re in this position right now.”

Framing Britney Spears is available to stream on Hulu. Here’s how to watch it for free.