One of my favorite things about the evolution of fashion is how you’re basically allowed to say “fuck it” to every single rule. With the consistent takeover of menswear to be for all genders (we’re still working on men wearing dresses in the mainstream, but I believe we’ll get there), there’s been an increasingly popular trend of wearing whatever you want because it’s comfortable. Jameela Jamil pairing a silk suit with sneakers to the BlogHer Health conference is all the encouragement we need to stop dressing how people expect us to, and start living our comfiest lives.

On Friday, the actress and activist posted on her Instagram story a video of her en route to speak at the BlogHer Health conference. In the video, Jamil showed off her conference-ready outfit: a beautiful Roberto Cavalli floral suit paired with—wait for it—white Adidas sneakers. The suit itself is gorgeous—black and red silk that’s fun and polished at the time. And while many people would choose to wear heels with such a high-end suit, Jamil opted stay comfortable in sneakers. We didn’t think it was possible to love Jameela Jamil more than we already do, but this ‘fit has us bowing down. 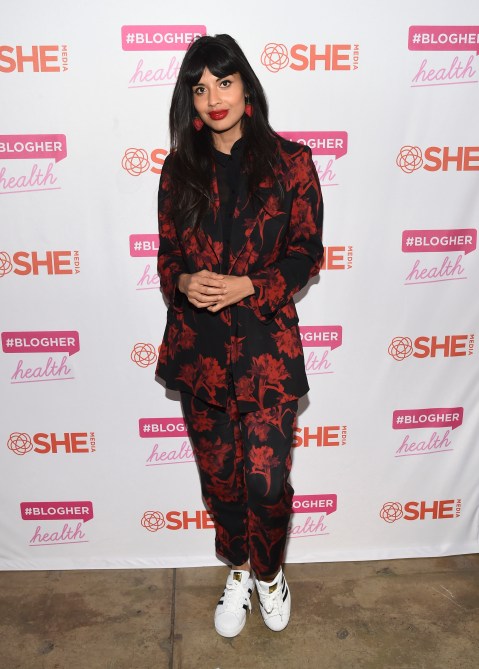 Jameela Jamil has recently become known as an extremely vocal advocate for body positivity. However, the actress actually began attempting to make an impact in the body positivity movement several years ago, after being fat-shamed by the media when she gained weight. During the BlogHer Health conference, Jamil reminded us of the problems she faced trying to be a voice for body positivity: “The worst thing about this, is that i’ve been talking about this for six or seven years… Now that I’m slimmer, people are finally listening to me say the same thing I’ve been saying for fucking years.”

Having struggled with pressure to adhere to certain beauty standards as well as an eating disorder, the actress has had enough of body shaming in the media. So, she started the “I Weigh” movement, which aims to get women talking about their amazing qualities and lives instead of negatively focusing on their bodies. The body positivity movement is lucky to have you, Jameela Jamil.