“There is no such thing as a perfect family.” Jaime King makes this clear when describing her new film, “Bitch,” a “genreless” indie, in which King plays the sister of a woman who begins acting like a dog (a literal bitch) after feeling unappreciated by her husband and children. “And if a perfect family does exist, I want to see it because I guarantee you that there are cracks in whatever it is,” King says.

Raised by a mom who never judged her for her gender-fluid sexuality growing up, and now, parenting her kids with the same gender-neutral values, King has a lot of opinions on family dynamics. It’s likely why she wasn’t surprised when she learned the premise of “Bitch,” which was inspired loosely by a real-life case of a Scottish woman with empty nest syndrome who started “barking and eating like a dog,” after her children left the house. “Her complete identity was wrapped up in taking care of her family and her children,” King says. “When they were gone, that was her way of dealing with things.” 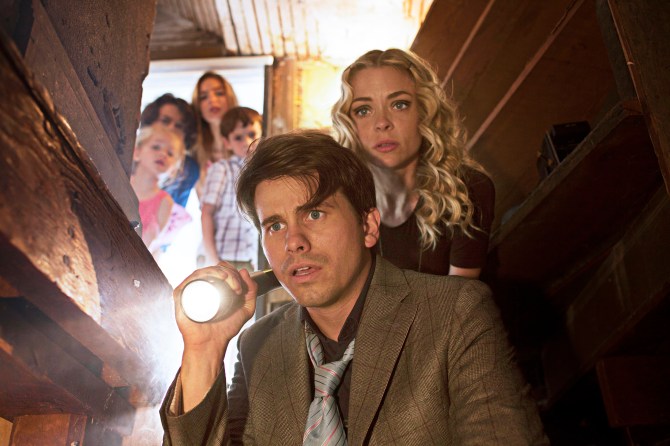 And though King doesn’t see “Bitch” as a “left-feminist story,” she admits that the film’s themes still resonate with the way she thinks of herself in an age when there remains a pressure for wives and mothers to prioritize everyone else before themselves.

“As a mother, as a wife, as a partner, and a human being, it’s really hard. It’s really fucking hard for me to ask for very simple things that I know would fulfill me,” King says “I feel a great sense of duty to the people around me and I have a fear that was instilled in me from the minute that I was born in this society that I have to work harder and I have to be completely self-sacrificing in every single thing that I do.”

As a mother, wife, and human being, it’s really hard for me to ask for simple things that I know would fulfill me.

Raised in a working-class household in Omaha, Nebraska, King—the daughter of a stay-at-home mom and handyman—grew up dreaming of a career that would expand her life beyond her small-town neighborhood. Given her family’s financial struggles, King was a quick target for bullies, who teased her for her clothes (sewn primarily by her mom, a former seamstress) and her introverted personality.

“I didn’t have enough money to buy fancy things,” King says. “I was bullied and ridiculed because I looked a certain way, but I didn’t have the means to fulfill whatever that picture was. I wasn’t a cheerleader. I wasn’t going to be a jock. I was an introverted, artsy kid in a place where that wasn’t accepted.”

The bullying got so bad that King recalls nights when she would sleep in her room, only to wake up to bricks and fireworks thrown through her window, lighting her bed on fire. She cites her mom as helping to keep her sane amid the intense, and often violent, bullying. “She had to deal with a very artistic child who was being bullied and who had kids throwing bricks and fireworks through my window and lighting my bed on fire in the middle of the night,” King says.

Desperate to escape, King begged her parents to send her to modeling school, something she read might eventually lead her to a big city like New York, where she could pursue film. “I needed a way out, because I did feel like I was going to be physically hurt there,” King says. “I couldn’t withstand emotionally or spiritually the kind of bullying that I went through.”

After saving up, King’s parents obliged—a decision that King still reflects on today when thinking about her own children and their passions. “The fact that my mom would even get on a plane when she has four children and bring me to New York and let me follow my dreams when other parents are judging her and saying, ‘How can you do that?’” King says. “She really put everything on the line. I look at each one of my children and I accept them and love them. I don’t try to steer them to be something different according to what I want them to be. I follow their lead.”

I couldn’t withstand emotionally or spiritually the kind of bullying that I went through.

King’s mom’s acceptance of outcasts, particularly members of the LGBTQ community, is also the reason she and her husband, Kyle Newman, parent their sons—2-year-old Leo and 4-year-old James—without gender markers. King recalls her mom’s acceptance of her fluid sexuality, her gay older sister, and several LGBTQ youth (some of which her family took in) as why she never pressured her sons to dress or act in a certain way.

“I always remember feeling attracted to everyone. A stronger leaning toward men, but attracted to everyone,” King says. “My mom never judged me when I had relationships with girls. She was raising my sister, who came out at 17 in Omaha, when people were being killed for it. She was creating a safe space for all of us with little money and little time, but with a lot of love. So much of my inspiration is from her.”

King’s parenting style is also what led her to launch the first-ever gender-neutral clothing line for kids in 2016 with children’s clothing brand, Gardner and the Gang. “My son loves pink. I look at him and he’s not one way or another,” King says. “He’s just like David Bowie. He wants to wear sparkles and pink and bright, vibrant colors, and yet he’s in love with beautiful girls. But specifically, just a lover of everyone.”

However, despite widespread acclaim for her clothing line, King wants to make clear that she isn’t pushing an agenda. Instead, she encourages parents to omit gendered labels and allow children to explore their identity naturally.

“It’s not about me putting out an agenda: ‘You dress a boy in girl’s clothing because that’s what I think you should do or vice versa,’” King says. “It’s more, ‘If you like it, you wear it. Great.’ Why can’t kids just explore and be who they are? Why can’t they just wear rad clothes that are fun and cool and stylish that speak to their personality? Why do we have to have labels?”