Breaking her silence. After Jada Pinkett Smith and Will Smith’s Chris Rock controversy at the 94th Annual Academy Awards, the mother of two took to social media to reflect on the incident with a brief message for her followers.

For those who weren’t watching the Oscars, which aired on March 27, 2022, here’s a quick breakdown of what took place. The Smith family, along with comedian Chris Rock, were all in attendance at the star-studded ceremony in Los Angeles, California. Late in the broadcast, Rock took to the stage to present the Academy Award for Best Documentary (the win later went to Questlove for his 2021 film, Summer of Love). While presenting, Rock cracked jokes at members of the audience—including one comment aimed at Smith’s wife. “Jada, I love ya. G.I. Jane 2, can’t wait to see ya,” Rock said in part, drawing a comparison between Jada’s shaved head and actress Demi Moore’s buzz cut in the 1997 movie, G.I. Jane.

Pinkett Smith, for her part, has spoken publicly about her years-long struggle with hair loss due to a condition known as alopecia, an autoimmune disorder that attacks hair follicles and can result in permanent baldness. After Rock’s comment, Pinkett Smith was visibly upset and rolled her eyes from her seat in the audience. While her husband was initially seen laughing at the joke, her frustrated response seemingly elicited a different reaction from Smith when, moments later, he was seen walking up to the stage where Rock stood to deliver a curt smack across the comedian’s face.

Audience members and millions of viewers around the world watched along in confusion, with many uncertain if the slap was part of a scripted bit. But the ensuing exchange confirmed that this was unplanned. A visibly shocked Rock said, “Wow. Will Smith just smacked the shit out of me.” Smith, who returned to his table next to Pinkett Smith, proceeded to shout at Rock to “Keep my wife’s name out of your f—ing mouth.”

Days after the slap that shook the nation, Smith’s wife has finally weighed in on where she stands now. Keep on reading ahead for how Jada Pinkett Smith reacted to Will Smith slapping Chris Rock at the 94th Annual Academy Awards.

How did Jada Pinkett Smith respond to Will Smith slapping Chris Rock? 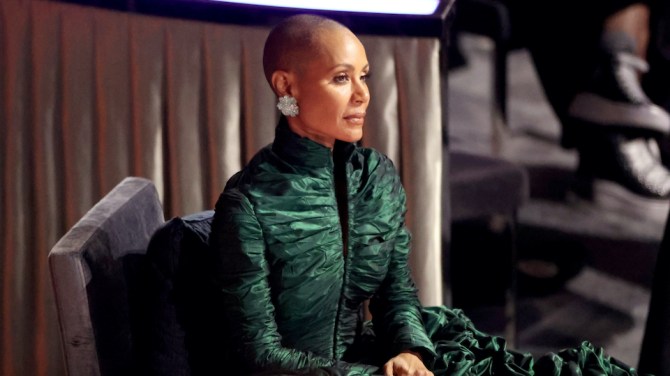 Two days after Smith smacked Rock onstage at the 2022 Oscars, Pinkett Smith took to her Instagram on March 29, 2022, to share a message about “healing” following the incident. “This is a season for healing and I’m here for it,” her brief statement read.

Pinkett Smith’s reaction came just hours after her husband issued an apology of his own on March 28, 2022, writing, “Violence in all of its forms is poisonous and destructive. My behavior at last night’s Academy Awards was unacceptable and inexcusable. Jokes at my expense are a part of the job, but a joke about Jada’s medical condition was too much for me to bear and I reacted emotionally.”

“I would like to publicly apologize to you, Chris,” the King Richard actor continued. “I was out of line and I was wrong. I am embarrassed and my actions were not indicative of the man I want to be. There is no place for violence in a world of love and kindness.”