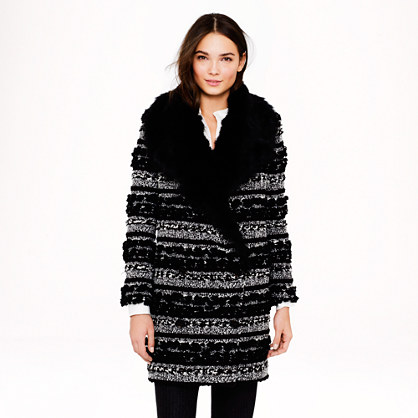 In July, J. Crew CEO Mickey Drexler agreed with some some disgruntled consumers and admitted that the label’s recent collections had ”strayed too far from the classics” and were—in all their mixed-print glory—possibly too overstyled. Drexler also urged shoppers to be patient, as the fall 2013 collection would be inching its way back toward the brand’s basics.

As promised, items in the label’s fall catalog (called a “style guide”) were more restrained in a sense—noticeably less bright colors, not as many Jenna Lyons-endorsed mixed prints, and no orange lipstick to be found—but the style guide also heavily featured pieces that are part of  J. Crew’s absurdly pricey “Collection” line, such as a pair of beaded pants that clock in at almost $900, and a short-sleeve sweater made with 35,000 crystals, sequins, beads and paillettes that costs a whopping $1,900.

Now, the brand is rolling out its winter gear, and we’ve noticed that many of the coats are even more expensive.

The above piece is called the Toscana Shearling Coat in Pom-Pom Tweed and costs $2,500. The product description acknowledges that it’s an investment, uses adjectives like “opulent,” and lets us know that the “plush tweed” is “sourced from a French mill known for their novel, high-end woven fabrics.” The smallest size—a 00—is already sold out.

Another coat featuring a jeweled collar (which was a favorite of Instagram-happy editors during NYFW last winter) costs $1,865, and is made from Italian alpaca and tweed. 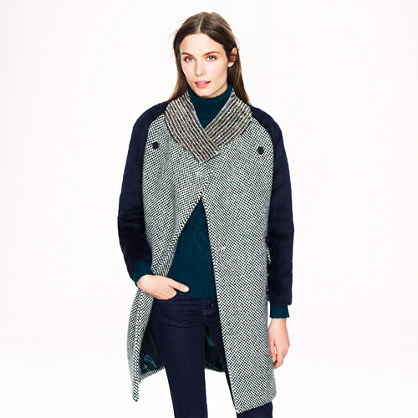 Other outerwear styles found in the high-end collection aren’t much cheaper—a camel-colored overcoat with a jeweled lapel is nearly $1,500, and a hip-length neon tweed jacket is $650—and surely will have loyal fans of the brand balking like they did during the fall, despite the fact that the retailer has been rolling out higher-end stuff for seasons.

Still, it seems J. Crew has been working overtime to find a balancing act between luring in the Fashion Crowd and hanging on to their pre-Jenna Lyons consumers, but with the introduction of these coats, it’s clear that prices are only going up. Not necessarily a bad thing for a brand looking to go in a higher-end direction, but it has drawn its share of skeptics.

You might recall that in September—after the Fall Style Guide was released—women’s website The Gloss decided to highlight 29 “terrible” looks from the catalog, and provide their own quippy content about how ridiculous and ugly they are, prompting a flurry of angry online comments from people who more than agreed, and who unleashed their J.Crew-directed wrath in the process.

“But seriously, what’s going on with J. Crew? I’m confused. These are awful. Objectively awful. Is someone trying to sabotage the company from within?” one commenter wrote, with others saying things like “WHAT ARE THESE?”  and “I think you could do this with most fashion lines. Only with J.Crew, we expect them to be affordable and pretty basic, so it seems even worse than normal.”

That’s the thing though: Nobody who’s been following the brand really expects it to strictly be affordable and basic, and the influx of $2,500 winter coats is proof of that.

What do you think? Is it a smart move that J. Crew is selling high-end stuff, or is it simply too expensive? Sound off below!