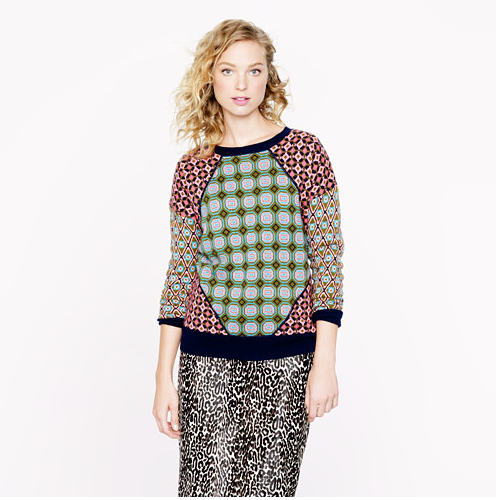 In July, J. Crew CEO Mickey Drexler agreed with some some disgruntled consumers and admitted that the label’s recent collections had ”strayed too far from the classics” and were—in all their mixed-print glory—possibly too overstyled. Drexler also urged shoppers to be patient, as the fall 2013 collection would be inching its way back toward the brand’s basics.

As promised, items in the label’s fall catalog (called a “style guide”) were more restrained in a sense—noticeably less bright colors, not as many Jenna Lyons-endorsed mixed prints, and no orange lipstick to be found—but the style guide also heavily featured pieces that are part of  J. Crew’s absurdly expensive “Collection” line, such as a pair of beaded pants that clock in at almost $900, and a short-sleeve sweater made with 35,000 crystals, sequins, beads and paillettes that costs a whopping $1,900.

Obviously, these items are bound to make people angry, and it seems that anger has spilled over onto the brand at large, and onto its lesser-priced fall pieces.

In an admittedly humorous post on The Gloss, one writer decided to highlight 29 “terrible” looks from the fall style guide, and provide her own quippy content about how ridiculous she thinks they are, prompting a flurry of angry online comments from people who more than agree, and who unleashed their J.Crew-directed wrath in the process.

“But seriously, what’s going on with J. Crew? I’m confused. These are awful. Objectively awful. Is someone trying to sabotage the company from within?” one commenter wrote, with others saying things like “WHAT ARE THESE?” “Some of these, like the grey dress at the bottom of the second page, might not be so terrible if the Style Guide had, you know, actually STYLED them,” and “I think you could do this with most fashion lines. Only with J.Crew, we expect them to be affordable and pretty basic, so it seems even worse than normal.”

Not to get too analytical about the world of online commenters, but this is clearly a case of a brand simply not being able to please everybody. Yes, most pieces in  J. Crew’s “collection” are insanely priced, but aesthetically, the looks have been styled with a lighter hand because shoppers thought they they were too styled before. And the comment about expecting J.Crew items to be affordable and basic kind of goes to show that the commenter hasn’t really been keeping tabs on the brand.

Of course, J. Crew will always have fans (there’s a reason why it’s opening locations all over the world), and people do need to accept that it’s not the same store it was in 1991, but by introducing such expensive items and using such precious vernacular to describe them (a $500 sweater is described as a “true work of art” having been “spun from the finest Italian cashmere with just a touch of mohair for extra loftiness” and consisting of a “special silk thread from Japan and was hand sewn by a master needleworker”) probably won’t draw praise from shoppers who are angry about getting priced out of a brand they once loved and trusted.

What do you think? Do you agree that J. Crew’s items are overpriced and impractical, or are you loving its fashion-forward direction? Weigh in!