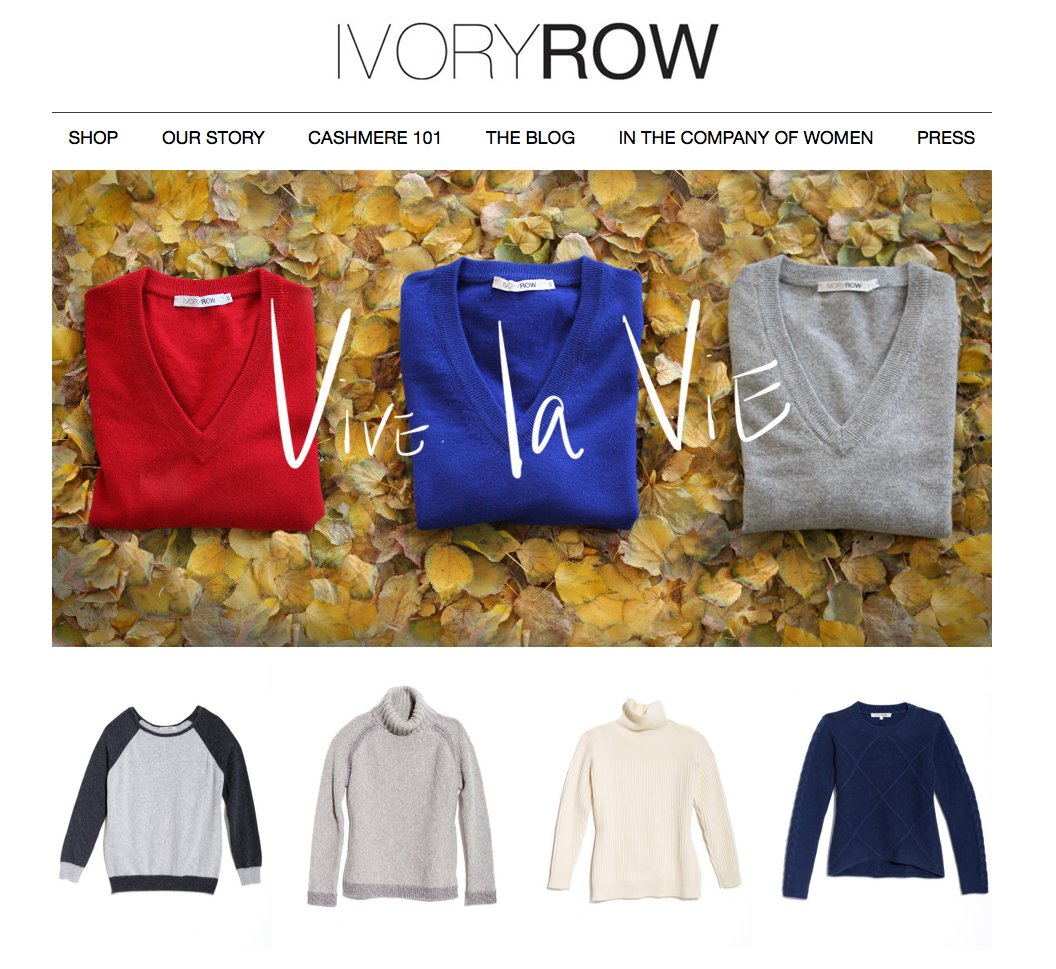 Around here, we’re endlessly fascinated by the wide world of online shopping, and it seems that every week brings with it a brand-new site to be obsessed with. Since keeping track of ‘em all can be a feat of epic proportion, we’ve decided to feature “A Site To See” each week, highlighting a cool retail website you’ll definitely want to bookmark. This week: a site called Ivory Row that offers direct-to-consumer cashmere pieces at half the price of traditional cashmere.

Why You Should Bookmark It: ‘Tis the gifting season, and it’s been (rightfully) argued that there’s no better gift than a soft sweater in a luxe cashmere. But if you’ve ever shopped the cashmere market before, you know that a quality sweater from the likes of Theory, Helmut Lang, and more brands cost upward of $400 to $500, topping out at more than $1,000. Grace Chang and Pierre Kim, co-founders of new e-commerce site Ivory Row, know that these exorbitant prices aren’t always just because of the high-end nature of the knit itself, but rather a result of the markups that come along with retail sales.

“We spent about a year doing market research into this,” Kim told StyleCaster. “And what we found was that you can either get really cheap cashmere at [fast-fashion stores], or super-expensive stuff that no one can afford at more than $1,000. We aimed to make cashmere, the most luxurious fabric, a much more affordable and attainable one. We spent a year working with mills in Italy that specialize in fabric for top fashion houses, and we figured out that cashmere didn’t need to be so expensive.”

The result: a website that offers exclusively high-end cashmere cardigans, turtlenecks, super cute and unique baseball sweaters, and more direct-to-consumer, for no more than $295.

“Once you go cashmere, you don’t go back,” Grace explains. “We were playing with the idea, and we just thought there was a large hole in the market. We wanted to fill it; we wanted to make it easier [to get cashmere] by cutting out the middle person. We design, we manufacture, and we sell it ourselves online.”

Why Cashmere: A little-known fact about cashmere is that it’s actually the type of animal it comes from, and how the wool is gathered, that makes it worthy of carrying the title.

“Cashmere gets very complicated,” Pierre says. “Some retailers call some fabrics cashmere but they’re really not. All our cashmere, whether it’s processed in Asia or in Italy, it’s coming from an actual cashmere goat from Mongolia. This is a different breed of goat.”

The only hair soft enough on a Cashmere goat to use for clothing grows on the underside of the animals’ necks; when the time is right, farmers collect the wool by using a gentle combing technique. To gather enough hair to construct one cashmere sweater, it takes about four years, which is another factoid that helps explain why cashmere can get so expensive.

“We think the concept of disposable clothing is terrible; it’s not worth spending money on,” Pierre adds. “We very much emphasize being timeless and classic; we appeal to someone who shops for years as opposed to seasons. A good cashmere sweater should actually last you 15 to 20 years. If you take good care of it, it shouldn’t start pilling after two months.”

Special Discount: Now through November 30—just in time for holiday shopping season—StyleCaster readers will receive a 10% discount at IvoryRow.com. When you head to check out, copy and paste this code: J7BMQJ3WWBVL.