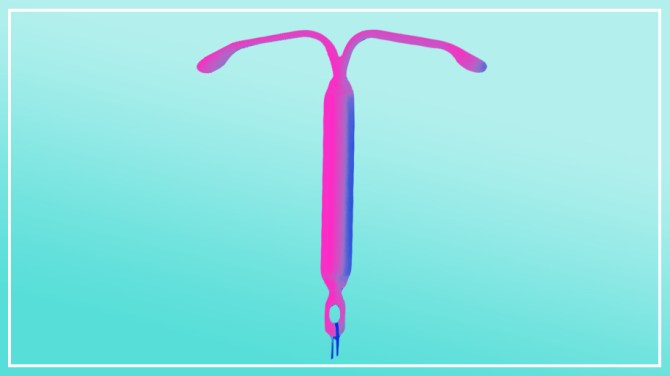 Like all birth control, an IUD comes with some serious pros and some not-so-great cons. (Illustration/StyleCaster)

It seems like 2015 has been the year of the LARC—otherwise known as Long-Acting Reversible Contraception. In New York City, the IUD is now the de facto birth control of choice, with the city pushing the tiny intrauterine device to women looking for a highly effective, reversible form of protection. Likewise, Colorado has launched an IUD pilot program with teens.

But four years ago, IUDs weren’t really a thing that people were talking about. I’d heard about them after doing some research and had to call around to several doctors just to get an appointment (“Do you have kids?” the receptionists all wanted to know. “This device isn’t FDA approved for women without kids.”). I had gathered the facts, and I thought getting a Mirena would be the answer to my (ahem) rather lax approach to taking the Pill. And because the device also emits a low-dose of the hormone progesterone, many women have lighter—or no—periods. I was obsessed.

But I’m here to tell you that despite the obvious perks, my Mirena hasn’t been a tiny plastic miracle. Dr. Natasha Bhuyan, a family care physician with One Medical Group in Scottsdale, Arizona, tells me that, like every form of birth control, the IUD has pros and cons.

“There isn’t any way of knowing how your body will respond to it,” she says, noting that women who have already had kids generally have an easier time with insertion.

The IUD is placed in the uterus, and that requires a fair amount of finagling—mainly, by opening up the cervix. “It can be more painful for women who haven’t had kids,” Dr. Bhuyan tells me, adding that women with heavy periods can also experience more pain and cramping than those who don’t have them, since “now your uterus is cramping on a foreign device.”

unluckily for me, I had both in full force. My doctor said taking two Advil before the appointment would be sufficient and that the procedure would be only mildly uncomfortable. But I straight passed out during the insertion process and browned out in the waiting room as I was leaving. I was embarrassed because none of the message boards I read showed symptoms as extreme as mine. I felt confused; I was ashamed. And to add insult to injury, the next month was one of intense cramping, bleeding, and general lady misery—period cramps on steroids and some pretty unattractive bloating.

My tiny plastic miracle was causing some not-so-tiny misery.

But—and there is a but—after that initial month (what I’m calling my Horrendum Mensis), things suddenly got awesome. Just like that, my period vanished, and I wasn’t subjected to the usual mood swings or cramps that came around like unwanted houseguests every month. On top of that, I knew that my new method was more than 99 percent effective at preventing pregnancy. And let’s not even talk about how much I saved every month on pads and tampons.

Dr. Bhuyan says that it’s important for women looking to get an implant or IUD to really weigh their options. “I don’t discourage people from getting an IUD; I just tell them to be aware of the processes. If they can get through the day or the week or the month with warm packs and painkillers, it might be worth it in the long run,” she adds. “Everyone just has to weigh her options.”

I tend to minimize trauma, and mere months later, I became that girl who was always talking about how great her IUD is. I even convinced several of my close friends to get one. And the numbers don’t lie: The IUD is definitely a popular choice. According to the Guttmacher Institute, IUD use grew 10.3 percent in 2012 from 2 percent in 2002, in part because this generation of IUDs is much safer than the Dalkon Shield, the rather scary IUD of the ’70s. Meanwhile, the Guttmacher Institute reports, methods like the Pill are on the decline.

One reason may be the Affordable Care Act, which requires health care providers to fully cover the cost of birth control. In 2011, before Obamacare had been passed, I paid more than $500 out of pocket, even with insurance (this was also when the Tea Party was in one of its rounds of trying to defund Planned Parenthood, and I wasn’t about to take chances).

In the end, my journey from using the Pill to the IUD is not unlike my quest to find the perfect partner—I’ve come to the realization that, like an “ideal” boyfriend or S.O., there really is no “perfect” form of contraception. Everything comes with strings attached (and in the case of the IUD, those are some literal strings), and each comes with distinct benefits. For me, dealing with a bad month is a fair tradeoff for four years of worry-free protection and no periods.

Since Mirena is good for only five years, I’ll need to weigh my options next fall. But like Dr. Bhuyan says, it’s all about picking something that’s right for you that you and your doctor (and, if you want, your partner) have talked about.

Will I get another Mirena when the time comes? Maybe. But the best thing is knowing that I’ve got options.