It was a chilly and windy day in Midtown in New York City, but K-pop idols ITZY brought warmth to their photoshoot with StyleCaster in mid-November. All five members Yeji, Lia, Ryujin, Chaeryeong and Yuna were glammed up in their best black attire and as soon as the camera turned on them, their smiles became fun and alluring…like a Cheshire Cat.

Just the day before the shoot, the quintet wrapped up the US leg of their Checkmate World Tour at The Hulu Theater in Madison Square Garden. The last time ITZY was in the States was in 2020, shortly before the COVID-19 lockdowns, which halted overseas performances for a while. With so much anticipation from ITZY’s fans, known as MIDZY, their performance was the perfect formula and culmination of all the hard work since their debut. ITZY graced the MSG stage with their worldwide hits “In the Morning,” “LOCO,” “DALLA DALLA” and “SNEAKERS”.

Each member had their own solo stage where they covered popular songs that matched their attitude and performing style, like Yeji’s fierce cover of Dua Lipa’s “Hotter than Hell” and Yuna’s bubbly rendition of Conan Gray’s “Maniac”. It’s no wonder that every single song was met with vibrant jumping and cheers from the crowd who were also pumping their fists in the air with their colorful light rings. The group say they were surprised and delighted by the amount of energy in the theater and expressed their gratitude for the constant support. “Every performance was filled with passion, energy and great love from our fellow American MIDZY fans,” says Yuna. 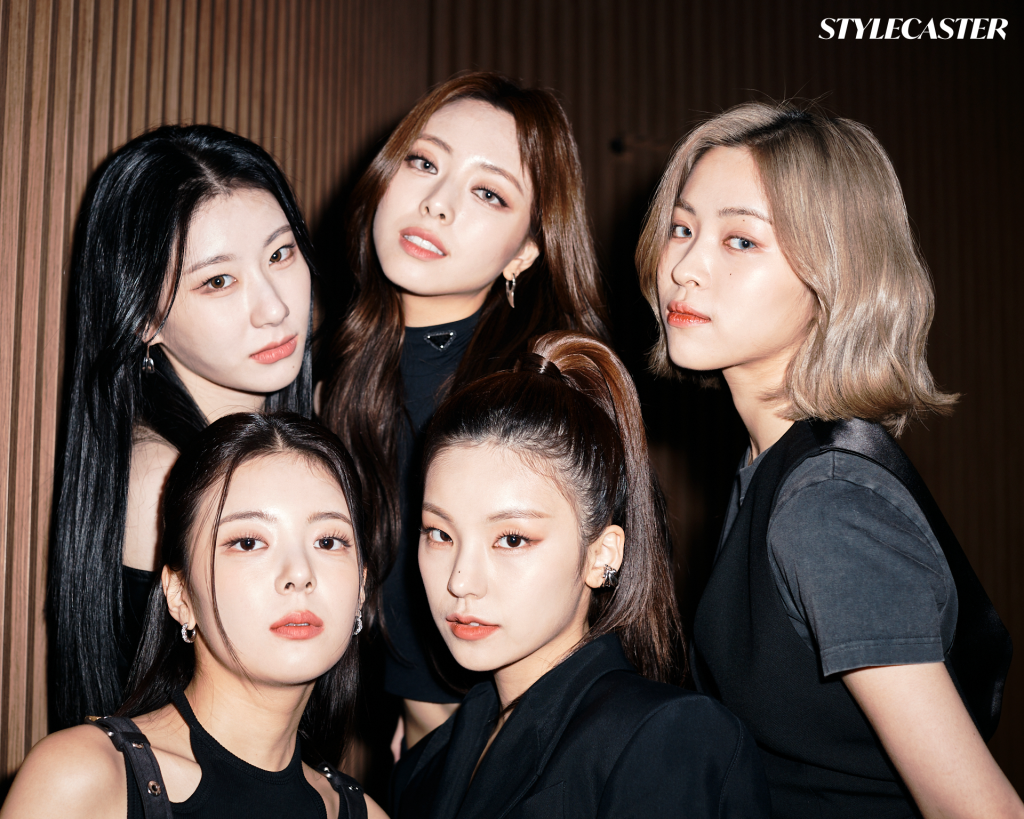 Despite being fresh off a tireless tour, the members were ready to jump onto their next project. The group’s sixth EP Cheshire was released on November 30, 2022, through JYP Entertainment and it immediately went viral. The lead single’s music video “Cheshire” garnered millions of views in the hours following its release. In the video, the girls flaunt their grins with their fluid hand movements and choreography with the lyrics “Why so serious?” and it concludes with their signature hand crown. “The title song “Cheshire” conveys a message of trusting your feelings because there is no right answer amid numerous unclear questions and concerns,” says Lia. The rhythm of the song, with its “la la las”, is almost hypnotic as it brings you down the same rabbit hole Alice fell through to get to Wonderland.

“Snowy” offers a similar sentiment with the interpolation of the familiar Beethoven’s “Für Elise.” The four-track mini-album cools off with “Freaky” where the girls brush off their feelings for a boy with “I’m in my zone, just leave me alone.” Rounding off the EP is the defiant English single “Boyz Like You” which was released in October. Like the third track, the girls tell off a boy who’s been using them, “Well, you must be going crazy thinking I’ll be back, I’m sorry / ‘Cause you’re crying like a baby, but do I look like your mommy?” The jump from being elegant to being staunch of their own feelings in their new EP highlights the fact that they are indeed one of the most versatile fourth-generation K-Pop girl groups. 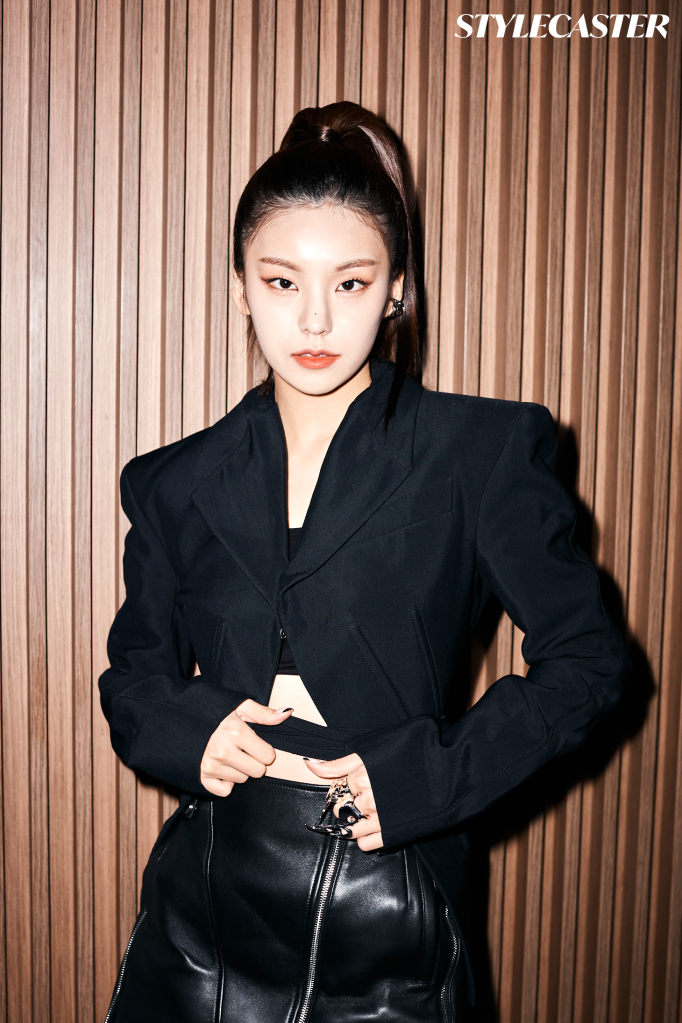 It’s been almost three years since your showcase and you just finished off the last stop of the North American leg of your world tour, how do you feel and how did it feel to perform in front of your international fans again?

YUNA: In my experience, performing all over US gave me a lot of strength. During this tour not only did I feel happiness within, but I also wanted to spread my happiness. It was great to experience the same level of energy we had three years ago. I was thrilled and filled with gratitude to our overseas fans who have been patiently waiting for our performance.

YEJI: It seems that time has flown by so fast that I can’t believe that the long-awaited US tour has already ended. It was a good experience because we made lots of memories with MIDZY fans. More so, it seemed like we were on the receiving end of energy throughout the entire tour. I’m already looking forward to the next tour!

CHAERYEONG: Performing for our fans once again in a while made it so much fun and thrilling. Thank you so so much for singing and dancing together with us!

“We thought it was about time to show another strength of ours. This album borrowed the image of the character Cheshire and tried to give it a little bit of a chic and mysterious image.” – Yeji

Was there anything that happened that was very memorable on tour?

LIA: Getting room service at the hotel with all the members and hanging out like this for once in a long time was really memorable.

RYUJIN: One day when we all had a day off, we got together, chatted and hung out. To me, that was the most fun and memorable episode. 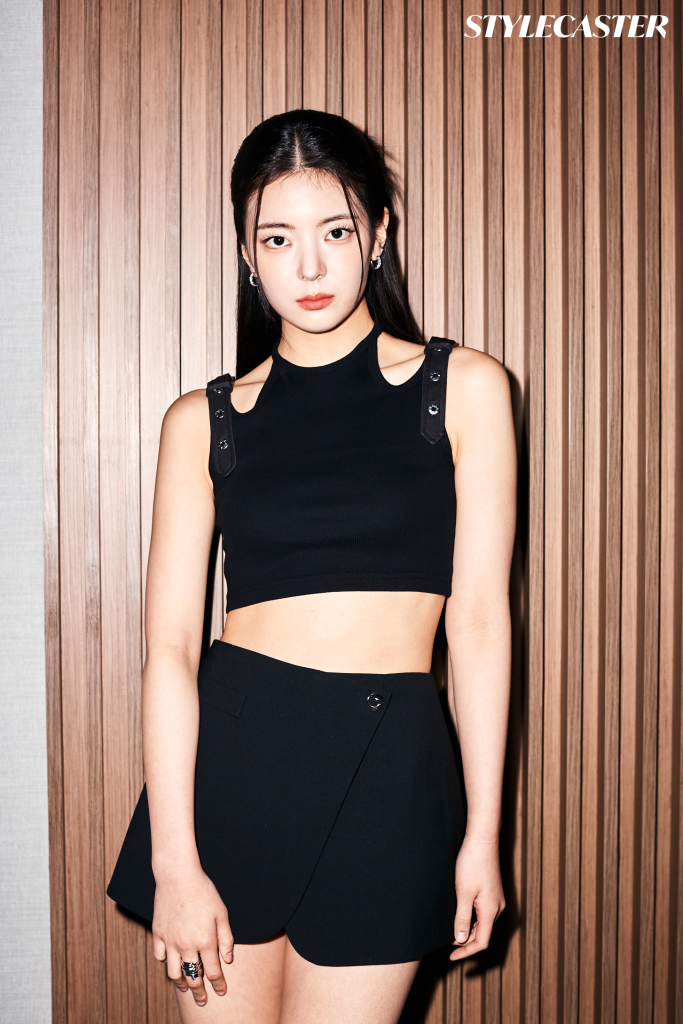 What do you love to do when you’re taking a break from performing?

YEJI: I mostly spend a lot of time alone. Being able to do what I want to do without worrying about others seems to be a stress reliever that also gives me a sense of freedom.

CHAERYEONG: Instead of being active, I enjoy resting in my room and restoring my physical strength! Recovery is important when you have an injury or muscle soreness, so I try to take care of my body whenever I can.

What song would you use to describe the US tour?

YEJI: It is “WHAT I WANT”. It is because meeting our MIDZY fans through the tour was the moment I truly wanted. 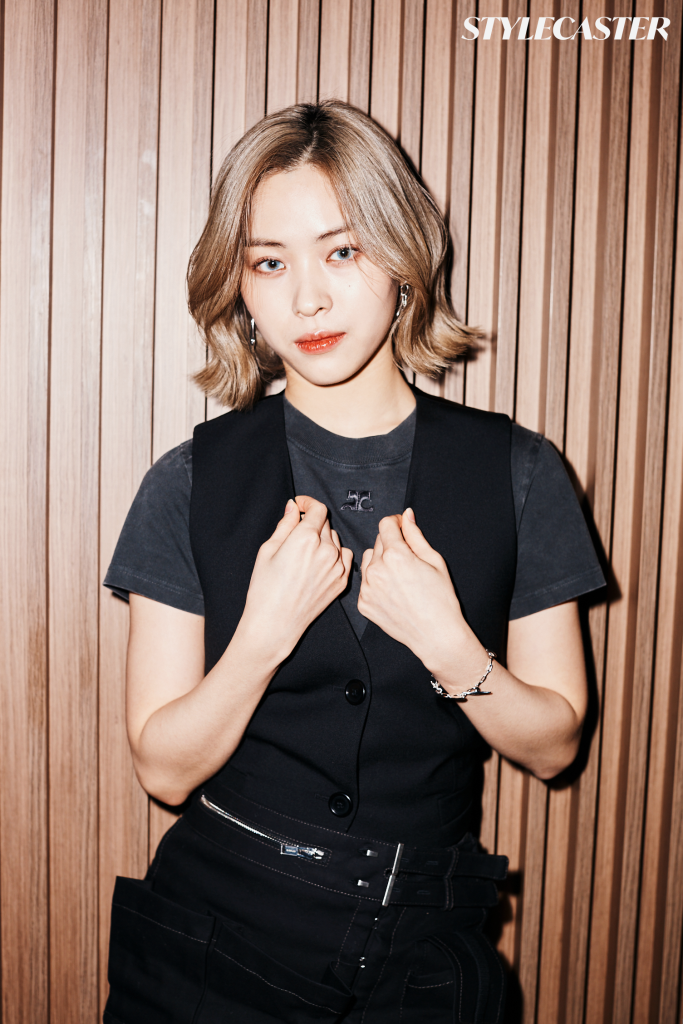 Was there a moment on tour when your friendship and bond with each other became stronger?

YEJI: It seems like every moment of the tour was like that! It was our first tour and I think it gave us more confidence and strength because we were able to do all the activities together and get closer to one another. During this tour, we became each other’s biggest support.

Tell us about your comeback with CHESHIRE. What’s the story behind it?

LIA: This album CHESHIRE consists of four tracks. The title song “Cheshire” conveys a message of trusting your feelings because there is no right answer amid numerous unclear questions and concerns. “Snowy,” “Freaky,” and the single in English “Boys Like You,” which was pre-released in October, are also included. We hope you show us a lot of love!

What was one highlight of recording CHESHIRE in the studio?

YUNA:  While preparing for this album, there were some songs I recorded in a dreamy atmosphere. And since I usually do a lot of light-mood songs or hip-hop-style songs, it was a new experience because I was able to discover my new voice that changes depending on the mood of the song.

CHAERYEONG: I feel that I tried to record the verse atmospherically and the chorus energetically. For the power of the chorus, I think it’s the first time I’ve recorded it with the fullest potential of my voice. It’s as if I’ve mastered it. When I was done recording, it seemed the recording studio was mine! I felt like I was making it happen. 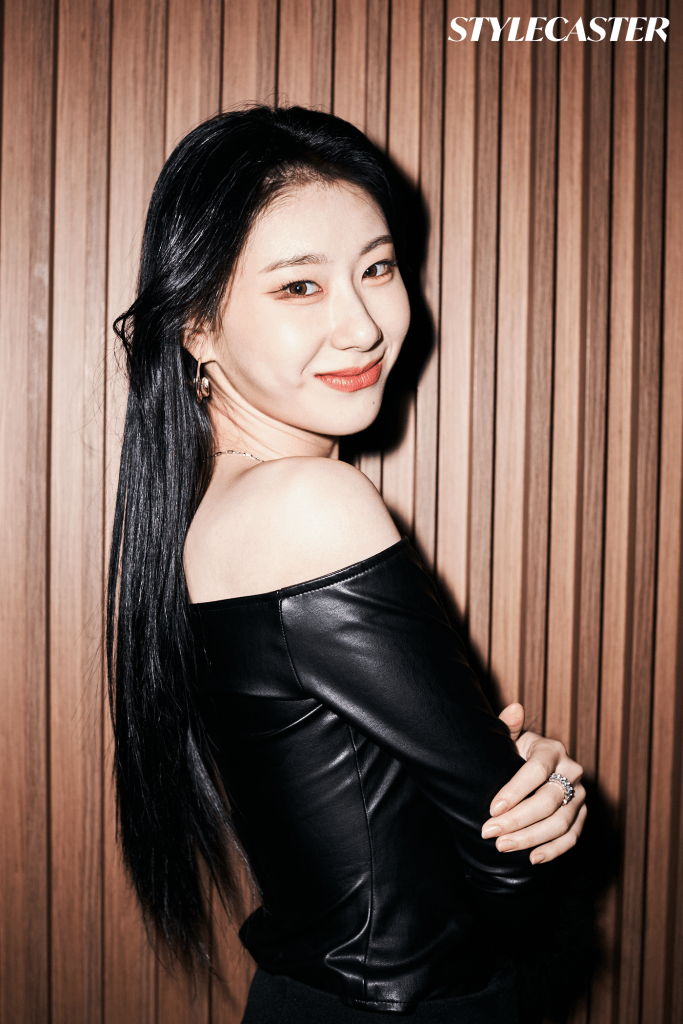 How did your style and fashion sense evolve when planning this mini-album?

LIA: There are many moves in CHESHIRE‘s choreography that involve lots of curves and bodyline accents, which stands out especially when we are wearing tight leggings and tight, bootcut pants. Remarks like this have been implemented!

YUNA: Our individual opinions were taken into consideration without deviating from the overall team concept. I feel like I was able to create a Cheshire YUNA style with a fit or color in accordance with my body type.

This concept seems darker than your previous one, how does it sound compared to the songs you released this year?

RYUJIN While “Sneakers” was definitely aimed to reflect a bright, refreshing, and exciting summer, I think “Cheshire” is a different song that makes the sound and beat itself deeper and a little darker.

YEJI: We thought it was about time to show another strength of ours. This album borrowed the image of the character Cheshire and tried to give it a little bit of a chic and mysterious image. I think that is also well expressed in the sound of “Cheshire”.

What song in CHESHIRE is a standout for you and why?

YUNA: I would say it’s “Cheshire”! I tend to improvise as my intuition tells me. And I think this song reflects my self-image the best.

CHAERYEONG: For me, it’s a B-side track called “Snowy”! I think the lyrics are fascinating and charming! And because I wanted to be that kind of person, I picked this song. 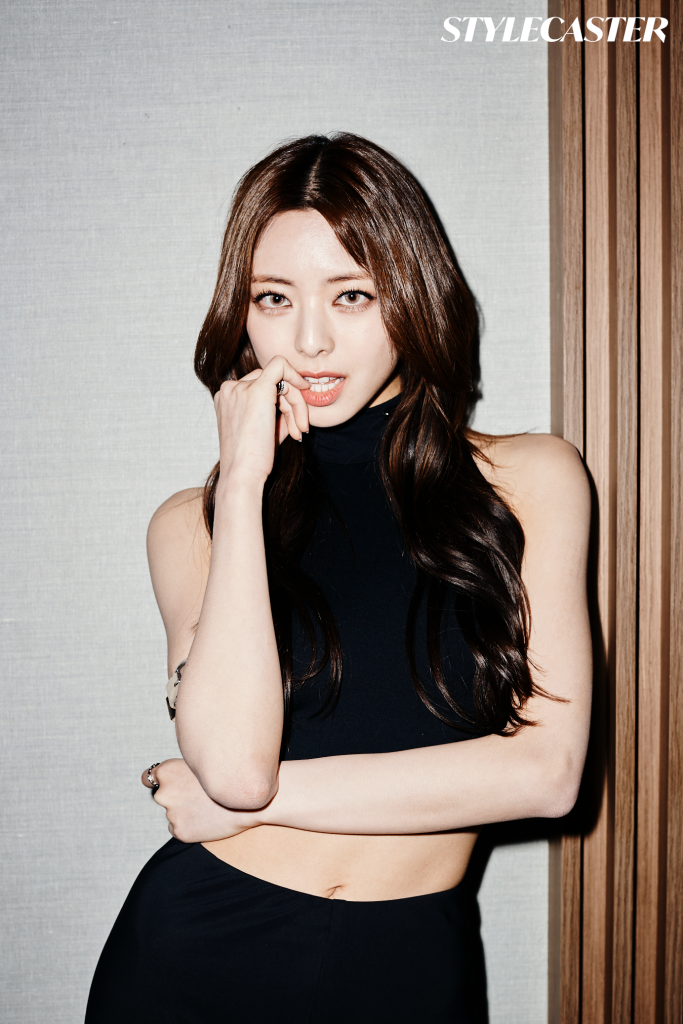 You mention that every member is multi-talented, well-versed in their own craft and focus and there are no set positions. While making the album, did you explore anything that you weren’t exactly used to?

RYUJIN: While recording, I feel like I have a new experience every time. With each of the many songs we were recording, I tried to use the tone that I normally don’t use. I think it was interesting and fun doing various takes.

What were some challenges when conceptualizing CHESHIRE?

LIA: I’m usually far from chic, so being chic was my challenge!

RYUJIN: Unlike before, where I’ve focused on energy throughout the entire process from recording to stage performance, this time I was focused on charm. I guess that was challenging for me. 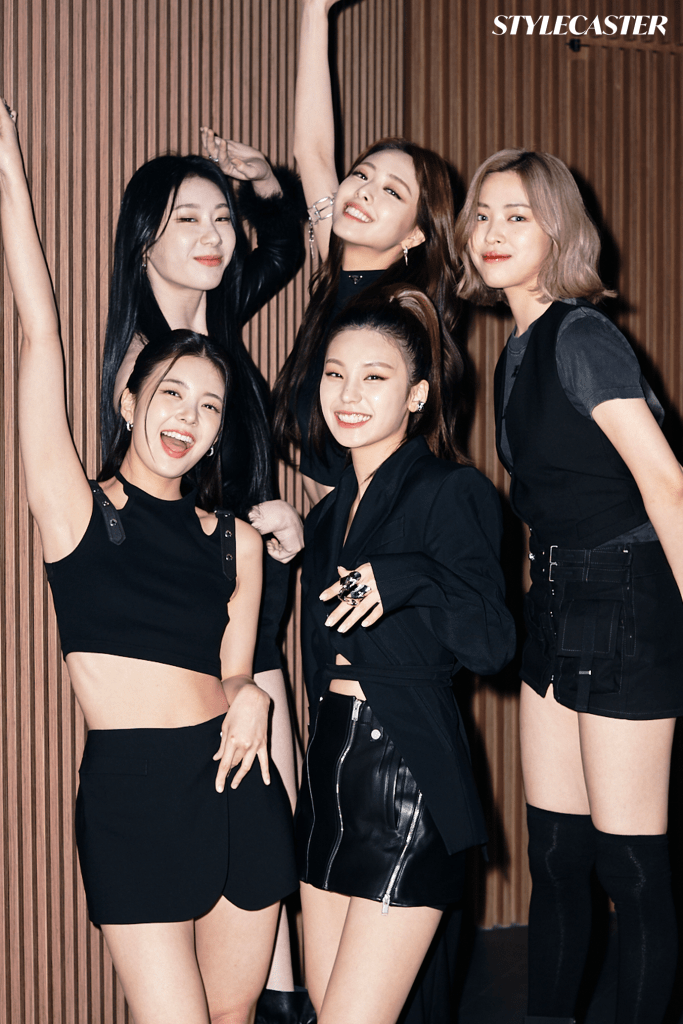 Are they any concepts you would like to try in the future?

RYUJIN: Actually, the concepts ITZY has done and have been doing are the concepts that suit me the best and I like them. So, I don’t think there is a concept I want to try out, but it’s just winter and I like Christmas, so if there’s a chance, I’d like to try caroling.

The last time we spoke was when you were releasing your first English album. You accomplished a lot of your goals in a span of a year, like making a song for MIDZY and exploring different concepts. What are your goals for 2023?

LIA: I hope that next year, following this year’s trend, we will have the opportunity to take another step forward and grow, and present our music to more people.

CHAERYEONG: In 2023, we want to show that ITZY still has a lot to give and our goal is to deliver our positive energy to more people.

This interview has been edited and condensed for clarity. 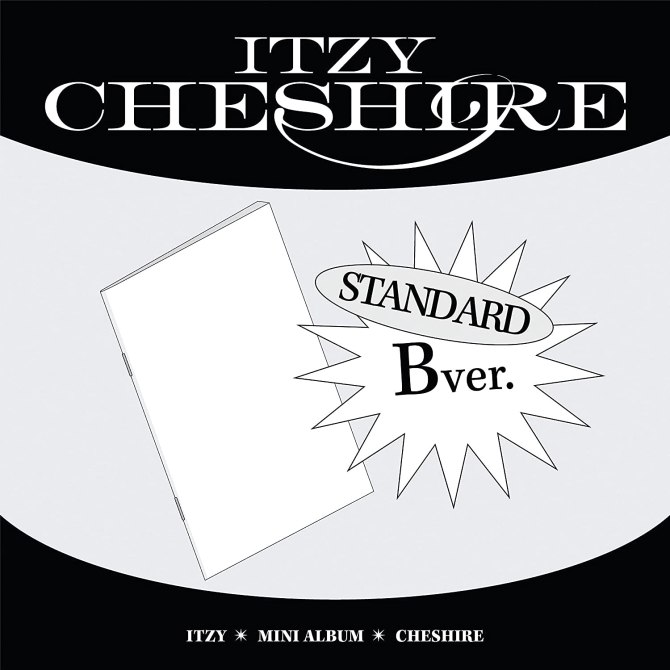