We hear wedding bells! American actress, writer, producer, director (the list goes on and on), Issa Rae may be engaged to longtime boyfriend Louis Diame, according to this clue. The Insecure creator announced on social media on Monday, March 25, that she was the cover of Essence’s April beauty issue. The cover star offered a lot of advice throughout her interview, but what fans can’t stop talking about? The diamond ring on her left hand, fourth finger, that looks a lot like an engagement ring.

In a simple and classy white ensemble, Rae radiated in the photo as she leaned against a wall. Her white turban matches everything down to her white wedged sandals. The look is stark, save for two pieces of jewelry. Rae wears beautiful gold dangling earrings and a ring that must be an engagement ring, right? (She’s wearing one ring and chooses her engagement ring finger—that can’t be a coincidence, right? With so many staffers on set to make sure Rae looks perfect, we’d be surprised if anyone let this glaring message slip accidentally.)

Well, as you might expect, this photo has ignited plenty of Twitter speculation, causing fans to wonder if the Little actress is, in fact, engaged. Some fans have already begun to congratulate the actress (who has yet to comment or respond to the rumors).

In her Instagram post, Rae wrote a heartfelt note about how much this shoot meant to her. “Four years ago, when all I had was a web series and a book, @Essence put me on my first cover with four incredible women I look up to: Ava, Mara, Shonda and Ms. Debbie. It was their “Game Changers” issue and I kept thinking, “I can’t believe they chose me.” That cover meant so much to me because it validated my work on a platform I respected AND it was a nurturing recognition of promise, a promise that I didn’t necessarily see in myself at the time. Four years later — entering the fourth season of my TV show, and shooting my fourth movie in New York — they honored me with this solo cover. Thank you, Essence, for helping me to deliver on that promise you saw years ago, and changing the game for me. 📸”

Just 13 hours ago, Rae also posted two videos to her story thanking everyone involved. And, she again is wearing the ring! It looks a bit less like an engagement ring (with how it slides up her finger like that)…but we aren’t ruling out engagement yet. A single ring on your entire hand on that finger must mean something. 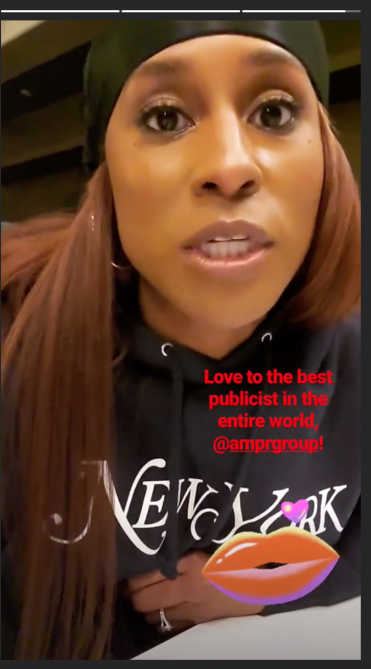 According to The Root, Rae has feuled engagement rumors to Diame before, though none of the reports have been confirmed.

We also want to point out that this isn’t the first time Rae has worn a ring on the special fourth finger. In fact, she seems to prefer that hand and finger to any other.

At the Emmy awards back in September 2018, the actress wore a stunning blue gown paired with a thick silver band on her left hand. The ring noticeably doesn’t have a diamond like the one from her Essence photoshoot, but it does give us pause, making us wondering if it means anything. 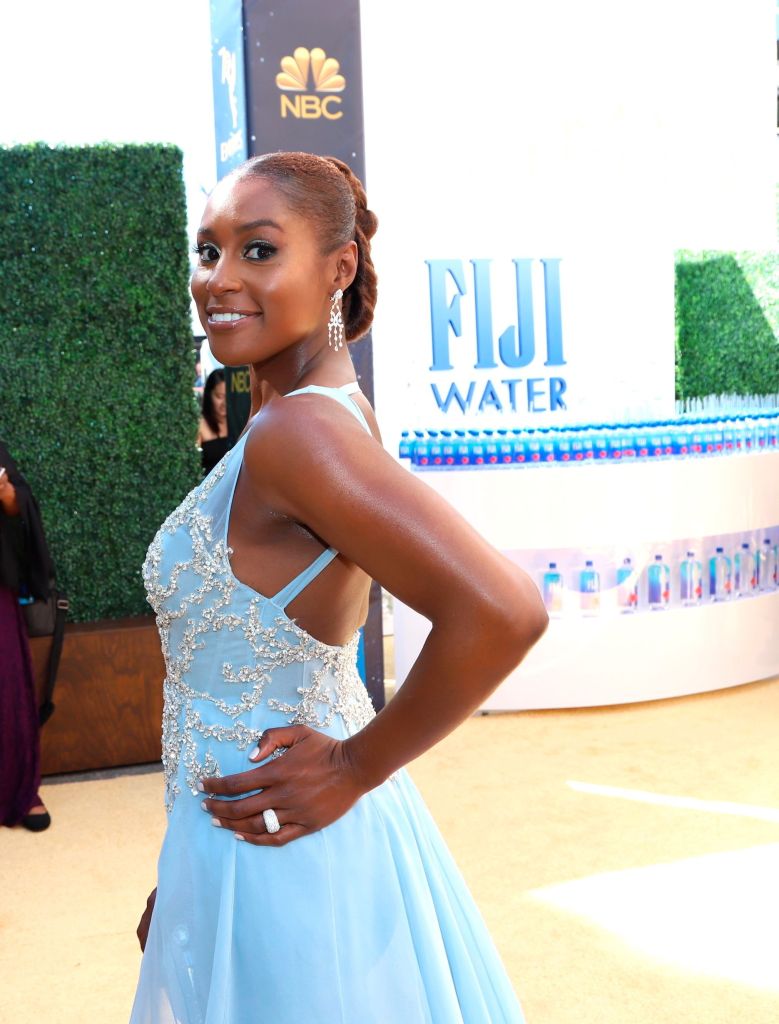 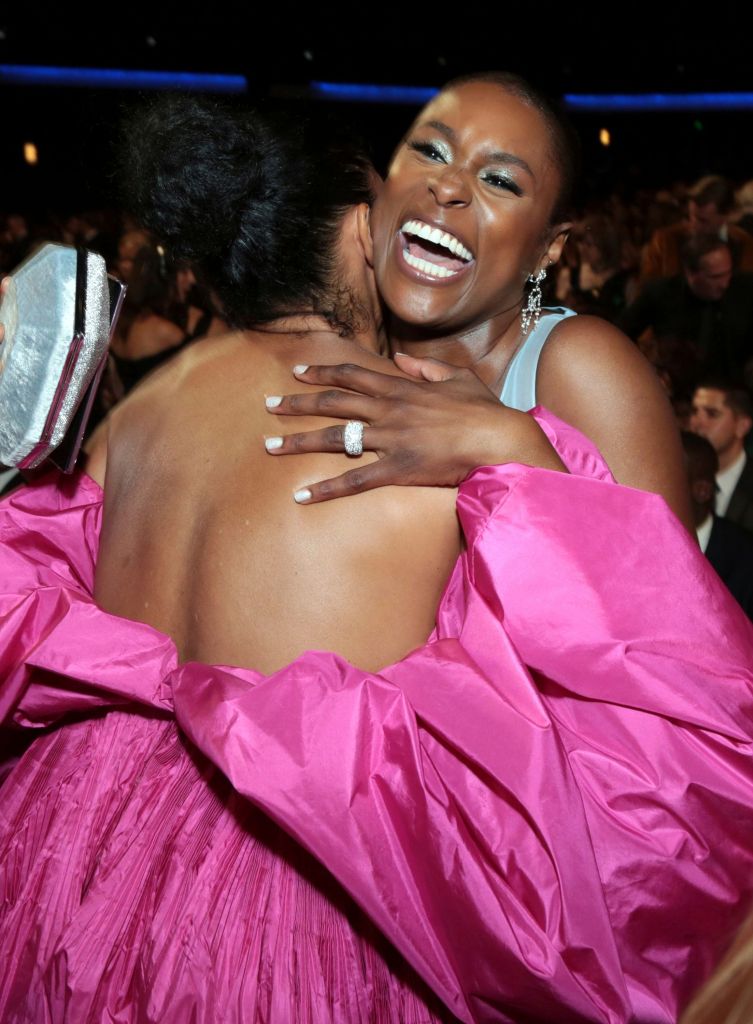 A month later at the State of the Entertainment Industry Conference in Los Angeles, Rae took the stage and, again—she has a ring on that finger! Only this time, it looks like three little bands, almost undetectable. 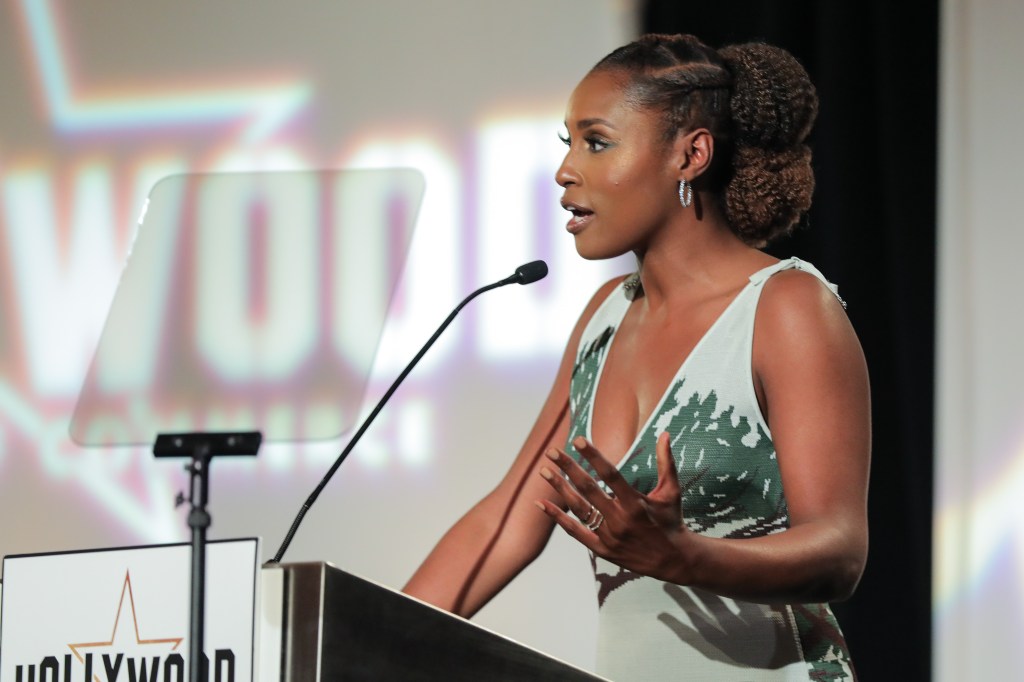 We guess only time will tell whether the actress, director, producer, world-runner is actually ready to settle down! She tends to want to keep a low profile on the dating front. In fact, in April of last year Rae told Marie Claire that she’s gets “so much feedback about everything,” so “the one thing I don’t need feedback on is who I’m sleeping with.”

While you wait for more details on her love life, check out the trailer for her new film, Little. It’s like Tom Hanks’ Big but uh… reversed! Obviously. In theaters April 12.