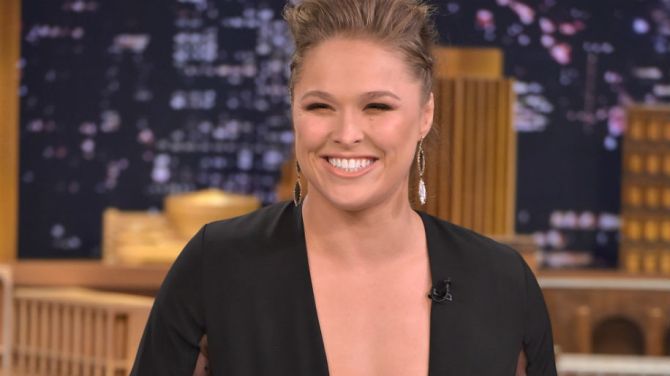 UPDATE: It’s official! After teasing it, Sports Illustrated has confirmed that its Swimsuit cover model is none other than UFC fighter Ronda Rousey, who will appear in the issue wearing nothing but body paint. Yowza! In the snap below, Roussey is rocking We Are Handsome’s “The Fighter” one piece, and (obviously) looks amazing.

It's official! @RondaRousey will wear NOTHING BUT BODY PAINT for #SISwim2016. https://t.co/B08z7Ameh0 pic.twitter.com/fZ6lzYvr6F

The Internet sure seems to think so, after an Instagram pic was posted by Sports Illustrated editor MJ Day, who’s responsible for making the Swimsuit Issue a reality. The snap features a toned derriere and some serious body paint, although you can also see the athletic build of the subject and blonde hair.

#instabooty if #2016 keeps going like this then I'm going to be one happy happy girl! #bootypaint #siswimsuit

If so, the mag will be right on trend: Body positivity is having a major moment, something we saw clearly with Annie Leibowitz‘s portraits for this year’s Pirelli calendar which featured strong, successful women rather than naked models.

It won’t be the first time that the publication has capitalized on larger social trends, either. Last year, it had its models pose backward as a nod to the hyper-focus on posteriors during the unofficial “year of the butt.”

Here’s hoping Rousey lands this year’s cover—as much as we love a toned model, we also love a strong, sexy athlete.