It was an astounding feat when Inside Out debuted in theaters four years ago. It was almost as if someone realized that kids were people too. When we think of children’s movies–the ’80s and ’90s were full of classics. It was the era that gave us The Lion King, Oliver and Company, Beauty & the Beast, and The Great Mouse Detective, among others. However, despite the legendary soundtracks and the way our hearts shattered after Mufasa’s death–children’s movies of the 20th century were still very much centered around giving generic life lessons or pushing the narrative that girls needed to be rescued by boys. Luckily, society has gotten some sense knocked into it, and these days we’re getting much more nuanced stories like Brave, Zootopia, and The Incredibles. However, Inside Out truly pushed the envelope when it comes to kiddy flicks.

The movie followed 11-year old Riley whose life is uprooted when her father gets a new job, and she and her parents move from Minnesota to San Francisco. Change is difficult for anyone, but for adolescents and teens, in particular, they can be exceptionally challenging. Instead of just analyzing Riley’s brain on a surface level, the movie does a deep dive into her psyche where we meet the five emotions, Joy, Sadness, Anger, Fear, and Disgust.

It’s these emotions that rule Riley’s world–but what Disney does that’s so profound, which is why the movie resonates well across generations, is that there is actual psychology behind the storytelling. Even as an adult, it can be challenging to sort through your feelings, and it can be particularly jarring when you realize that you’re feeling more than one emotion at once. Thankfully, Disney and Pixar decided to give us the perfect visual of what this might look like if our feelings were human-like figures running rampant in our brains. 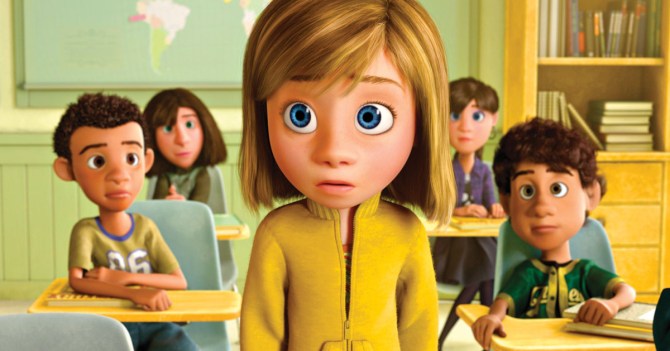 Joy, Sadness, Anger, Fear, and Disgust anchor the control room in Riley’s head. At nearly every turn, the emotions are fighting for control as Riley finds herself in various situations. What’s interesting is that though one emotion may dominate the others–it’s still in proximity to the other four feelings which means they can all affect each other. Though they stand at the center, Inside Out extends beyond the five emotions, there are also Riley’s memories, a Train of Thought, Imagination Land and Abstract Thought. The movie was cleverly crafted–so much so that children were able to grasp the concepts on a fundamental level with adults understanding more elevated ideas.

In the movie, Riley is never given the label of depression, though it’s clear that she is. Instead of her parents telling her to snap out of it, or giving her some condescending quip like, “You’ll get over it,” Riley is allowed to seep into her emotions and feel bad about her circumstances until she is ready to confront her fears, loneliness, and heartache. That’s what made Inside Out was groundbreaking. Instead of splashing the movie with Disney magic, writers Meg LeFauve and Josh Cooley studied actual human behavior to anchor their story.

Unlike the generations that have come before us, millennials seem to be more mindful of self-care and the advantages of therapy. However, this is something we had to figure out on our own. We’re a generation that continued to advocate for mental health. However, with major entertainment powerhouses like Disney and Pixar leading the charge, it opens the dialogue even further. Inside Out is a kids movie that millennials desperately needed 20 years ago, but we’re so pleased that the generations following us will continue to get projects like this that will foster a more in-depth understanding to who we are as human beings.