Thanks to Insecure, there’s a new red flag to look out for on a first date—and it involves being left in the middle of dinner by said date because they need to attend the birth of their newborn child in another city.

In Season 5 of Issa Rae’s HBO Max series, viewers got an inside look at one such moment vis-à-vis Lawrence Walker’s (Jay Ellis) life as a new father to his baby boy. Now, spoiler alert. By the time Lawrence lands in L.A. from his date in his new home base of San Francisco, his baby’s mother and ex-girlfriend, Condola Hayes (Christina Elmore) has already chosen their child’s name: Elijah Mustafa.

This scene sets the precedent for what is to come of Lawrence and Condola’s co-parenting relationship. In just the first few weeks of baby Elijah’s life, Condola is seen up all night trying to rock him to sleep, while Lawrence is popping bottles with coworkers and stumbling home late with his dates in San Francisco. In other words: Lawrence did Condola dirty. At first glance, it may seem that their relationship is just another stereotypical tale of single caretaking mothers and absent fathers that have pervaded the Black community in the media for decades. But a closer look at Lawrence and Condola’s co-parenting relationship shows them both wanting to be good parents, yet being unable to when they’re completely at odds with each other.

After all, Insecure Season 4’s finale showed Condola determined to be a mother with or without Lawrence’s help. And while Lawrence did not hold back when he confessed to Condola that she “ruined his life” by making the choice to keep their baby without consulting with him, he later takes issue with being left out of Elijah’s major life decisions. What’s clear from these moments—and the Twitter debates they’ve stirred amongst viewers—is that the former couple struggles to put their contempt towards each other aside long enough to adequately plan for their child’s future.

As new parents, communication is paramount; and in a world of video and phone calls, texts and social media, you’d think it’d come easily. That is definitely not the case for Lawrence and Condola. Instead, their “parenting plan” takes the form of short, untimely texts exchanges, like this one Lawrence sent to Condola: “I land at 8 tomorrow. Still cool for me to take Jah overnight?” (A simple call couldn’t suffice, Lawrence?!) Even Jay Ellis is at odds with his character’s behavior. The actor told Entertainment Weekly, “Wanting to be a good dad is not being a good dad. Wanting to be a good co-parent is not being a co-parent. You have to do.”

Everyone seems to be co-parenting these days, but what exactly does it mean? Some say it’s the latest trend where complete strangers choose to share a child together while having no history together as a couple. Others say it’s a post-divorce parenting arrangement. Gen Z would probably point to celebrities like Kehlani, Kylie Jenner and Slick Woods who all have been publicly open about being co-parents to their children.

Co-parenting can also describe a relationship between two unmarried exes who share a child, as in Lawrence and Condola’s case. At the end of the day, all co-parenting relationships seek to prioritize the child first. But Insecure has shown us that poor planning and communication, and larger implications like misogyny, toxic masculinity and hyper-independence can get in the way of putting kids first in such a relationship.

These factors aren’t just limited to Lawrence. Although fans of Insecure were quick to point out his wrongdoings, Condola isn’t spared from critique either. Viewers took notice of how resistant she was when it came to including Lawrence in her plans for baby Elijah’s upbringing. In one instance, Condola swept Elijah out of Lawrence’s arms moments after he landed in L.A. to care for him overnight. “I don’t trust you,” she told him. After seeing his bachelor-lifestyle montage, it’s easy for viewers to understand why she might say this—but in doing so, Condola also shuts down the possibility for any relationship to form between Lawrence and their child. She feels safer in her choice to be a single mother, ultimately in an effort to protect herself and Elijah from any further heartbreak. 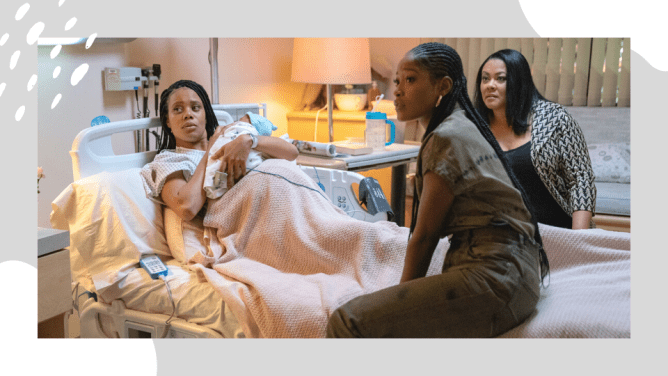 Lawrence and Condola’s relationship may be a fictional one, but it hits home for many viewers who may be in, or, are contemplating being in co-parenting relationships themselves. This was exactly the intention coming from the writer’s room. Ellis told EW, “If it causes an argument in the room or someone’s emotions get messed with in the room in some way and they get triggered, it has to go in the script, because that means it’s going to happen for a viewer as well.”

It can be seen as a good sign, then, that no Insecure fan wants to be in Lawrence and Condola’s relationship as it stands. Millennials and Gen Z want equitable partnerships where their child can thrive among loving—or at least, agreeable—parents.

Insecure is available to stream on HBO and HBO Max.