I didn’t want a wedding. I’m not saying that to be cool or to prove how not-basic I am, but I’d never been one to dream about bigger-than-yours diamonds, strapless white gowns, and a stable of girlfriends in matching dresses. In fact, I wasn’t sure I was even sold on the idea of marriage at all. I wasn’t steadfastly opposed, but I would have been more than happy to remain in a committed relationship with my boyfriend, Adam, and not do the wedding thing. However, when he proposed in 2011, I said yes because I loved him and because I knew how important it was to him to make it official. I said hell no, though, to a traditional wedding and all its trappings.

I won’t bore you with the drama that ensued—basically, my no-wedding plan was overruled, as was my plea for a teeny-tiny dinner. I wasn’t thrilled, but—as a logical adult—I understood that our families and my husband-to-be wanted to celebrate in a bigger way than 20 people sitting around a restaurant. And, frankly, I didn’t care enough to control the whole thing. But guess what I could control? What I wore to the celebration. But instead of focusing all my energy on the dress, I did the opposite: Didn’t give a fuck and kept telling everyone who asked “I’m sure I’ll find something!” 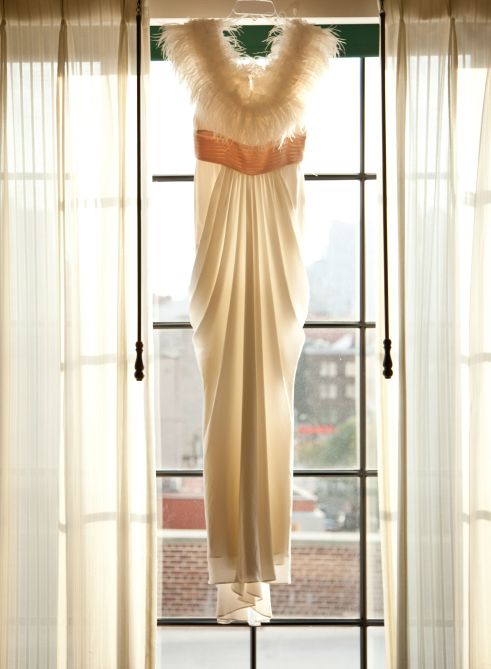 I flat-out refused with a capital R to step foot in a single wedding salon, no matter how “cool” or “indie” or “chill” it fancied itself. I knew for a fact I didn’t want to wear a dress designed specifically for a wedding, nor did I want to deal with salespeople who no doubt wouldn’t be amused by my blasé attitude and my unwillingness to say yes to any dress.

Plus, I was—logically, I thought—opposed to spending a ton of money on a garment I’d wear once. To each their own, but I wanted to treat what I wore less like a magical, princess-for-day experience, and more like an outfit that looked good on me for what’s sure to be a fabulous but five-hour night. That’s shorter than a work day, to put it in perspective.

My abject noncompliance placed me in a tough spot. I knew I needed to show up in something decent, but had absolutely no interest in bopping around to stores—even stores I liked—looking for it.

Since I had no interest in hunting, I decided I’d buy some fabric and find an inexpensive seamstress to stitch me up the style I was starting to envision: a super-silky, long-sleeve wrap dress. Something that would look great but also effortless at New York’s Bowery Hotel on a Saturday night in August. Yes, I’m aware now this classifies as having a dress made, which is just as annoying as shopping for one.

When I decided that was the plan, I asked an emerging designer whom I’d interviewed a year before and become sort of friendly with to suggest a local seamstress or tailor he particularly liked.  That’s where things kind of fell apart: The designer told me he’d like to create the dress himself. This was a problem for a few reasons.

One, he told me he was eventually planning to launch bridal in addition to ready-to-wear, and wanted to test the waters. I didn’t feel comfortable being a guinea pig because I didn’t want a “wedding dress” and felt he wouldn’t want to lend his name to the simplicity I envisioned. Two, I didn’t want to make the process a thing but felt I couldn’t say no, and thought it might be the easiest and chicest route in the long run. Showing at New York Fashion Week had to count for something, right? 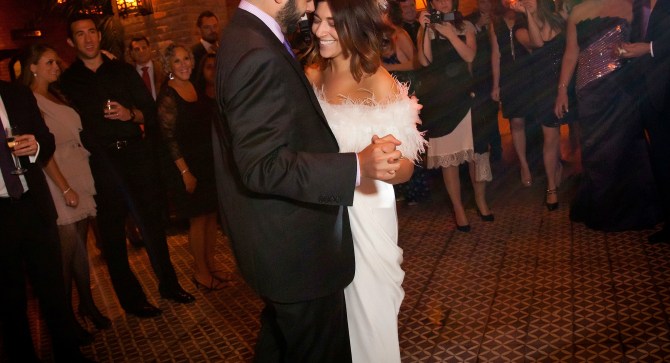 The details that followed don’t need to be recounted in full, but I will say the dress was a hot mess, and for that we were both at fault. I wasn’t nearly as assertive as I should have been. I nodded and shrugged at the sketches, assumed the result would be better than the first two versions I saw, and tried on a third draft that was so uncharacteristically low-cut and massively unflattering that I started tearing up when I looked in the mirror. But I still didn’t demand we start from scratch.

After leaving his studio—more depressed about the way I perceived my body in the dress than the fact my wedding was in 12 days—I called the designer up and told him it wasn’t working for me, and I’d be happy to pay for the fabric but I no longer wanted the dress. He wasn’t thrilled—not that I blame him.

It was around this time that a little bit of panic kicked in, but I was still convinced I’d find something, somewhere. I spent a particularly stressful 48 hours flicking through dresses at Barneys, Saks, Derek Lam, J.Crew, Phillip Lim, and about 100 other stores on Fifth Avenue and in SoHo, also overnighting a random assortment of dresses from Net-A-Porter and Shopbop. Nothing.

Then, nine days before the wedding, I casually mentioned to my mom that I had a 30 percent press discount card to Lord & Taylor, a store we had nothing against, but never really shopped in. When she suggested we check it out because time, I agreed. We weren’t in the evening department more than 15 minutes when we saw a silky floor-length white dress with a pale-pink sash and a glitzy feather off-the-shoulder top. It was fun, a little kooky, and looked like something I’d wear anyway.

MORE: Why I Did My Own Makeup for My Wedding

When I tried it on, it fit like a glove, save for an extra few inches at the bottom. Turns out, it was past-season BCBG, and it was on sale for just under $300. Done.

We took the dress up to the register, both psyched. Me because this nonsense was over, her because she didn’t have to deal with my aversion to everything bridal anymore.

“$66.80,” the cashier said. My mom and I glanced at each other, confused. Turns out the dress wasn’t only on sale, it was on clearance and my press discount applied, making the grand total less than the cabs we’d taken that day.

Now for the irony: The wedding ended up getting canceled the day-of—thanks, Hurricane Irene!—and rebooked for two months later. Other girls would have used that extra time to go back to the drawing board, but I was thrilled that I’d found something I really liked, even if it wasn’t a “dream dress” by definition, and all I had to do was throw it on and show up, which I did on October 15. 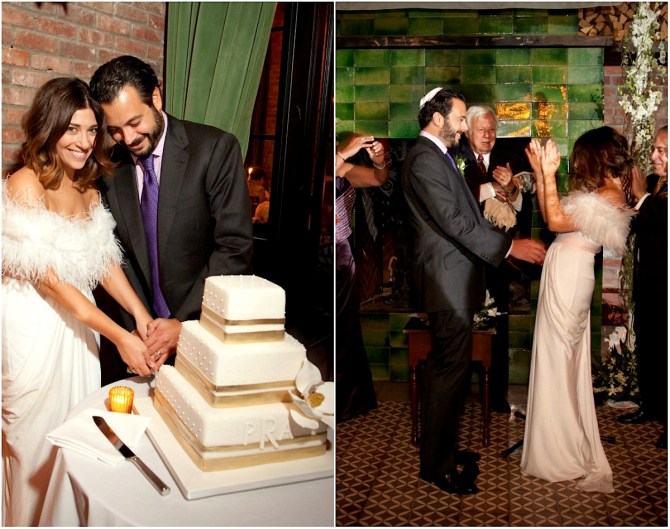 My dress was a hit, and once I had it on, I pretty much forgot it existed and was able to eat, drink, and dance as if I were out on any other night.

Do I gaze at photos and feel grateful that the dress managed to stand the test of time? Nope, but who cares? I’m not afraid to admit that my personal style changes frequently, and I don’t think women have to morph into Audrey Hepburn prototypes just because they’re brides. I loved it at the time and still do, for what it was.

Plus, after some googling, I learned Amy Poehler wore the same dress in a shoot for The Hollywood Reporter, so some stylist, somewhere approved.

I recently read that Oscar de la Renta proclaimed the wedding gown to be “the most important dress in the life of a woman,” but I respectfully have to disagree with the late, great designer. I prefer to look ahead when it comes to my clothes, and don’t consider my wedding dress any more important than the one I plan to wear out this Saturday night, and I’m perfectly fine with that.