Quitting a stable job as a Montessori kindergarten teacher to go full-time as a freelance illustrator is a move that takes some serious balls—although in the case of Ilse Valfré, perhaps “ovaries” would be more apt. I first came across the 29-year-old’s work on Instagram, as many of her fans do, and was quickly hooked on the drawings of wide-eyed girls with star-shaped freckles and cotton-candy hair, and the bomber jackets she designs for her namesake brand with cheeky slogans such as “Anti-Everything” and “Grow a Pair”—the latter below a heart-shaped illustration of the female reproductive system (hence that whole ovary thing).

Valré’s work expresses a particular mix of vulnerability and girl-power confidence: in one drawing, a tattooed babe leans against a pay phone and says, “I look hot today. You missed out.”; in another, a girl dives head-first into a set of drawers, asking, “Have you seen my dignity?” The dichotomy should be familiar to anyone who follows young, internet-native female artists, who have carved out a space online where fuck the patriarchy can peacefully co-exist with why didn’t he text me back? (think of the popularity of Twitter account @SoSadToday, or patches and pins declaring “Mixed Emotions Club” and “Whatever Forever”). Even within this space, Valfré’s designs stand out for their whimsy and wearability—there are iPhone cases, baby tees, day planners, and canvas pouches, featuring drawings and slogans that are by turns confrontational and unabashedly girly. 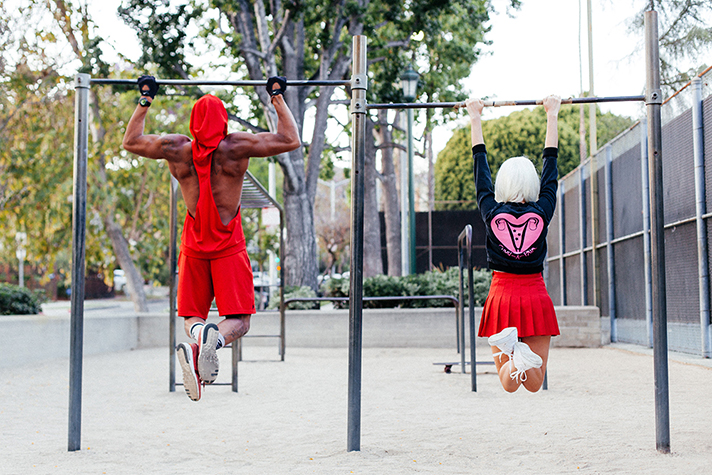 Now based in Los Angeles, Valfré was born and raised in Tijuana, Mexico, and from a young age she turned to drawing for comfort. “When I was in elementary school, I had some problems learning how to write and read, and I used to go to this lady after school,” she recalls. “She used to make me draw all the time, so it was kind of like a therapy session, and I fell in love with it.” Her signature characters also came out of a childhood obsession with Betty and Veronica from “Archie” comics—she developed a knack for drawing the female form after poring over the collection she shared with her sister.

MORE: 7 Brands That Support Women to Know and Shop

Initially, Valfré wanted to go to fashion school abroad after graduation, but ended up teaching at a Montessori school closer to home at the encouragement of her mother. Craving more freedom and the ability to travel, however, she looked for a job that would let her freelance. “I didn’t even know what to do, and then my sister said ‘You should be an illustrator!’ and I was like, ‘Oh, is that a thing?'” she says. “I literally Googled it and it was like ‘Oh, yeah.’ So I quit my job, I moved back in with my parents, and I opened up my website with $200. I thought it would be super easy, but I was so naïve.” Instead, she was cold-emailing companies with her work, trying to secure an agent, and getting mostly frustration in return.

Finally, she decided she had to do it her own way: she joined Tumblr in February 2011 and started blogging her illustrations, gradually building a loyal community of followers. It took time—she didn’t launch her brand until late 2013—but by the time she did, not only were fans reblogging her work, they were also having it tattooed on their bodies, and sending her photos of it printed on T-shirts and stickers in China. What started as a one-woman operation has since grown to a team of 15, with Valfré acting as the lead designer and her husband heading up the business side of the company. The brand is expanding into new categories season by season, and Valfré is now in talks to do an animated television show, which she describes as “‘Adventure Time’ meets ‘Sex and the City’ meets ‘Girls’.” 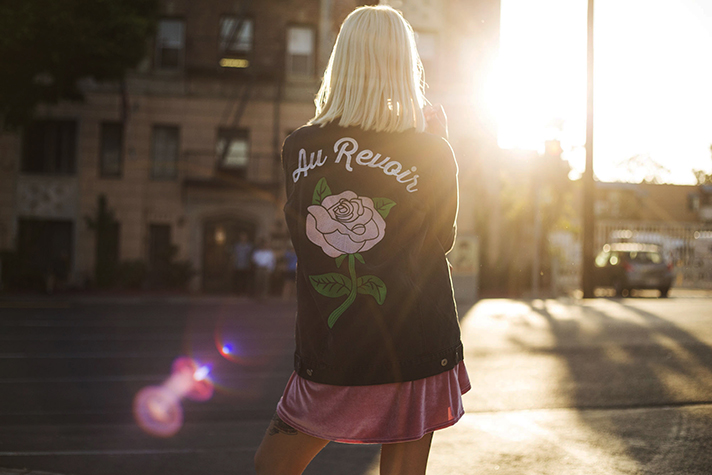 The news that they had secured the investment needed to launch the brand came just four days before another major announcement: she was pregnant with her first child. “I was really scared,” she admits. “I was only 25, and it was not in my plans. But that’s the cool thing about women—we can really adapt to anything. I think that’s the beauty of it: if we want to adapt to something, we can.” And adapt she did, first with her now-three-year-old daughter, and again this year with her second baby. “It’s kind of surreal because I come and we talk fashion all day, and then I go home and I need to change diapers—or I have my new fancy shirt and then my daughter cleans her snot all over it,” she laughs. “But it’s fun, I love it.”

MORE: This Badass Model Is Fighting Sexism in Such a Smart Way

“My life changed completely. But it’s for the better—I was so self-centered back then … I love being a mom. I think it grounded my mind to focus on what’s really important,” she says. As playful as her work is, it also touches on subjects with real consequences—especially given today’s political climate—including feminism, identity, and gender. The “Grow a Pair” jacket, for instance, prompted a slew of comments on social media accusing the brand of being transphobic—which she instructed her marketing team to leave up to encourage open dialogue.

From her perspective, she says, the message wasn’t meant to alienate anyone: “I think don’t think having ovaries makes you a woman. Like my mother for example, she doesn’t have ovaries; since she had me, she’s had to get them removed, but that doesn’t make her less of a woman because of that, you know?” she says. “I have a trans friend, and she’s a female, and she wasn’t born with female parts. But that doesn’t make her less of a woman than I am.” In other words, balls and ovaries are beside the point; it’s what they represent (courage, tenacity, a rebellious spirit) that really defines the Valfré girl.

No Vacancy Bomber Jacket, $98; at Valfré