Those aware of the increase in guardian abuse cases across the United States know that Netflix‘s I Care A Lot is based on a true story about the thousands of senior citizens who are scammed out of their life savings by people like Marla Grayson.

(Spoilers ahead.) I Care A Lot, which premiered on Netflix on Friday, February 19, follows a con woman named Marla Grayson (Rosamund Pike), who makes a living by persuading a judge to appoint her as a guardian to elders living on their own under the guise they cannot take care of themselves. Marla has the help of a doctor, who informs her about the wealthy elder patients she can exploit. The doctor then testifies in court about how these elders cannot take care of themselves, which convinces the judge to appoint Marla as their guardian.

After that, Marla moves the elders into an assisted living facility, takes away their cell phone, cuts off their contact to their family and the outside world, and sells their home and assets for her own profit. In the end, Marla makes billions off of her business but is shot to death by the son of an elder she conned who died before her family could see her one last time.

So how real is I Care A Lot and can that actually happen to elderly people? Well, according to the film’s director, J Blakeson, it happens more often than people know. “In Marla’s approach, a lot of it happens unfortunately. It’s true to life in the fact that there are lots of these predatory guardians who do pray on vulnerable and elderly people, and sort of entrap them in these guardianships and basically sort of strip their life apart,” he told Collider in February 2021. “The true life stories of it are really quite harrowing and horrifying so unfortunately, yeah, it does happen.”

Blakeson went on to explain the inspiration for Marla, which was a person who didn’t look like the usual con woman but was still a criminal behind the surface. “One thing we spoke about while we were making the film, I spoke to Rosamund about, you sort of get a sense of it, but it didn’t really make the final film, which is if you met Marla in real life, at say a party or something, you’d just think, ‘Well, she’s very attractive, very well put together, well dressed. She seems to have a great, caring relationship with her girlfriend. She’s got great taste. Her office is beautiful and she’s kind of smart. She seems [like] a really great person.’ And then you would ask her, ‘What do you do for a living?’” he said. “She goes, ‘Well, you know, I take care of elderly people.’ And you think, ‘This lady’s great! She’s a saint!’”

He continued, “But, you know, part of that thing of people looking to the world as if they’re good people who do good things, but actually there’s lots of bad things underneath the hood I think is something very true of that world and true of lots of different people in positions of authority who get away with a lot because people just trust them because, ‘Oh, they’re the guy that we know!’ So there’s that element that didn’t quite make it into the film, but I think is very true.”

Blakeson didn’t reveal if there was one person who inspired Marla’s character, but viewers have noted the similarities between Marla and a guardian named April Parks, who was sentenced to serve 16 to 40 years in prison and pay more than $500,000 in restitution in 2019. Parks was written about in the 2017 New Yorker article, “How the Elderly Lose Their Rights,” which was featured in a 2020 episode of Netflix’s Dirty Money.

The article focuses on Rudy and Rennie North, a retired Nevada couple who were married for 57 years before Parks arrived at their home in 2013 and forced them to move to an assisted living center. Parks, who had won control of hundreds of wards over the years, had filed an emergency petition to become the Norths’ guardian without their knowledge. As seen in I Care A Lot, the emergency petition allowed Parks to become the Norths’ guardian without them even appearing in court. To convince the judge, Parks presented a letter from a physician’s assistant who had one appointment with Rennie. The letter said that the couple could no longer take care of themselves.

After 10 minutes, Parks became the Norths’ permanent guardian, which allowed her to sell off their belongings, change their insurance and force them to see new doctors who prescribed them powerful tranquilizers and painkillers. The couple’s daughter, who didn’t know that her parents were sent to an assisted living center until she arrived at their house and saw that their home was empty, turned to journalists who investigated abuses in the guardianship system. 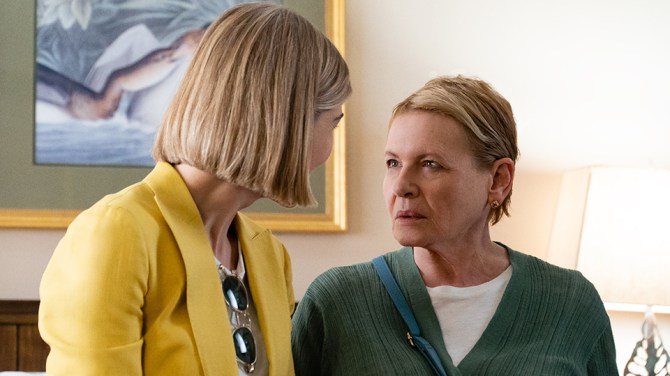 In the end, Parks, her husband, lawyer and office manager were all indicted for charges that included perjury and theft in 2017. The case revealed that Parks had worked with medical facilities and lawyers to find future clients and had told doctors what to write in their notes to the court to ensure that she was awarded guardianship. She pled guilty and is currently serving her sentence. “She was not a guardian to me,” one of Parks’ former wards told the Las Vegas Review Journal in 2017. “She did not protect me. As each day passed, I felt like I was in a grave, buried alive.”

The newspaper reported that nine people spoke at Parks’ hearing in 2017, including relatives of elders who had died under Parks’ care. One victim, Larry Braslow, told the judge that a decades-old family address book had disappeared while his mother, Ruth, was under Parks’ care. Braslow also told the judge that his father’s footlocker, which contained military uniforms and other accoutrements, had also disappeared once Parks took over the assets.

The court found that Parks was the guardian of 50 to 100 elders or mentally incapacitated people before she was arrested. She faced more than 200 felony counts. The newspaper also reported that Parks, who was shackled as her victims spoke in court, kept her head turned away from her victims during her hearing and kept her face that way.

I Care A Lot is available to stream on Netflix.