Since the beginning of time, women have had to use their ingenuity and wits to survive in a world that often wants to keep them pinned down. Based on the viral 2015 New York Magazine article, “The Hustlers at Score,” Lorene Scafaria’s Hustlers is a dazzling narrative. The film centers a group of women who decide to be active participants in their own lives. Instead of waiting for better circumstances to come to them– they choose to take what the need, and quite frankly what they deserve.

Hustlers opens in 2007–the year before the most devastating economic crash since the Great Depression. Wall Street was basking in its golden moment, and New York was the epicenter of it all. As Janet Jackson’s “Control” strums in the background, we meet Destiny (Constance Wu). A newcomer at one of the most exclusive strip clubs in the city–she hasn’t quite found her footing. She’s barely scraping by with enough money to help her ailing grandmother. The other girls have their regulars and their confidence–wooing clients into the backrooms and garnering thousands of dollars a night for their acts. However, Destiny still hasn’t quite learned how to “sell fantasy.” But there’s one woman who has.

Ramona (Jennifer Lopez) is the queen of the club. Vivacious, sexy as hell and enticing–she has learned how to work the club, and its men for well over a decade. When we first meet Ramona, swirling around a pole–she’s like a work of art. As thrilled as the club’s clientele is with her–Destiny is also dazzled. Looking for ways to advocate for herself–Destiny reaches out to Ramona who happily takes her under her wing (and into her mink fur). 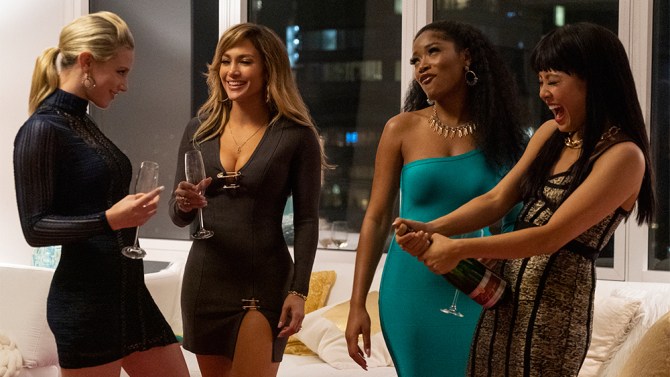 When the market folded on Sept. 29, 2008– millions of people lost everything, and there was certainly no room for frivolity. The crash and circumstances in her personal life force Destiny to take a step away from the club. She loses touch with Ramona as a result. However, in 2011, a single mother with little-to-no “traditional” work experience, she has no choice but to return to stripping. At her lowest point, Destiny looks up to find Ramona standing in the shadows–like her guardian angel.

The women bond once again–but this time it’s different. The world has changed, and so has the ecosystem of the club– which still hasn’t quite recovered from the crash. Desperate to keep food in their babies’ mouths and roofs over the head with a little extra–Destiny and Ramona concoct a lucrative plan to make their money work for them. They pull in Mercedes (KeKe Palmer), a Southern girl hopelessly in love with her jailbird fiancee, and Annabelle (Lili Reinhart), a younger girl who has been put out on the street by her family and vomits when she’s feeling any sort of emotion. Together, the foursome takes their clients for every penny that they’re worth.

The thing about money and wealth is that once you have it–it’s never enough. It’s a lesson that the women learn the hard way when things get very dark. However, what is so impactful about Hustlers is that their humanity flows generously throughout the narrative. The ladies aren’t always likable, and they certainly aren’t always right–but you never stop rooting for them. Scafaria’s lens is never gratuitous–it’s always heartfelt, honest and sometimes even a bit gritty as she takes the time to unpack these women and their pasts. Also, though we see music superstars Cardi B, Lizzo and another surprise cameo–their presence never takes us out of the story.

Captivating, hilarious and intriguing, Hustlers is an enticing display of sisterhood, feminism, and tenacity. Though all of the women are wonderful to watch–it’d Lopez’s Ramona, and Wu’s Destiny–two women who become like sisters as a result of their circumstances–that will keep your eyes glued to the screen. As we learn–and as journalist Jessica Pressler (Julia Styles) learns–this was never a story about “theft.” Instead. It’s one of female empowerment, motherhood and being able to stand on your own two feet when the world tries to knock you down.

Hustler debuted Sept. 7 at the Toronto International Film Festival. The film will arrive in theaters Sept. 13, 2019.