Ever since making her acting debut in Netflix’s Squid Game, fans have been wanting to know HoYeon Jung‘s net worth today. The South Korean star captivated audiences as pickpocket Kang Sae-byeok, a.k.a. Competitor 067, in the series—but in real life, HoYeon Jung’s net worth is more than enough to avoid a sneaky money-grab.

HoYeon Jung, who is originally from Seoul, was born on June 23, 1994. Before she landed the role on Netflix’s Squid Game, Jung kicked off a career in modeling at the age of 16. She got her start by freelancing and walking in Seoul Fashion Week shows before eventually competing in Korea’s Next Top Model in 2013, where she came in second place. Following her success on the series, Jung was signed to one of South Korea’s top modeling agencies, ESteem Models, and later to a New York agency, The Society Management. Jung’s modeling career took her overseas in 2016, as she went on to walk in shows at New York and Paris Fashion Week for brands like Marc Jacobs, Alberta Ferretti, Louis Vuitton, Fendi and more.

While Jung has certainly established herself in the modeling industry, it was her appearance in 2021’s Squid Game that has catapulted her to super-stardom. For everything we know about how much her Squid Game salary—along with HoYeon Jung’s net worth overall—just keep on reading below. 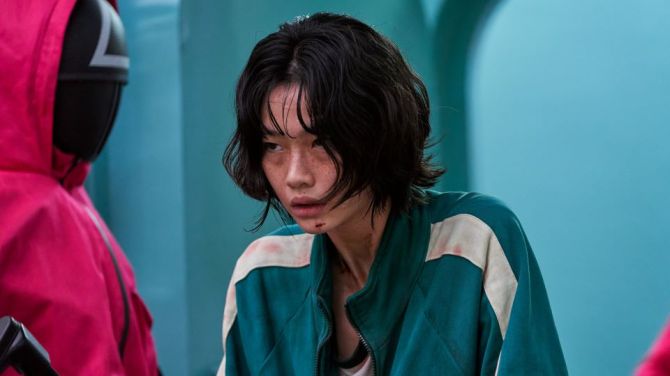 The actress opened up about all that her character meant to her in an interview with Vogue following the release of Squid Game, telling the publication that playing Sae-byeok “changed” her for the better. “The biggest lesson that Sae-byeok has taught me is that people are stronger when they live for others and with others, rather than chasing after their individual interest,” Jung explained. “That’s the biggest personal change that I went through. In my modeling days, I never faced situations where I had to really think about others, or my family and friends. I didn’t have a sense of responsibility; it was more about my well-being and goals.”

“What was difficult about portraying Sae-byeok is that she’s a character who is willing to give her life for her family,” Jung continued. “I had to ask myself, Would I be able to do that if I were in her shoes? The closer I got to Sae-byeok, the more I understood that this is what made her so strong, and it’s changed me for the better.”

Of course, Jung’s perspective on life isn’t the only positive change to come from starring in Squid Game. HoYeon Jung’s net worth saw a boost thanks to her salary in the series, which is estimated to have been around a “few hundred thousand Taiwan dollars” per episode, according to Today Online, which is roughly equivalent to several thousand US dollars.

Before Squid Game was released in September 2021, HoYeon Jung had just under half a million followers on Instagram. Within days of the show’s premiere, Jung’s follower count began to skyrocket, surpassing over 19 million followers as of October 2021. This makes her one of the most followed Korean actresses on social media yet.

Naturally, the more followers a star has, the more opportunity they have for making money through sponsored posts and branding opportunities on the platform. CBD brand Area52 commissioned research from with Influencer Marketing Hub, which found that the lead actors from Squid Game are earning thousands per post. According to Vogue Business, Jung is the highest-paid Squid Game star on Instagram, earning up to a whopping $43,000 per sponsored post on the platform.

According to Sportskeeda, HoYeon Jung’s net worth is an estimated $4 million as of 2021. Given her success on Squid Game and the show’s mounting popularity in the months to come, it’s only a matter of time before Jung’s net worth gets even bigger.