Some of the big trends this season aren’t necessarily what we’d describe as feminine—it can be hard to look girly when you’re swallowed up in an oversize coat or wearing a graphic sweatshirt—but there’s at least one that allows you to show off your more ladylike side and remain as stylish as the rest of the bunch: the full skirt.

MORE: 8 Ways To Dress Up Denim This Fall

As is true with many things in fashion, this look is actually a reemergence of a silhouette that gained popularity in the 1940s and ’50s. Counter to the increasingly popular slant toward nakedness in pop culture, this type of skirt derives much of its appeal from being more modest than anything else—the point isn’t to flaunt what you got, but to tease what you might have.

MORE: How to Tie a Scarf: 4 Chic Ways to Wear The Fall Essential

Below, find seven modern ways to rock the ultra-feminine full skirt this fall! 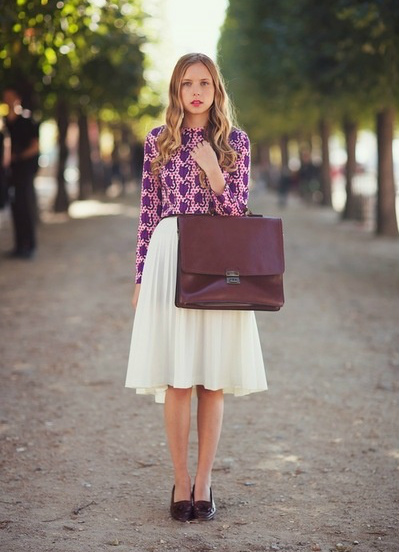 Whether you prefer your pattern in your blouse or in your skirt, stick to one solid and one print. Either way, the skirt will be the central focus—there won’t be competing prints battling to draw the attention of the eye, and its bouncy shape becomes the main event. 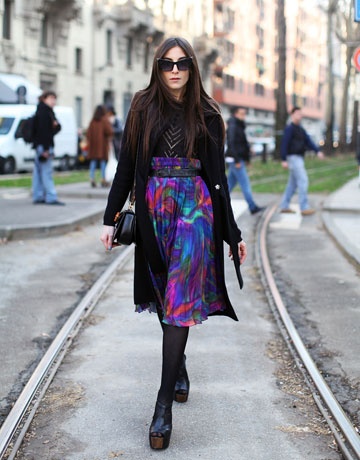 Photo via The Fashion Edit

The only danger inherent in wearing a fuller skirt is that the added volume has the potential to swallow your figure and have the opposite of the desired, ultra-feminine result. There’s an easy solution: put a belt on it. Cinch it in at your waist, and allow some of the fabric from the top of the skirt to poke through over the top of the belt. You’ll instantly have your curves back, and you’ll look slimmer at that. 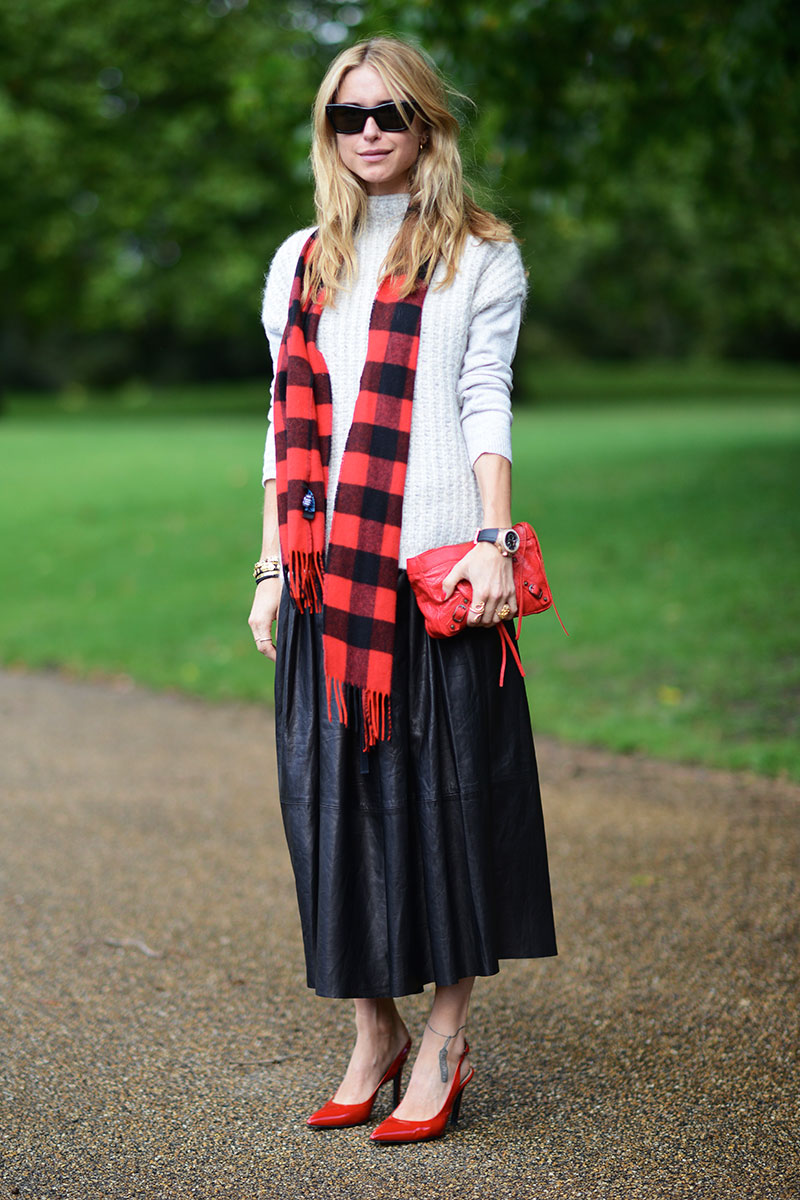 If you’re going for a more boho-chic approach to the look, and you’re not afraid of a little bit of slouch, throw on a longer top or tucked-out sweater—think more Mary-Kate and Ashley Olsen, and
less Olivia Palermo. 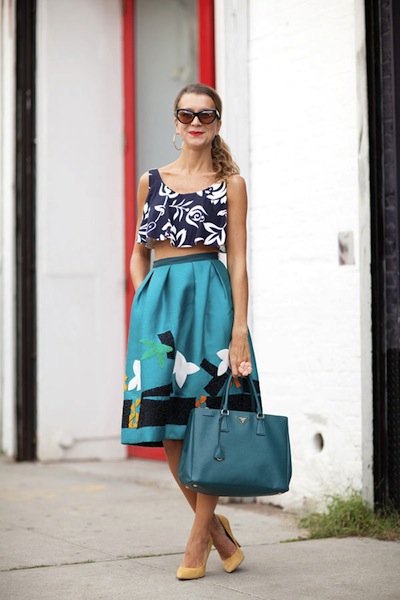 Stylist and street style star Natalie Joos perfected the full skirt-crop top look at September’s New York Fashion Week. Short tops were practically made to wear with a high-waisted full skirts, which bares just a hint of skin. Plus, it slims you on top, while the skirt adds volume at your hips resulting in a waist that looks teeny. This can even work during the fall: Instead of a cropped tank, go for a chic cropped turtleneck sweater. Trés Parisian! 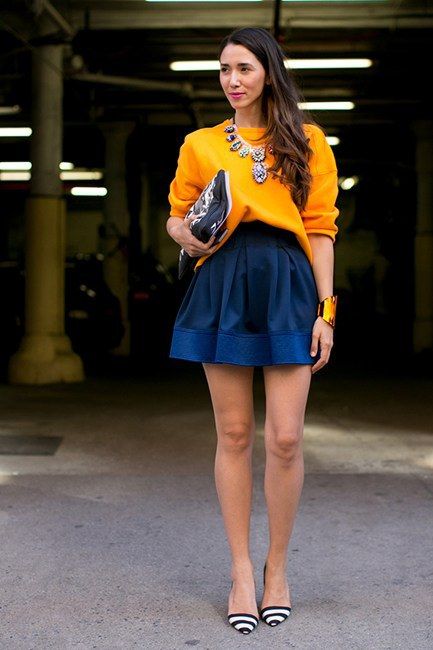 5. Go shorter for a flirty silhouette.

Full skirts aren’t limited to versions that hit the knee or below–a short skirt can also be considered full. These tend to emphasize your hips even more, and the flash of thigh in addition to calf makes the look that much more feminine. For the cooler months, throw on a pair of tights under your short full skirt, and you’re all set. 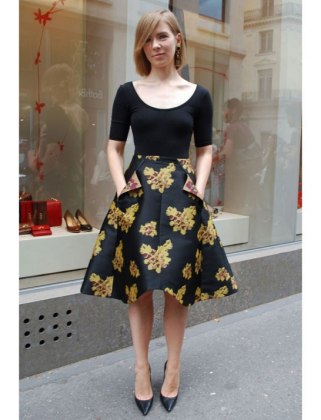 A full skirt not only adds volume and a delightful swish factor to your outfit: it also means there’s more room for pockets. Pockets are utilitarian, of course, providing room for you to haul your everyday necessities but they also add a modern, almost casual touch—one that makes for a fun contrast to the super-girly shape the skirt. 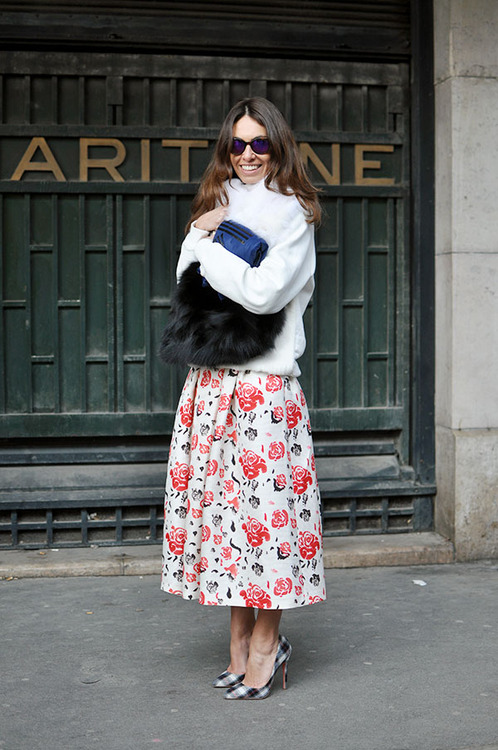 Photo via People With Styles

To take the full skirt to the ultimate depths of femininity, we suggest picking one up that’s printed with flowers. You can keep the femme vibe going by adding a silky blouse and dainty pumps, or toughen it up with a cropped leather moto jacket and a a pair of cool ankle boots.