If you’re a fan of the Dark Knight, you may want to know how to watch The Batman online for free now that the movie is available to stream.

The Batman is a reboot of the Batman film franchise, which has starred Adam West, Michael Keaton, Val Kilmer, George Clooney, Christian Bale, Ben Affleck and more actors as the caped crusader. The Batman, which stars Robert Pattinson as Bruce Wayne (a.k.a. Batman), is based on the DC Comics superhero of the same name, who first debuted in 1939. The Batman comics follow Bruce, a wealthy playboy from Gotham City who fights crime as the superhero Batman after he witnesses the murder of his parents, Thomas and Martha, as a child. Pattinson is the 12th actor to play Batman in a major movie and the second actor to take on the role after Ben Affleck—who played Batman in the DC Extended Universe’s Batman v Superman: Dawn of Justice, Suicide Squad, Justice League and The Flash—retired as the superhero. (Affleck will make his last appearance as Batman in 2022’s The Flash.) In an interview with The New York Times in 2020, Affleck revealed that his negative experience while filming 2017’s Justice League led to his decision to part ways with the DC Comics character and not film a solo Batman movie. “I showed somebody The Batman script,” Affleck said at the time. “They said, ‘I think the script is good. I also think you’ll drink yourself to death if you go through what you just went through again.’”

In an interview with Nerdist in 2020, director Matt Reeves explained how his version of Batman, who is in his 30s and younger than previous Batmans, is different than past movies about the character. “I just felt like well, what I’d love to do is to get a version of this Batman character where he’s not yet fully formed. Where there’s something to do in this context with who that guy would be in this world today, and to ground him in all of these broken ways. Because at the end of the day, this guy is doing all of this to deal with trauma in his past,” he said. Producer Dylan Clark also confirmed to Empire in 2021 that Pattinson’s Batman is separate from the DC Extended Universe, which includes heroes like Wonder Woman, Superman, Aquaman and the Flash. “Warner Bros. has a multiverse where they’re exploring different ways to use the character … We don’t get involved in that. Matt is interested in pushing this character to his emotional depths and shaking him to his core,” he said.

Instead, Pattinson’s Batman is meant to launch a new Batman universe, with multiple spinoff movies and series on HBO Max. Among the spinoffs is an HBO Max series based on the Batman supervillain Penguin, played by Collin Farrell, who will make his first appearance as the character in The Batman. A Batgirl movie starring Leslie Grace as the superhero is also set to premiere on HBO Max, though the film isn’t expected to exist in the same universe as Pattinson’s Batman as Michael Keaton (who played the character in 1989’s Batman and 1992’s Batman Returns) has been cast as the hero. 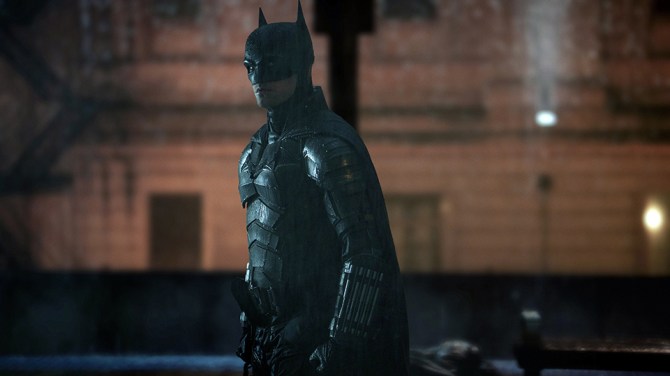 When does The Batman come out?

The Batman premieres in theaters on March 4, 2022.

When is The Batman coming streaming on HBO Max?

When is The Batman coming streaming? The Batman became available to stream on HBO Max on April 18, 2022, which was 46 days after its theatrical release. WarnerMedia CEO Jason Kilar confirmed in an interview with Recode in December 2021 that many of Warner Bros. Pictures DC comics movies—including The Batman, Black Adam and The Flash—will have a 45-day theatrical release before they’re available to stream on HBO Max, Warner Bros.’ exclusive streaming service. “Think about when movies would show up on HBO, which is eight to nine months after theatrical premiere. The Batman is going to show up on day 46 on HBO Max,” Kilar said at the time. “That is a huge change from where things were in 2018, 2017, 2016.”

How to watch The Batman online

How to watch The Batman online for free 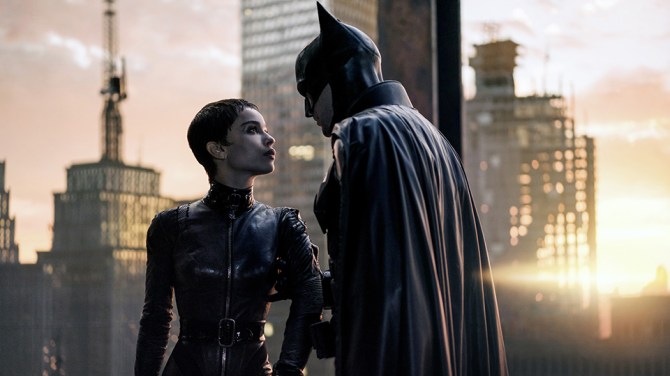 How can one watch The Batman online for free? Read on for our tips and tricks to stream The Batman at no cost, even if you don’t have an HBO Max subscription yet.

Watch 'The Batman' on Hulu With HBO Max $0+
Buy Now

Who’s in The Batman cast?

In an interview with Empire in 2021, director Matt Reeves revealed how his version of Batman is different from past movies about the character. “When I write, I listen to music, and as I was writing the first act, I put on Nirvana’s ‘Something In The Way’,” he said. “That’s when it came to me that, rather than make Bruce Wayne the playboy version we’ve seen before, there’s another version who had gone through a great tragedy and become a recluse. So I started making this connection to Gus Van Sant’s Last Days, and the idea of this fictionalised version of Kurt Cobain being in this kind of decaying manor.” Reeves also revealed that Pattinson’s performance in the movie Good Time convinced him to cast him as Batman. In that movie you could really feel his vulnerability and desperation, but you could also feel his power,”he said. “I thought that was a great mix. He’s also got that Kurt Cobain thing, where he looks like a rock star, but you also feel like he could be a recluse.”

Pattinson also told Empire how his version of Batman is different than the actors before him. “Bruce has been hiding away,” he said. “He’s not really a socialite at all. He’s building all these little contraptions and things, just with Alfred. And even Alfred thinks he’s gone insane!”“ He continued, He’s been out every single night for two years, getting beaten up and shot and stabbed and burnt, and it shows. There’s a bullet graze on the cowl, right at the beginning. I don’t think that’s been done before.”

Will there be a Batman 2?

Will there be a Batman 2? Director Matt Reeves confirmed in an interview with Film UK in February 2022 that there will be a Batman sequel. “You don’t make [movie] number one as if there’s going to be number two,” he said. “You have to make number one as if you are swinging for the fences and it has to be a movie that stands and lives on its own. But I really believe in what we’ve done, and I’d be excited to tell more stories and we are already telling other stories in the screening space. We’re doing stuff on HBO Max, we’re doing a Penguin show with Colin [Farrell] which is going to be super cool, and we’re doing some other stuff too, but we have started talking about another movie. But right now, we’ll just put it out in the world. I’ll try to enjoy this.”

Reeves also told The Los Angeles Times at the time that he wants to do a Batman sequel but doesn’t think it will happen for a while. “I think the first thing is a very long nap and here’s the thing, my feeling in doing the film was always that I would never treat it as a chapter one,” he said. “Because chapter one assumes that there are more chapters. So what I wanted to do was to make this movie a satisfying experience so that people could experience a new fresh version of a character that the world has loved for over 80 years.” He continued, “I think that if we succeed on that front, I know that I have a lot of stories I want to tell, and then we’ll do chapter two, but not because we didn’t make this one a complete experience. Let’s just see what happens, let’s see the audience watch it. I hope they connect to it and if they do then yes there’s definitely more to do, and I will not be napping for too long!”

Star Robert Pattinson also told Entertainment Tonight at the time that he’d be interested in a Batman sequel if Reeves was also down. “I was talking to Matt about it yesterday, and it’s funny because he keeps saying he’s got ideas,” he said. “There’s so much I love. I’m just so proud of the movie and it would be so fun to do it again.” Pattinson also told Den of Geek at the time about the villains he’d like to see Batman fight in a sequel. “I’d love to do something like Court of Owls,” Pattinson said, referring to the 2011 DC Comics story about a secret society that’s ruled Gotham from an underground lair.

The Batman is available stream on HBO Max. Here’s how to watch it for free.