DC Universe fans are finally getting the spinoff they’ve been waiting for, which means plenty are also wondering how to watch Peacemaker online for free right about now—and luckily, we have some tips in store for you up ahead.

Peacemaker, which stars WWE champ John Cena in its title role, picks up right after the events of 2021’s The Suicide Squad. In the James Gunn-directed reboot, Peacemaker emerged as little more than a boneheaded antagonist—one whose warped sense of morality leaves him looking for peace at any cost, even if it takes killing leagues of men, women and children to get there. But in 2022’s Peacemaker, fans finally are getting to know Cena’s character a little more deeply. Not to mention, there are plenty more laughs promised this time around.

Like The Suicide Squad, HBO Max’s Peacemaker is directed by Guardians of the Galaxy filmmaker James Gunn. Following the success of The Suicide Squad, Gunn was approached by HBO Max to work on a DC Universe spinoff series for the streaming service. “They came to me afterward and said, ‘If you were to do a series about any one character?’ I think I could have picked anybody and they would have been OK,” Gunn recalled during an interview with Complex in August 2021. “‘If you made a series with any one character who would it be?’ And I said, ‘Peacemaker.’”

Gunn continued, “In the movie, we get to see the backgrounds of Bloodsport, of Ratcatcher, we learn a lot about Harley. We learn a lot about other characters, but I felt with Peacemaker, we really just scratched the surface of who this guy is, what makes this douchebag tick. I called up John [Cena] immediately and I said, ‘Hey, do you want to do this thing?’ And he was like, ‘Yeah.’”

“He’s a lot of Americans today,” Gunn went on to say of his Peacemaker character. “A part of him is this guy who has very different political beliefs than what I have. Being able to put him in an environment where he’s in the modern world with very different character[s] and to be able to see them interact, I thought was a different way to take what is thought of as a superhero TV show, so that we’re able to address all that stuff.”

As for Cena, Peacemaker’s director had nothing but good things to share. “John and I have become incredibly close,” Gunn said of his star. “He is one of the best people I know, and I mean that as a human being, and he’s an incredibly talented actor.”

When does Peacemaker premiere?

How to watch Peacemaker online 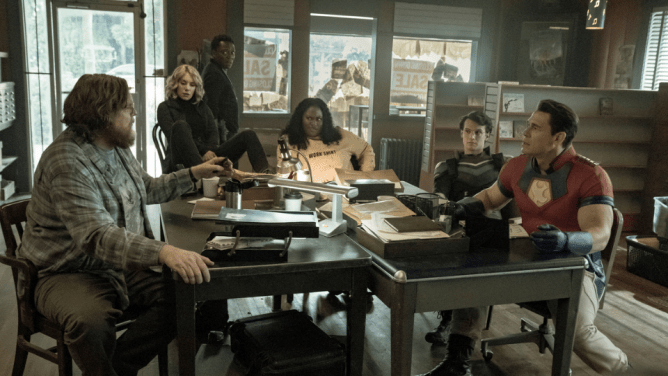 How to watch Peacemaker online for free

So, how can you watch Peacemaker online for free? Read on for our tips and tricks to stream Peacemaker at no cost—even if you don’t have an HBO Max subscription yet.

While HBO Max doesn’t have a free trial, customers can still watch Peacemaker online for free with Hulu’s HBO Max free trial. The service allows users to try both Hulu and HBO Max for free for seven days, which is enough time to watch Peacemaker online for free before subscribing. Just be sure to set a reminder to cancel your subscription before you’re charged. After the trial ends, the service will cost $14.99 to add HBO Max to your Hulu account.

Who’s in the Peacemaker cast?

Peacemaker is available to stream on HBO Max. Here’s how to watch it for free.