If you’ve seen every Ice Age movie, you may want to know how to watch The Ice Age Adventures of Buck Wild online for free to see the franchise’s new spinoff featuring none other than Buck, the one-eyed weasel.

The Ice Age franchise started in 2002 with the first Ice Age movie. The film, which was set in the days of the ice age more than 2.1 billion years ago, revolved around four characters known as The Herd: Manny, a woolly mammoth; Diego, a saber-tooth tiger; Sid, a sloth; and Scrat, a squirrel. The movie was nominated for an Oscar for Best Animated Feature at the 75th Academy Awards and went on to gross more than $383.2 million worldwide, making it the eighth highest-grossing film of 2002 and the highest-grossing animated movie of that year. The success also led to six more Ice Age movies: 2006’s Ice Age: The Meltdown, 2009’s Ice Age: Dawn of the Dinosaurs, 2012’s Ice Age: Continental Drift, 2016’s Ice Age: Collision Course, 2022’s The Ice Age Adventures of Buck Wild and an yet untitled seventh film.

The Ice Age Adventures of Buck Wild, which premiered in January 2022 and is the first Ice Age movie for Disney Plus, centers on Buck Wild, a one-eyed weasel and dinosaur hunter who joins The Herd in the third Ice Age movie, Ice Age: Dawn of the Dinosaurs. The movie sees Simon Pegg return as the voice of Buck as he embarks on an adventure in the Dinosaur World with Crash and Eddie, twin brother opossums who were introduced in 2006’s Ice Age: The Meltdown. “I’m very flattered that they would think Buck deserve that and I have been hinting at it for a long time all through my time on Ice Age,” Pegg told LYFE in 2022. “I’ve always said to Lori [Forte], the producer, that a Buck spin-off would be good and eventually 12 years later here we are.”  He continued,“I really love playing buck, he’s a character that is very dear to my heart and any chance I get to be buck is always a real treat for me and I love doing it again.”

Pegg also told LYFE about what drew him to the reboot, which includes a daughter for Buck. “He’s got his daughter Bronwyn the Pumpkin and he had to learn certain responsibilities as a parent and I think that will come across in this film,” he said. “The script was great but with Buck because he’s such a chaotic character, particularly when he starts talking to his hand or animate objects, it was fun to come up with stuff.” As for how he prepares to voice the character, Pegg told LYFE, “I have to get a good night sleep before I do my voice because it’s exhausting. I just get really hyped up and energetic, have a few bit too many coffees and that usually helps because he’s so on the edge the whole time.”

When does The Ice Age Adventures of Buck Wild come out? 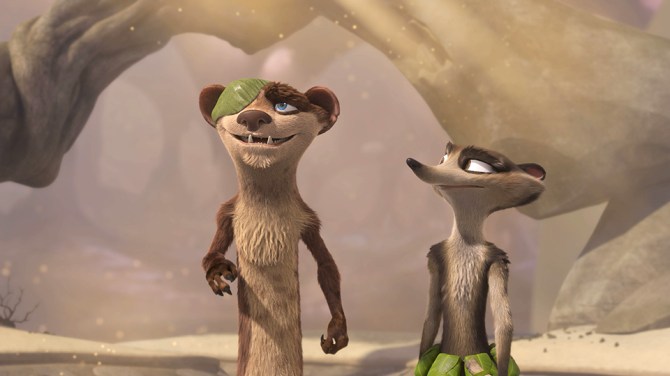 How to watch The Ice Age Adventures of Buck Wild online

How can one watch The Ice Age Adventures of Buck Wild online for free? Read on for how to watch the Ice Age spinoff at no cost, even if you don’t have a subscription to Disney Plus yet.

Who’s in The Ice Age Adventures of Buck Wild cast?

The Ice Age Adventures of Buck Wild is available to stream on Disney Plus. Here’s how to watch it for free.