If you loved the original movie, you may want to know how to watch Hocus Pocus 2 online for free to see the return fo the Sanderson sisters 29 years later.

In an interview with Vanity Fair in September 2022, Sarah Jessica Parker, who plays Sarah Sanderson, revealed that she never imagined a sequel to Hocus Pocus would happen. She credited the sequel happening to her co-star, Bette Midler, who plays Winnie Sanderson. “To be completely honest, for the past 28 years, I didn’t think much about a sequel,” she said. “I wasn’t involved in the conversations. When I found out it was going to happen, I was in shock. Bette was the person who imagined the idea for years and thought that this would all happen. She could not be deterred from the idea, and I admire her so much for believing and fighting for a sequel. The lesson is, listen to the Divine Miss M. She knows what works and how to get it done.”

Midler told Vanity Fair that, around 10 years after the original Hocus Pocus‘ release, she noticed a “huge interest” and “demand” for a sequel. “As the years have gone by, the idea of revisiting the movie kind of snowballed. So many people have come up to me and said they grew up watching the movie,” she said. “And the amount of Hocus Pocus costumes and merchandise I saw was shocking. I went online and even bought a Winifred costume for myself for a benefit I did. So I started making calls to the studio. We thought that it had a life, but there was no interest for a few years. It wasn’t until three years ago [that] the movement started and it got picked up for the streamer. It’s been the most unexpected and rewarding role of my career. It just keeps going.”

So where can fans stream the Hocus Pocus sequel—and do so at no cost? Read on for how to watch Hocus Pocus 2 online for free to see the return of the Sanderson sisters almost three decades later. 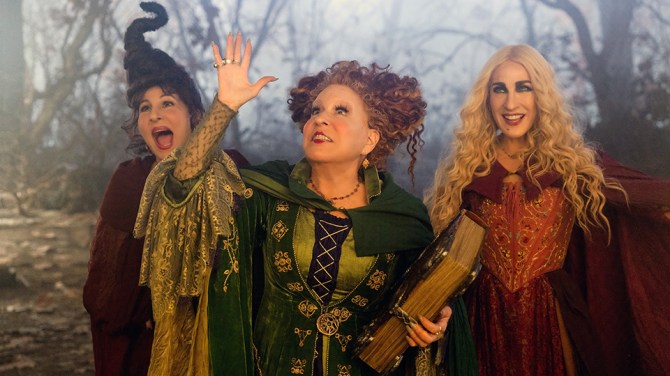 When does Hocus Pocus 2 come out?

How to watch Hocus Pocus 2 online

How to watch Hocus Pocus 2 online for free 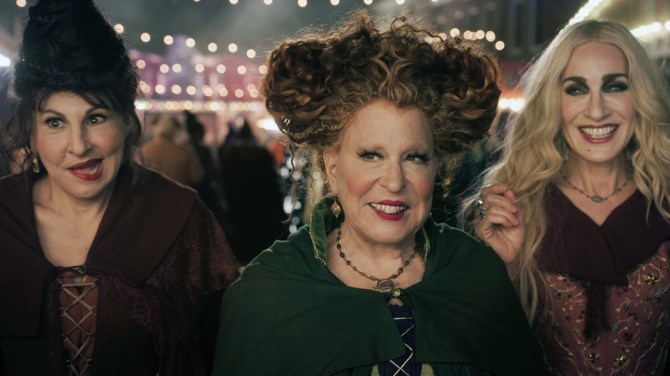 How long is Hocus Pocus 2?

Hocus Pocus 2 is one hour and 43 minutes long.

Who’s in the Hocus Pocus 2 cast?

In an interview with Entertainment Weekly in September 2022, Bette Midler, who plays Winnie Sanderson, revealed that she proposed the idea of a Hocus Pocus sequel 10 years after the original movie’s premiere in 1993 but saw “no interest.” “Even when it became a phenomenon, [a sequel] wasn’t considered. Ten years on, when I started seeing the returns, I was surprised, and I started making call,” she said. “We got no interest at all, and a few years after that, I remember I needed the costume, and I asked the studio to loan it to me, but they couldn’t. My friend suggested that I go online, so I looked, and I was shocked because I’d never seen so much Hocus Pocus merch.” She continued, “I bought the costume, and I came as Winnie here and there, for this benefit or that benefit, and I realized there was something going on. As I watched it progress, I’d call the studio once a year to ask, ‘How about it?’ It wasn’t until about three years ago that they advocated for it, and movement started. It picked up when they decided that they wanted it to be on a streamer. They never looked back until they got their movie.”

Kathy Najimy, who plays Mary Sanderson, explained that it took a while for the original Hocus Pocus movie to become the phenomenon it is today. “It came out in summer, but I think it should’ve come out in the fall. It sort of did okay but went away. What we think happened was, people weren’t sure if they could bring their kids or not, and wondered if it was scary or not. When it came on television, it became a runaway train. Parents showed it to their kids and those parents showed it to theirs. It was a surprise to us all,” she said.

Will there be a Hocus Pocus 3?

Will there be a Hocus Pocus 3? While Hocus Pocus 3 hasn’t been confirmed, Sarah Jessica Parker, who plays Sarah Sanderson, told Extra in September 2022 that she would do a third Hocus Pocus movie is Bette Midler, who plays Winnie Sanderson, also returned. “Bette is already starting rumors,” she said. “I hitch my wagon to her star. If she wants to do a third one… No one says no to the Divine Miss M.” While Parker never anticipated there would be a sequel to the 1993 original Hocus Pocus, she credited Midler for making sure Hocus Pocus 2 happened. “Bette was the person who had this fervent wish that this would happen and could not be deterred from the idea. You should ask her, ’cause she will say, ‘Absolutely, I always imagined. I’ve been telling them for years,'” Parker said.

Kathy Najimy, who plays Mary Sanderson, for her part, told People in September 2022 about what it would take for her to come back for a third Hocus Pocus movie. “It was fun, but it’s not nothing. It’s a lot. But who knows, you know what I mean? Who knew that almost 30 years later we’d be doing this sequel,” she said. “I think if we did it 30 years later again, well, there would be walkers and canes involved. The flying might just be a little one-foot blip off the ground. Never say never. Who knows? I can’t answer that.”

Midler, however, confirmed to Entertainment Weekly in September 2022 that she’s all in for Hocus Pocus 3 because of her love for franchises. “I’m envious of other actors who have franchises, and I was hoping for a sequel to First Wives Club, but we never got that,” she said. “After 30 years with no sequel to Hocus Pocus, I’ve always been envious of people who get to do their favorite character more than once. The fact that we got to do this finally, after 30 years of promoting the idea, I’m glad we got to do it. I’d love to have a franchise — especially a character I love playing.”

Hocus Pocus 2 is available to stream on Disney Plus. Here’s how to subscribe for free.