If you love TV, you may want to know how to watch the Emmys 2022 live online for free to see which of your favorite shows win big and which go home empty-handed.

The Emmys, which are voted on by the Academy of Television Arts & Sciences, started in 1949 as an award show to honor the best of the best in television. The Emmys are considered one of four major entertainment awards in the United States, along with the Grammy (for music), the Oscar (for film) and the Tony (for theatre.) Less than 20 people have won at least one Emmy, Grammy, Oscar and Tony, which make up an EGOT.

As for what an “Emmy” is, the word is the French version of the television crew slang term, “Immy,” which is a nickname for image orthicon,” a camera tube once used in early television cameras cameras. The design for an Emmy award is a winged woman holding an atom. The award was designed by television engineer Louis McManus, who used his wife as the model for the trophy. “The statuette of a winged woman holding an atom has since become the symbol of the Television Academy’s goal of supporting and uplifting the arts and science of television: The wings represent the muse of art; the atom the electron of science,” the Emmys website reads.

This year’s 74th Primetime Emmy Awards honor the best of American primetime television from June 1, 2021 to May 31, 2022. The awards follow the 74th Primetime Creative Arts Emmy Awards, which were held on September 4 and September 4, 2022, and honor the best in artistic and technical achievement in American primetime television. So where can fans stream the Emmys 2022? Read on for how to watch the Emmys 2022 live online for free to not miss a moment of television’s biggest night. 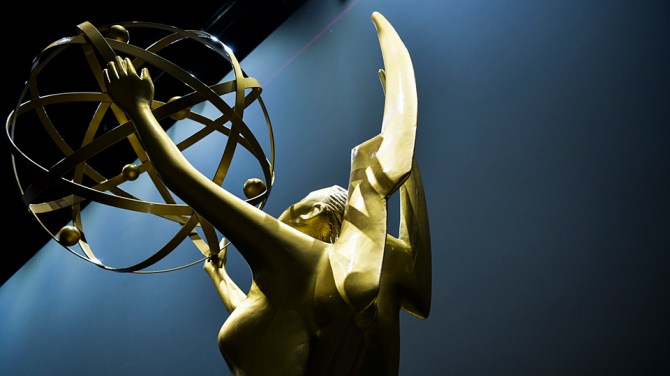 How to watch the Emmys 2022 live online

How to watch the Emmys 2022 live online for free

How can fans watch the Emmys 2022 live online for free? Read on for how to stream the 74th Primetime Emmy Awards at no cost.

Fubo starts at $64.99 per month for its Starter plan. The next level up is the Pro plan, which costs $69.99 per month. The final level is the Elite plan, which includes $79.99 per month. Fubo also offers a fourth plan, Latino Quarterly, which does not offer a free trial, costs $33 per month and includes 34 Spanish-language channels, a DVR of 250 hours, and the ability to stream on up to three screens at the same time.

If you want to watch the Emmys 2022 live online for free, there is a way, but you’ll need to be an Xfinity subscriber or know someone who is. Customers who have Xfinity Flex, Xfinity X1, Xfinity Internet or Xfinity Digital Starter TV accounts can receive a Peacock Premium subscription for free. Yes, free. Peacock has a guide for how to connect your Xfinity and Peacock accounts, but we also listed the steps below

Another way to watch the Emmys 2022 online for free is to be a Cox subscriber or know someone who is. Cox customers with an Essential internet plan or a higher video package can receive a free subscription to Peacock Premium. Customers with Cox’s Contour Stream Player or Starter Video plans also have access to free Peacock Premium. See step-by-step instructions for how to watch the Emmys 2022 online for free with Cox’s free Peacock Premium subscription below.

Sling Orange and Sling Blue each cost $35 per month, while Sling Orange & Blue costs $50 per month and includes a combination package of both plans. However, Sling has a current deal where new subscribers can sign up for any plan for 50 percent off their first month, which cuts the price of Sling Orange and Sling Blue to $17.50 and Sling Orange & Blue to $25 for a new subscriber’s first month. The deal makes Sling the cheapest live TV streaming service on the market right now. Sling TV also has a current add-on promotion where new subscribers can receive one month of Showtime, Starz and EPIX for free. The promotion saves users $24 from subscribing to Showtime ($10 per month), Starz ($9 per month) and EPIX ($5 per month) as add-ons without the deal.

The Emmys 2022 are held at the Microsoft Theater in downtown Los Angeles.

The Emmys 2022 host is Kenan Thompson, who is best known as a cast member on Saturday Night Live. Thompson also starred in the NBC show Kenan, as well as Nickelodeon’s All That and Kenan & Kel. At an Emmys 2022 preview event in September 2022, Thompson reacted to Chris Rock and Will Smith’s Oscars 2022 slap and revealed what he would do in the situation. “I think a good comic is supposed to be aware,” Thompson said. “I mean I’m not calling Chris a bad comic, he just wasn’t necessarily aware of that situation, so it’s not fair to lump him into that conversation. But overall those kind of roast-y kind of people, you have to be smart, because you know, there’s a way to jab at people without offending, like for real for real. I don’t think offense necessarily gets us anywhere as a society.”

He continued, “I feel like a hug moment would have stopped all of that, you know what I’m saying? But it was so unfathomable that [Rock] didn’t know that was even coming. He would have never in his wildest dreams have imagined his friend of 30-plus years would attempt some shit like that.”

Thompson also confirmed that he isn’t intending to hurt any guest’s feelings with his own comedy routines at the Emmys 2022. “You know, I’m not going out there like hurting anybody’s feelings for the sake of other people laughing,” he said. “We’re supposed to all be laughing together, even that person the joke is about.” He continued, “This being a roasting opportunity kind of night, a lot of people expect to hear that. [My approach is] more so about the zeitgeist about what’s going on, maybe like the jokes are about the shows or the different platforms. Because it’s bigger than a famous person who’s having a moment, because it’s a room full of famous people.”

Thompson also told The Los Angeles Times that he didn’t ask his SNL co-stars Michael Che and Colin Jost, who hosted the Emmys in 2018, for advice. “I have not been in touch with them, necessarily,” Thompson said.. “I’m going to be pretty straightforward — a good monologue and keeping the energy up will be my approach. I enjoy honoring artistry and creativity.” Thompson also teased what he’s the most excited about when it comes to the 74th Primetime Emmy Awards. “There’s a great team that’s involved. I definitely don’t feel like I’m floating out there by myself,” Thompson said. “I’m really excited about it. There’s some great pieces coming together.”