If you were a fan of I Love Lucy, you may want to know how to watch Being the Ricardos online for free to see what happened behind the scenes of Lucille Ball and Desi Arnaz’s relationship.

Being the Ricardos, which was written and directed by Aaron Sorkin, stars Nicole Kidman and Javier Bardem as Lucille Ball and Desi Arnaz, the real-life couple who starred in the lead roles of I Love Lucy. The movie follows Ball and Arnaz’s relationship while filming the sitcom, which ran for six years on CBS from 1951 to 1957. According to Amazon Studios‘ official description of the film, Being the Ricardos provides a “revealing glimpse of the couple’s complex romantic and professional relationship” and “takes audiences into the writers’ room, onto the soundstage and behind closed doors with Ball and Arnaz during one critical production week” of I Love Lucy.

The movie also stars J. K. Simmons and Nina Arianda as Ball and Arnaz’s co-stars on I Love Lucy, and Tony Hale, Alia Shawkat and Jake Lacy as writers on the sitcom. In an interview with Extra in December 2021, Kidman opened up about why she wanted to play Ball. “That is something that Javier and I want to honor,” she said. “But at the same time, you want it to be a true depiction of who they are so that people watching it go, ‘Oh, OK…’ Aaron’s really gone in there, he’s done them proud, but at the same time he has been very true to their spirits… They’re compelling, fascinating… people and at the same time—they are human.”

If you want to see Kidman and Bardem as the stars of one of the greatest American sitcoms of all time, you may want to know how to watch Being the Ricardos online for free. Read on for our tips and tricks to do that.

When does Being the Ricardos come out?

Being the Ricardos premieres in theaters on December 10, 2021. The movie is available to stream on Amazon Prime Video starting on December 21, 2021. 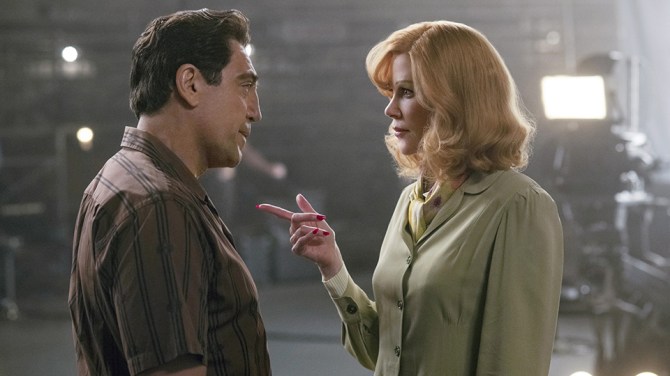 How to watch Being the Ricardos online

How to watch Being the Ricardos online for free

Watch Being the Ricardos With Amazon Prime Video’s Free Trial

Watch 'Being the Ricardos' With Amazon… $0+
Buy Now

Watch Being the Ricardos With Student Prime’s Free Trial

Watch 'Being the Ricardos' With Student… $0+
Buy Now

Who’s in the Being the Ricardos cast?

The Being the Ricardos cast includes Nicole Kidman and Javier Bardem in the lead roles of Lucille Ball and Desi Arnaz respectively. In an interview with TODAY, Kidman responded to claims that she shouldn’t have been cast as Ball because of how different they look. “[I’m] a human being, so there’s times when you go, ‘Gosh, maybe I’m not the right person for this,’” she said. “That’s where having somebody like Aaron, who really said at the beginning, he was like, ‘I’m not wanting a perfect rendition or imitation of Lucy. No, no, no, no, no.’”

Though she didn’t know Ball, Kidman confirmed that she can relate to the fellow actress. “A lot of it I can relate to, and I go, ‘Ah, OK, I’ve been in that situation. I know that,’” she said. “So I think those things were relatable.” She continued, “There’s a scene in it where they say, ‘You’re 39, and that’s it. It’s kind of over for you,’” Kidman recalled. “I know that feeling. I sort of had that. And it was like, OK. Where television suddenly opened a door for her, it opened a door for me. Around the same age, I was like, ‘Gosh, that’s kind of … I know that feeling really deeply.’”

Ball’s daughter, Lucie Arnaz, also defended Kidman’s casting in a Facebook post in January 2021. “Here’s the deal,” she said at the time. “You should understand, we are not doing a remake of ‘I Love Lucy.’ No one has to impersonate Lucy Ricardo. … It’s the story of Lucille Ball, my actual mother, not Lucy Ricardo, and her husband, Desi Arnaz, my dad, not Ricky Ricardo. There will be humor in the film, but it is a story of the two of them and how they met and what went right with finding the show, what went wrong, their relationship, their love affair.”

See the full Being the Ricardos cast below.

How long is Being the Ricardos?

Being the Ricardos is two hours and 11 minutes long.

Being the Ricardos is available to stream on Amazon Prime Video. Here’s how to watch it for free.