The popular messaging app Snapchat has been making the news rounds this morning after revealing that they’d walked away from a three billion dollar offer from Facebook (you read that right, three billion dollars). You, like many of us, might initially think, “$3 billion for a glorified sexting app seems like a lot of money,” but 350 million messages sent per day is nothing to scoff at.

Brands and celebrities are even starting to utilize the platform to get news out to their fans. Just this past Friday, Britney Spears used Snapchat to reveal the sexy new lyrics and cover art of her new single “Perfume,” whose title font even resembled that of Snapchat’s signature scribbles.

Now we’re not experts at putting multi billion dollar valuations on companies with zero revenue, but we are experts at staying on top of the latest mobile sharing apps. For those of you who still think the app is exclusively for teenagers and folks interested in sexting, here are six (non-pervy!) reasons that you should download and start using Snapchat right now.

1. Its primary purpose is just for fun.
Twitter brings us news, Facebook brings us marriage photos and friend updates, and Instagram give us major FOMO. What’s Snapchat’s place in the mobile app pantheon? Well, it’s pretty much just for fun. The messages erase themselves and have to be taken live (not uploaded in advance) so there is no room for editing and no need to take your time composing the perfect selfie. Removing this pressure for capturing a temporary moment in time lifts the gravitas, and boosts the fun factor.

Greg Littley, the director of strategy at ICED Media and an avid Snapchat user, told us, “Snapchat gives you that immediate messaging that is more direct and seemingly more personal than the more traditional social platforms. For me, Snapchat is a fun useful way of adding different bursts of content (video or scribbled static images) to my ongoing social conversation.”

2. It’s easy! Promise.
Snapchat has a great user experience that is on par with the top players in terms of ease, aesthetic, a cute iconic logo, and an addictive return rate thanks to its exclusive use of friend-generated content. Here’s how it works: Download the app, sign up via Twitter or Facebook, and find your friends (Snapchat generates a list of people who are also signed up via your existing contacts and your other social media lists). Next, take a picture or short video that you want to send. Remember: you have to take it within the app, and do not have the ability to save content for later! (Don’t worry, that’s part of the fun.)

You can then use your finger to choose a color and either draw on the photo or scribble something funny.  Scratch that artistic itch, and really make your content fun!  For those of you who aren’t fingertip savvy, you also have the option of just adding typed text on top of the image or video. From there, choose who you’d like to receive your message from your friend list, and voila! You’re snapping.

3. Your friends do things they would never normally do on camera.
Yes, we still mean this in a non-pervy way! Unlike other social networking apps that hold onto your old photos and status updates forever, Snapchat’s images disappear after only a few seconds. This means that people often let their guards down more than usual.

Note: This doesn’t stop people from quickly taking a screen-shot of your Snapchat, so still be a little wary about what you share, and whom  you share it with. The good news is that you get a notification of who and when any friend screen-shots one of your photos, so you’ll know who has the evidence!

We wouldn’t normally take photos of ourselves making Cara Delevigne-esque goofy faces or short videos lip singing Lil Wayne’s “Stuntin Like My Daddy” without fear of future blackmail use, but Snapchat has now given us that low-risk freedom. You get to know your friends on a completely different level than before. 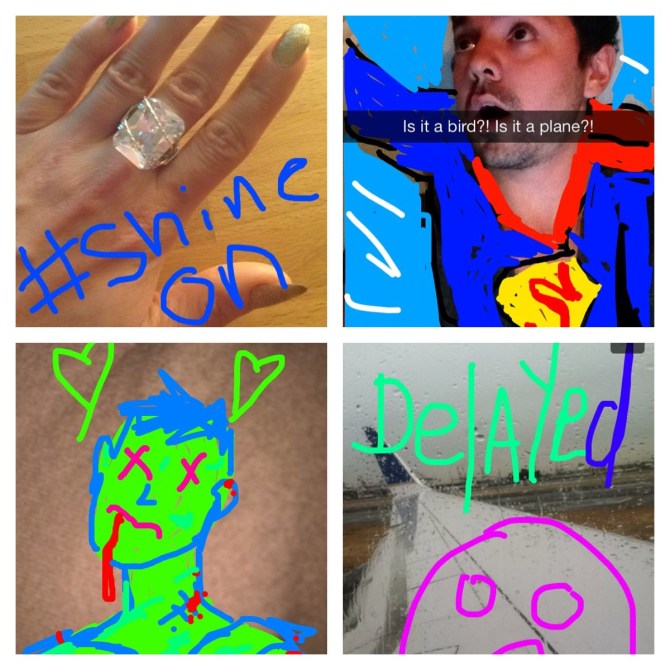 4. It’s funny to see your friends’ handwriting.
Honestly, when was the last time you got something hand-written from your friends? We spend all our time emailing and texting, and there’s a kind of thrill around seeing folks’ hand-written scrawls. Added bonus: When you spend day in and day out reading well-crafte emails and articles written by colleagues and respected writers, it’s impossible to hold back a laugh when they scribble “Hey Betches! #Miley” in hot pink writing on  a three-second video of them twerking in a bar.

5. Snapchat Group Messaging is the best thing ever.
More often than not, snaps are sent in a group message to a curated list of Snapchat friends. Snapchat groups are different than most other types of messaging groups, because your group members don’t see who else is in the group. (Fun, right?) It’s all one-way messaging, and receivers can choose to message you back individually or send back a message to a group of their choosing.

This makes silly messages more private than Twitter, and more interactive than a text. Amanda Gabriele, the Managing Editor of COED Magazine, told us, “I like the fact you can send photos or video not in a text message or email. It doesn’t create pressure for the person on the other end to reply.”

6. It gives you a reason to communicate if you have nothing to say.
It might seem like you have plenty of different ways to communicate with people—why add one more? But sending a Snapchat is a way to send things that you’d like to share with your friends, but that may be too insignificant and awkward to send in a text, status update, or email.  Is your friend dancing in an embarassing way? Snapchat.

Did your small bucket of popcorn at the movies turn out to be hilariously large? Snapchat. Are you bored at the airport and want to make a fun video waving goodbye? Snapchat. Your friends will appreciate you sharing your precious moment (even if they choose not to participate in it) while not taking up any more of their photo album data space.

In an age of NSA snooping, and people posting entirely too much incriminating, personal content on more permanent social platforms, it’s refreshing to send something that disappears completely four seconds later (and yes, this time we mean the pervy stuff, too).