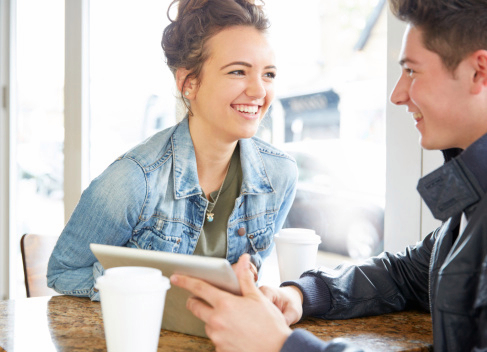 Meeting people seems to be getting harder and harder these days. Everyone’s eyes are stuck to their iPhones when they’re in public and it’s becoming a trend to avoid all eye contact in general, which means that even the most confident ladies have a hard time walking up to a stranger and making a conversation out of thin air.

Any man you ask will tell you that eye contact, a smile, and confidence are the surefire ingredients to get him interested, but sometimes we just need a little help to get things going. In an effort to make the going a little easier, here are 15 easy ways to start a conversation with any guy.

1. Ask for a recommendation.
Whether it’s for a new album to listen to or which bar has the best happy hour deal in town, asking for a recommendation from a guy is an opener that can easily evolve into more of a conversation. From their, offer your own recommendations on the topic at hand and find some common ground.

2. Talk about the environment you’re in.
The space you’re in when you’re talking is immediately something you have in common. Comment on how gorgeous the space is — or how packed it is — to open up lines of communication and go from there. If you’re in a crowded area and you feel confident enough, suggest moving to the outskirts so you can actually chat.

3. Pay him a compliment.
There’s no need to gush over the guy, but complimenting something about him you find attractive or intriguing is just about guaranteed to be met with a smile. Even if it’s something as simple as talking about his beard or a nice pair of shoes, there’s no one who wouldn’t enjoy being complimented.

4. Bring up the book he’s reading.
Naturally, this one only works if he’s reading a book, but it’s especially seamless if you happen to be in a bookstore or library when you meet. If you’re familiar with the genre, mention one of your favorites. No idea what the book is? Inquire about whether it’s worth picking up for yourself.

5. Ask a small favor.
Simply asking someone for the time or for directions is such a casual way of opening up conversation, and it happens to be one of the easiest tasks for someone who’s typically shy. Once you’ve asked, you can introduce yourself and mention where you’re headed (if the situation allows).

6. Comment on his shirt.
If the guy you’re eyeing is wearing a shirt that gives any kind of clue as to his interests, like a vintage band tee or a college hoodie, use it as an in. Ask if that’s his favorite band or where he went to college, and the conversation will likely fly from there. After all, he may have purchased the shirt at the band’s concert, or he may have just stolen his brother’s favorite hoodie.

7. Talk about the weather — if it’s unusual.
Global warming has basically made weather an always unusual part of life, which works in a conversationalists favor. On a super-sunny afternoon after a morning of monsoon rain, all anyone wants to talk about is the drastic weather change, making for a perfect opening line. It might be typical small talk, but it works.

8. Offer to get his coffee.
If you happen to like a guy at work, why not offer to pick up coffee when taking a Starbucks run? By doing this, he’ll probably reciprocate (one would hope!) and a new mini-habit might be formed. When it’s his turn after a few weeks, offer to go with him—voila, instant date.

MORE: I Brought a Male Escort to a Party: What Hiring a Date is Really Like

9. Make a suggestion.
Start off with, “I couldn’t help but notice that…” and make a suggestion based on the situation. Does he look lost? Is the back of his shirt not tucked in? Pay attention to your surroundings and go from there.

10. Brush by him and excuse yourself.
This one can tend to feel a little forward, but managing to casually brush past a guy, then turning around to excuse yourself and make eye contact basically does the work for you. Most of the time, if you smile when you look back, he’ll take the conversation from there.

11. Go for the puppy.
Dogs are the easiest conversation starters in the book. If you’re in the park one day and spot a guy you just need to talk with, head over and start asking questions about how long he’s had the dog and what breed it is. Everyone loves to talk about their pets, and you’ve got nothing to lose.

12. Ask why he’s at the same party.
When you meet a random guy at a friend’s housewarming party, the best opener is simply asking how he knows the host. Whether his answer is that he’s been best friends with the host for 10 years or that he’s never even met the person throwing the party, you’ve got something to talk about.

13. Talk about his tattoo.
It’s becoming more and more rare to spot guys without tattoos these days, which makes opening up a conversation incredibly easy. Ask when he got it, what it means, and if he’s planning on getting more. Tattoos are incredibly personal but also approachable, so you’ll likely be able to have some good talking material.

MORE: 25 Summer Date Ideas That Anyone Can Plan

14. Tell him who he looks like.
It may sound silly, but there are few men alive who will walk away if your opener is something along the lines of, “You look like Ryan Gosling.” Whether he does or he doesn’t, he’ll soon be flattered and the two of you will likely be laughing.

15. Simply introduce yourself.
All too often, people have entire conversations before they even mention their names. Start off by introducing yourself, ask his name, and say that you wanted to come talk to him. This one takes some serious guts, but if you do it with confidence, a smile, and eye contact, it’s a tried and true recipe for success.