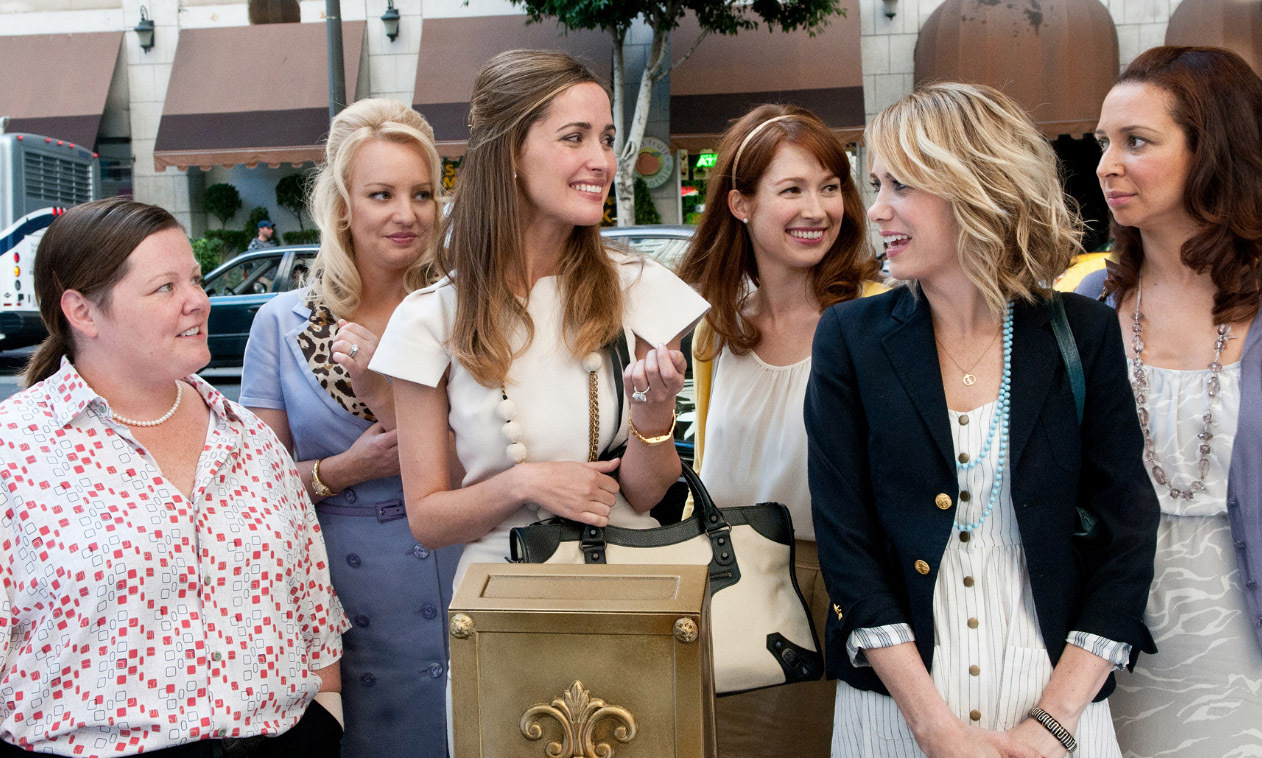 Picture this: You just got a giddy text message from a friend showing off a bright, glittering diamond. And then she pops the question: Will you wear a (possibly hideous) dress and be her bridesmaid? If the bride-to-be isn’t a legitimately close friend, you’ve probably got some reservations. Maybe your financial situation isn’t stellar at the moment. Maybe you don’t have a ton of time off from your demanding job. Or maybe you just don’t have it in you to do another round of showers, slideshows, poems, penis straws, vacations, and receptions. But you still say “YES!!! Definitely!!!” Why?

The truth is, saying no to someone’s special day is incredibly hard for us girls, according to lifestyle and wedding etiquette expert Elaine Swann. “Many women accept the initial offer and wind up being in a bind, which can put a strain on the friendship,” she told us.

Luckily, this isn’t an offer you can’t refuse. Even if you don’t say “I do” to your pal, you can still diffuse the situation and keep your friendship intact, even as a runaway bridesmaid.

CAN YOU REALISTICALLY AFFORD IT?
Some women are perfectly content spending as much money as necessary on their betrothed friend, while others firmly believe it’s out of touch and downright nervy to expect friends to drop a ton of cash for someone else’s big day. Michelle,* 26, a photo editor in New York City, said she said she felt “compelled” to say yes to a good college friend, not expecting the cost to get out of hand.

“Honestly, I don’t think I had any idea what I was getting myself into financially,” she said. But after a dress, accessories, hair and makeup, travel, and a hotel, it ended up being a $1,000 promise.

According to Wedding Wire, the total cost of being a bridesmaid ranges from a few hundred dollars to a few thousand, no small feat when you’re stuck dealing with rent payments, bills, and student loans. Multiply that by several weddings, and you’re looking at a small fortune.

If money is a concern, Swann recommends calculating the cost of the dress, as well as flights, parties, food and drinks, gifts, and accessories before you emphatically tell her you’re in.

HOW CLOSE ARE YOU, REALLY?
The idea of saying yes to everything is something that we’re conditioned to do as women, Swann said. But rather than blindly agreeing to every offer, really take the time to think over your friendship with the bride-to-be. “Go back and take a look at your relationship,” Swann said. “Is this someone who you feel close enough where you want to participate in such a monumental part of their lives?”

If your oldest, dearest friend in the world asks you to be bridesmaid, it’s a given you’re going to accept and go through all necessary motions, even if you’re not into the bells and whistles associated with traditional weddings. But how about when it’s an acquaintance? That’s where things get tricky.

Brittany,* 31, a property manager in Manhattan, was asked by an old college friend to be a bridesmaid for a 2014 wedding. They were tight in school but had drifted apart since graduation.

Rather than saying yes and regretting it, Brittany weighed her options and made a decision. “I declined by saying I felt honored that she’d asked but that I’d just switched jobs and had a lot going on at the time and felt that I wouldn’t be able to do everything required of a bridesmaid,” she said. “Being a bridesmaid is supposed to be an honor, but it’s a job.”

Jessica,* a 29-year-old stylist living in Chicago, was asked to be a bridesmaid by a woman she considered to be more of a B-list friend than a serious friend. Still, she felt obligated to say yes, and so she agreed.

“How can I say no if I’m that special of a person to her?” she told us. “I thought of how much fun it would be, and I said yes because she asked.” But the emotional strain turned out to be overwhelming: The bride got drunk during her bachelorette party and called Jessica “stupid” and made a host of unreasonable demands on Jessica’s time. Though the bridesmaid dress and transportation were fairly cheap, Jessica says the drama just wasn’t worth it; she should have gently turned the offer down.

HOW CAN YOU SAY NO?
If you really can’t commit to being a bridesmaid, do it quickly and gently, Swann says. The worst thing you can do is sit on the offer or come across as apathetic.

Also—and this is key—don’t offer any unnecessary information, like “I can’t afford it” or “I can’t take time off,” since the bride will likely do everything in her power to find a way for you to be in the wedding party, short of calling your boss or starting a Kickstarter campaign.

“It’s best not to explain, because you set them up for the opportunity to offer to help fix it, meaning you’re still not off the hook,” Swann adds.

Instead, try this handy script, either in an email or in person, never via text: “Thanks so much for asking me to be a bridesmaid. Unfortunately, I’m not going to be able to do it.” Then throw in a “however,” letting her know how else you could be involved in her big day, whether that’s offering to help with the bachelorette party or oversee some part of the wedding day festivities.

“That way, you’re making the conversation less about saying no and more about what you’ll do for them,” she says. Understand that the bride may very well be taken aback—many women think it’s an honor to be asked—so be prepared for some bristling.

A wedding is a high-stress occasion—after all, you hope to have only one in your lifetime, and even the most well-meaning people can let their emotions get the best of them. “I think brides often forget that their wedding shouldn’t be a burden on their friends,” Brittany said.

THE BOTTOM LINE
For Michelle, going to wedding after wedding through the years made her think about her own nuptials and what she wants to do without.

“I don’t think I want bridesmaids,” she says. “I just don’t think I could ask people to make those financial commitments for me.”

But Jessica says that after being a bridesmaid seven (!) times, she’s more self-assured in who her close friends are and who she is as a person.

“Hindsight is 20/20,” she says. “I probably could have backed out of the wedding … I wouldn’t have lost a friend because we haven’t spoken since then. There was no love lost, and I could have saved myself so much hassle.”