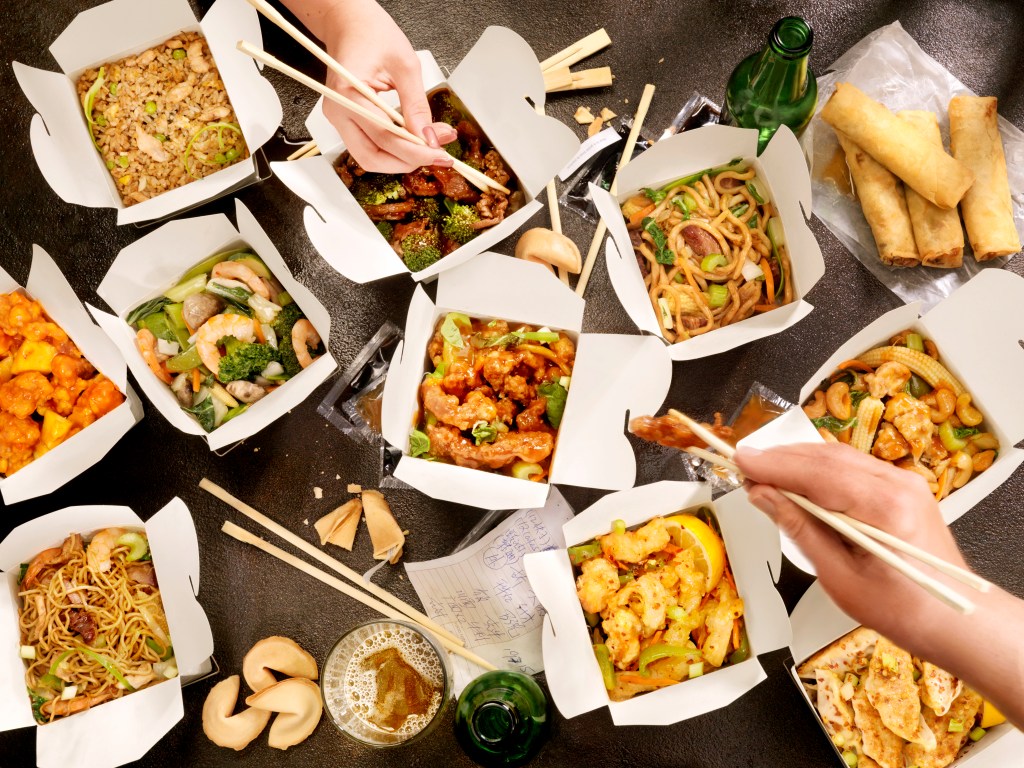 I don’t know about you, but when I was single, a few bites of cheese, some crackers, and wine definitely counted as a meal, as did bowls of cereal. I’m not saying those were the most nutritionally sound choices, but it was fine because I was doing me—eating what I wanted, when I wanted, without having to plan for or think about someone else’s appetite or needs (like the fact that plenty of guys don’t consider a meal to be “dinner” if it doesn’t involve meat).

Also, when you’re single, there’s one less person vying for your time and attention, leaving you that much more time to go on a long, luxurious run or a full hour-long workout. Who’s going to be wondering where you are? It’s all me-time and zero we-time. Hopefully, wehen part of a couple, in addition to eating full meals together, you’re also getting laid and burning some extra calories to make up for missing the gym to stay in bed together—but there’s only so long that sex can be your main source of exercise before it starts to show.

With that said, I talked to two experts to get their take on the best ways to prevent (or deal with if it’s already happened) those dreaded “love pounds.”

MORE: 9 Easy Tips to Help You Look Slimmer in Photos

While we get that no one ever wants to get fat, gaining a few pounds at the cost of a great relationship is a pretty small price to pay—and also pretty normal. “Gaining weight in the beginning of a relationship can be emotional,” says relationship expert Laurie Davis Edwards, founder of eFlirt and author of Love @ First Click
. “You’re getting comfortable with someone, and that’s a good thing. The focus often moves from creating and maintaining a certain physique and switches to creating and maintaining emotional closeness. Making this switch is healthy because it usually means you feel more loved, accepted, and appreciated for who you are on the inside rather than externally.” So basically, if you were more motivated to diet and work out because you were constantly going on dates, you can relax a little bit. Enjoy it!

If you do notice that you and your partner have gained a few (it often happens simultaneously), make an effort to step things up in bed. The more sex you’re having, the more often you’re naked and in touch with your body and its needs, the less likely you are to eat that fourth slice of pizza when you’re already full. “For both men and women, weight can have a big impact on sex drive, and in turn a couple’s entire sex life,” says dating expert Sameera Sullivan, founder and CEO of the matchmaking website Lasting Connections. “Gaining weight may affect the way you feel about your body, and if you feel self-conscious and insecure, this can make you feel less spontaneous in the bedroom.” The fix: making sex, or whatever you have to do to feel good about yourself, a priority.

It can be a sensitive subject for both sexes, but assuming neither of you has a history of eating disorders or serious issues with food, it can help to bring it up and be open and honest about weight gain—whether it’s yours or your partner’s (or both). “As a couple continues to grow, they are often afraid to tell the other person they are gaining weight out of fear of hurting their feelings or starting an argument,” says Sullivan. So gently broach the subject by making a lighthearted joke about your dual habit of postdinner snacking or how you’ve let your gym membership go unused. If your S.O. seems open to it, let them know that you’re trying to make a healthy change, and would love it if they joined you in setting some weight-loss goals. Bonus: Research shows that working out with other people can be more effective than going it alone.

If your weight gain happened to coincide with the time frame after you tied the knot, that’s not unusual. “I see people gain weight most frequently right after their wedding because couples tend to diet and work out routinely leading up to the wedding,” says Sullivan. “But after the big day, this tends to stop, and it’s easy to fall back into old eating and snacking patterns. A lot of couples also indulge on their honeymoon—sometimes that’s enough to trigger your weight going in the wrong direction.” To avoid this trap, set some goals—solo or together—for getting back into a healthy eating and workout routine after the excitement (and stress) of the big day dies down. Many brides lose weight before their weddings unintentionally, so once that anxiety is gone, it’s important to find a new routine to keep you moving—whether that’s trying a new kind of class or signing up for a half marathon.

Eat a Little Less than Your S.O.

This rule applies only if you’re in a relationship with a man: Remember that men and women don’t need the same amount of food to fuel their bodies. Men have more lean muscle tissue than women, and that burns more calories than body fat, even during rest. You probably already know this fact abstractly, but remind yourself of it daily if that’s what it takes to make sure you don’t scarf the same portions as him. “Don’t base your meal off what he is ordering, but instead order a healthy entrée for yourself and skip appetizers,” suggests Sullivan. “Another tip is not to share food. It might seem smart to split a dessert, fries, or a pitcher of beer, but in truth, it will prompt you to consume more than you typically would.” And keep healthy snacks on hand, too, since men don’t just eat more, they also eat more often.

Make Sure You Have Healthy Outlets for Anxiety

A little comfort food adds up over a long time. “I believe that most men and women gain weight simply because of life’s daily stressors,” says Sullivan. “When you come home from work, you want to be together, have a nice dinner, meet for drinks, or treat yourself to dessert, and the weight gain happens slowly over time. People feel they have found the right person and now there are more responsibilities like moving in together, getting married, having a baby, and they don’t focus on themselves as much as they did when they were single.” Those big life changes are all great things; just be careful not to use food as an outlet for your anxiety over the future, the pressure to make money, overperform at work, and be the perfect wife/friend/sister/daughter. Finding an exercise routine you love is the best way to replace food as a stress remedy.

If All Else Fails, Consider What’s Really Causing the Weight Gain

It’s tempting to blame a few extra pounds on the wonderful laziness that comes with some serious relationships—weekend mornings in bed, followed by brunch, followed by more bed—but if it’s a lot more than a few pounds, and it’s getting worse, it might be time to look at the root of the problem. “If you’re feeling unhappy about your or your partner’s weight gain, ask yourself it that’s really what is bugging you,” suggests Davis. “After a year together, one of my clients is finding it impossible to accept her boyfriend’s gut. But when we dig into why, it doesn’t come down to attraction. When we discuss what their future looks like, she doesn’t know the answer. When you’re unsure of someone, it can manifest in other ways, and it often means that small things become larger issues.” So if you’re worrying about your or your partner’s weight, ask yourself whether you’re really happy in the relationship. Hopefully, the answer is yes and you can revert to the above tips—but if not, it’s better to be honest with yourself now, before the weight gets worse, not to mention being stuck in the wrong relationship.

MORE: If These 8 Signs Sound Familiar, It’s Time to Take a Break from Dating