When I look at smoothie bowls, I see stability. Intentionality. The act of springing, not rolling, out of bed early each morning to calmly slice bananas and delicately sprinkle chia seeds. I see someone who cares—not just about nutrition, but about ingredient curation and topping arrangement, too. Making stunning smoothie bowls is a kind of domestic arm form, the spiritual descendant of table arrangement and potpourri.

I also see a kind of tranquility and self-actualization that feels as foreign to me as horseback riding or separating clothes by color before tossing them in the wash (rather than dumping all of them in at once, hitting “cold cycle” and hoping for the best). The kind of person who creates smoothie bowls has reached a point of serenity that I find alluring, though entirely alien.

So I decided to try to become that person for a week—at least, through my breakfast selections.

MORE: How to Make the Perfect Charcuterie Plate, According to Actual Charcutiers

Moments after vowing to make a smoothie bowl every day for a week, I realized what deep shit I was in. Not only have I never used a blender in my life, but I can’t remember the last time I fixed myself a breakfast more elaborate than a Clif Bar. Not to mention, I don’t really care about food. Whereas some live to eat, I eat to live; if asked, any of my loved ones will confirm how deeply I resent being forced to put stuff into my body every six hours just to keep it from rebelling against me.

I began my journey by browsing social media—namely, Pinterest and Instagram—to find doable recipes. I quickly learned the coolest-looking smoothie bowls are hiding the darkest secrets. Every “mermaid bowl” I found was made using algae, and some particularly decorative smoothie bowls call for edible flowers. I don’t want to eat algae (and I don’t want to drop $16 on edible flowers
, either).

That said, I managed to compile a handful of recipes that drew from the same central cast of ingredients: berries, bananas and almond milk. This helped me cut down my grocery bill—and limited the number of things that could go wrong.

Next stop: the grocery store.

With hope in my heart, I headed to Whole Foods (which I figured was my best bet for weirdo-beardo ingredients like maca powder and bee pollen). I couldn’t find any of my exotic ingredients and didn’t want to pay $40 for a banana, so I jetted to a lower-key store to buy the bulk of my produce. The only thing I couldn’t obtain there was the maca, which I’m now convinced is a made-up thing that never existed in the first place.

Then, I borrowed my boyfriend’s NutriBullet—and some of the vegan protein powder his mom had shipped him. Blender (and ingredients) in hand, I was ready to go.

I wanted to start with something simple—and to get over my deep hatred of blending fruits and vegetables together (one of my strongest-held convictions, and one that’s gotten me into more than one fight with close friends). So I went with a bowl that’s mostly berries, bananas and spinach. (Get the recipe here.) 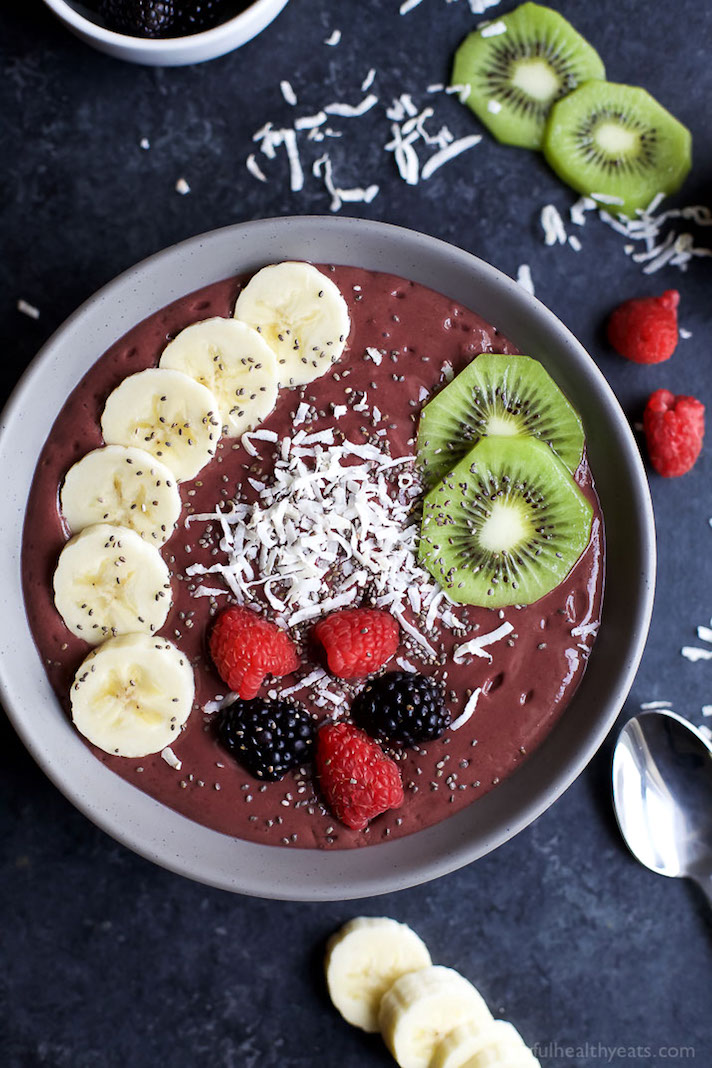 It blended fine, but then I suddenly remembered smoothie bowls are supposed to look neat. I took my best stab at arranging some blackberries and chia seeds on the top to create a smoothie bowl that my roommate, Coreena, kindly deemed “lackluster.” So I added a kiwi slice for contrast. It was definitely the best anyone could have expected someone like me to do. 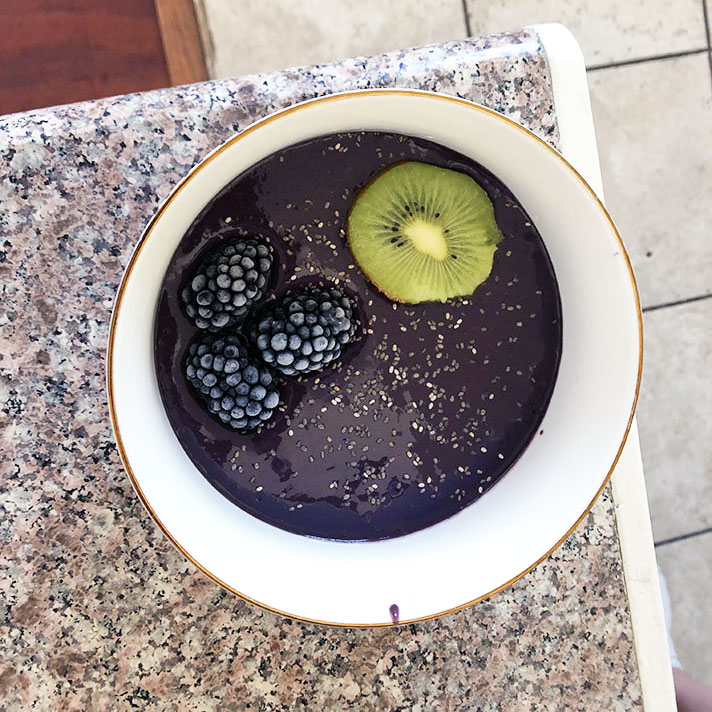 I took my first bite, aggressively aware of the spinach I’d crammed into my creation, and was actually pleasantly surprised. The smoothie bowl was tasty and thick, and I definitely couldn’t taste the spinach.

I considered how peaceful assembling the ingredients and eating a meal in the morning was (haphazard smoothie bowl decoration aside, of course). Maybe I was going to be good at this after all, I thought. Maybe this will change my perception of food as an inconvenience.

For Tuesday, I selected a mint chocolate cauliflower smoothie. Odd, I know, but the photos of the smoothie looked incredibly artful. Plus, I was giving this whole vegetables-in-smoothies thing a shot. (Get the recipe here.) 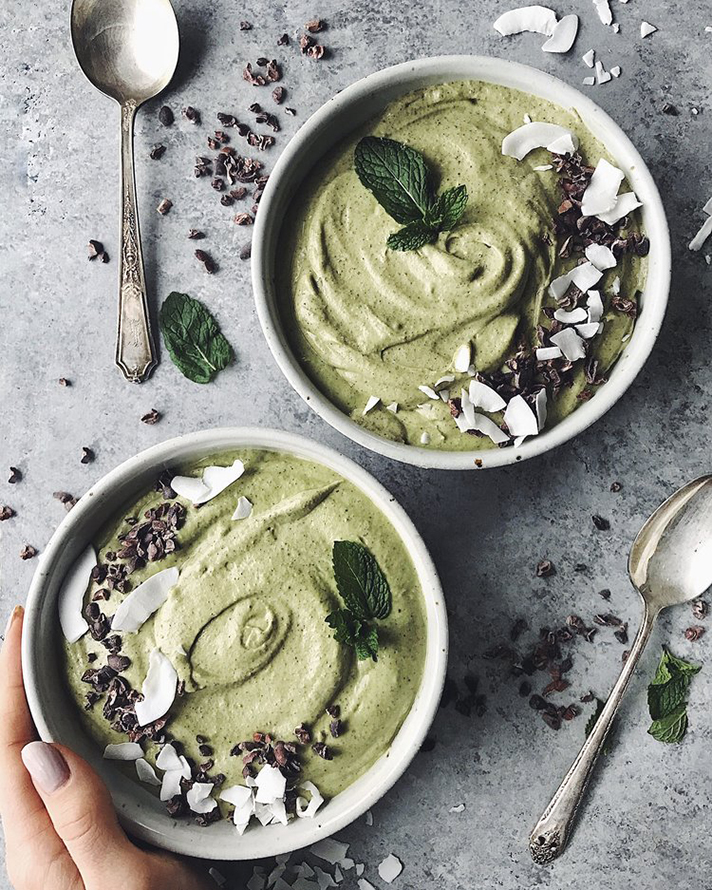 As I prepared to make my assuredly delightful mint chocolate bowl, I realized I’d forgotten to buy anything minty. (Remember when I thought I might actually be good at this?) But it was too late. I couldn’t run to the store now—and I definitely couldn’t miss a day.

So Coreena (who decided to hop on the smoothie train for Day 2) and I soldiered on. 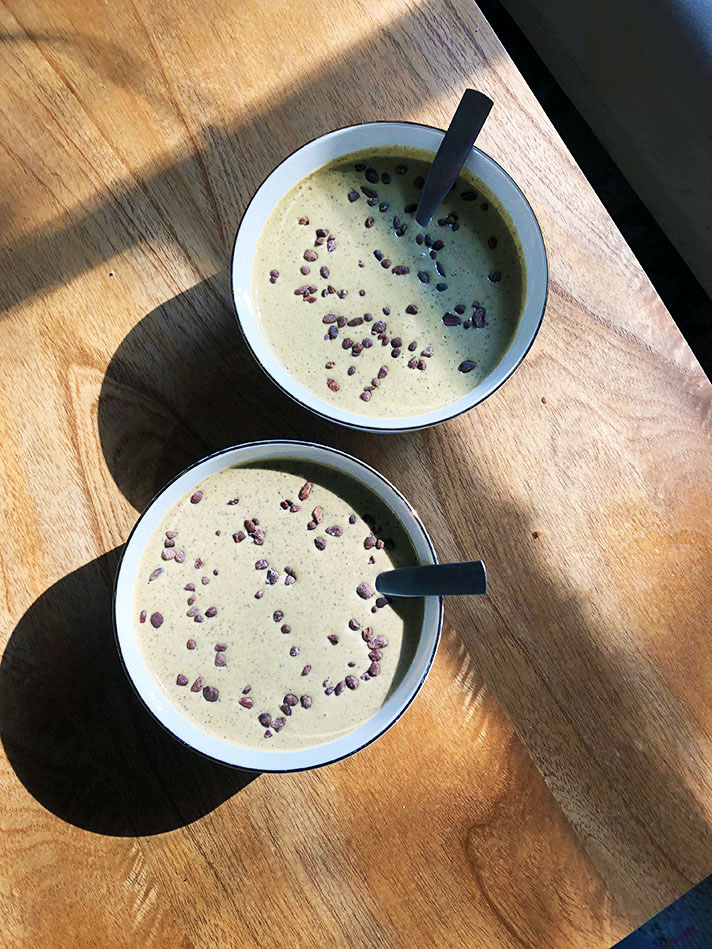 I was delightfully surprised by how nice the bowls ended up looking. They were definitely prettier than yesterday’s, and I actually managed to nail the minty green color (despite, of course, having wholly forgotten the mint).

Then, we took our first bites. “Wow, you can really taste the cashew,” Coreena offered. I agreed. For a bowl that didn’t have “cashew” in the name, it did taste suspiciously cashewy. I went back to the recipe and realized I definitely accidentally tripled the amount of cashews per bowl.

Coreena put her game face on—adding vanilla to her bowl in a desperate bid for relief from the nuts. But both of us called it quits about one-third of the way through our bowls. I felt bad for Coreena, whose reward for trusting me was falling victim to a very untasty smoothie bowl.

I no longer thought I would be good at this.

I opted for a matcha smoothie bowl on Day 3. Given my deep love for matcha, I figured this one would be a slam dunk. After her brush with cashews galore, Coreena unsurprisingly declined to stick around for this morning’s experiment. (Get the recipe here.) 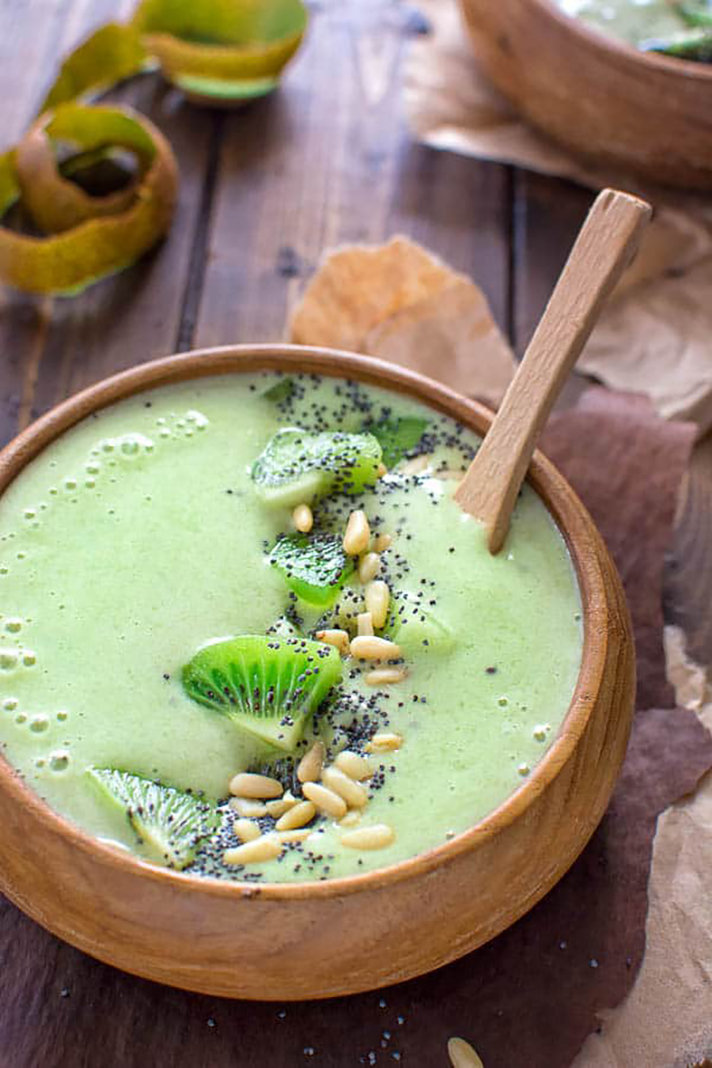 The smoothie bowl I took inspiration from was served in a wooden bowl. I didn’t have one of those, so I displayed mine on a wooden countertop, instead. I also traded the carefully curated stream of chia seeds, sliced kiwis and nuts (never again) in the original photo for larger kiwi slices and berries (my favorites). I’ve gotta be honest—the final product looked pretty great. 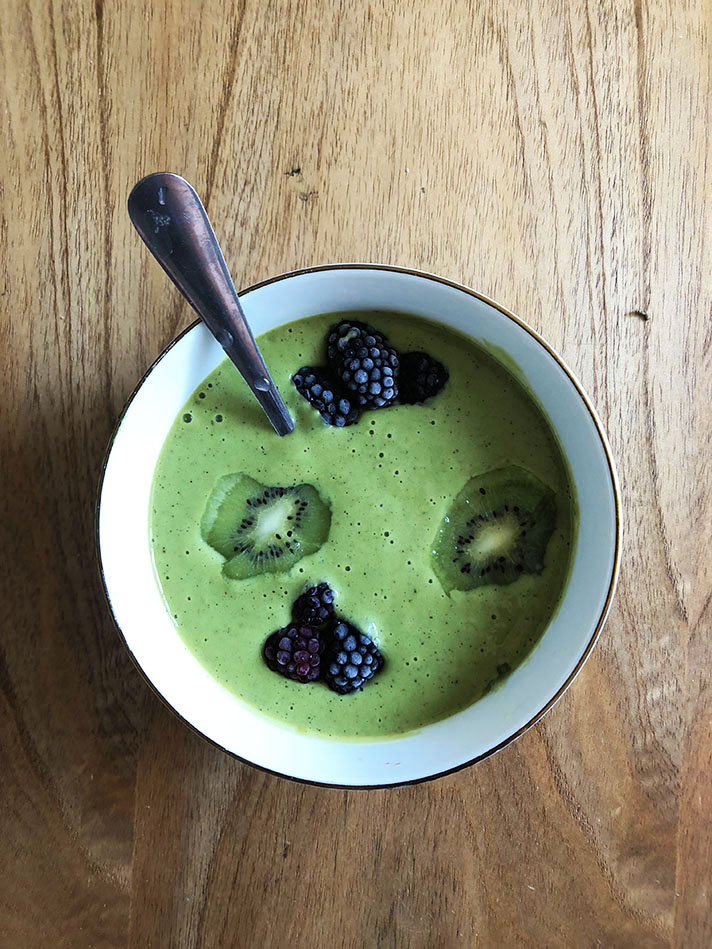 I sat down to enjoy my green creation, and my mouth began to feel tingly. I wondered if this is what serenity felt like—the tingling transcendence of nirvana. It then dawned on me that I’m definitely minorly allergic to kiwis and I’d just never had the chance to realize it before this experiment.

I dumped the bowl out and called it a day.

I woke up physically tired from staying up too late and spiritually drained at the thought of assembling yet another attractive smoothie bowl. I’d planned to test-drive a “BEST Green Smoothie Bowl EVER” recipe, but, now wary of the color green, I pivoted. I substituted a recipe that involved ingredients from Monday’s success, a golden day where nothing went wrong and no one was poisoned. (Get the recipe here.) 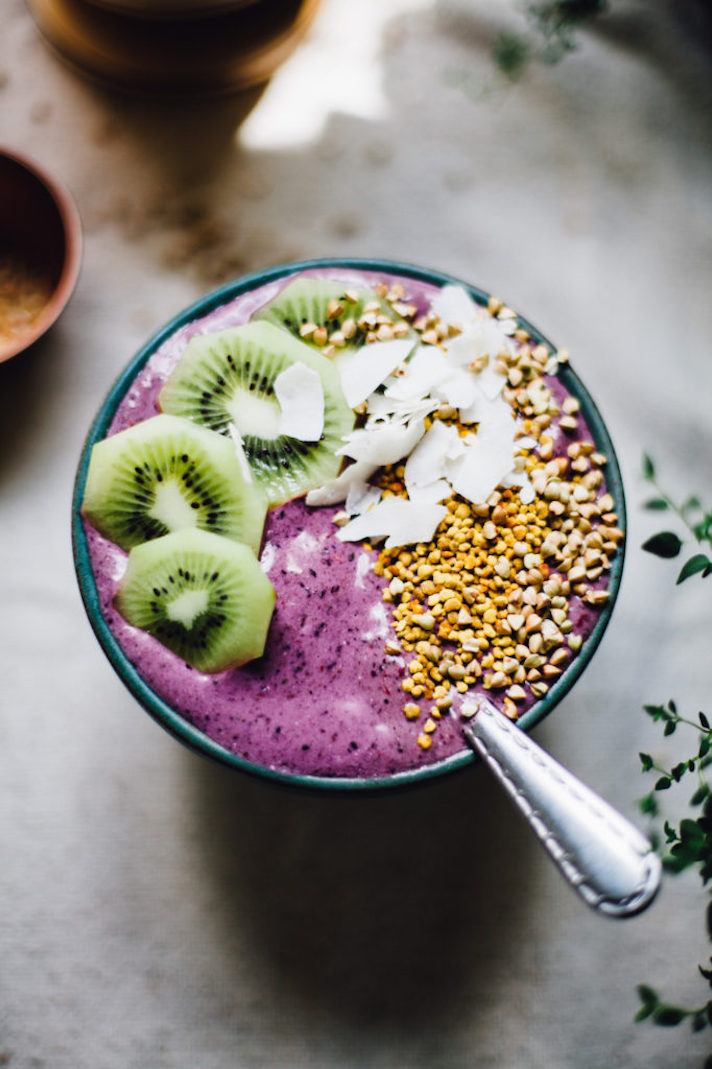 Nutritionist in the Kitch.

The smoothie bowl I took inspiration from was absolutely beautiful, but the ingredients strewn atop it just weren’t happening for me. Raw buckwheat groats? Not in my kitchen cabinet. Bee pollen? Nope. Coconut flakes? Did not buy; I wasn’t willing to purchase anything to use purely as a topping. Sliced kiwi? Obvious pass.

Instead, I plopped a few blackberries down, arranged them in a pretty pattern and left it at that. 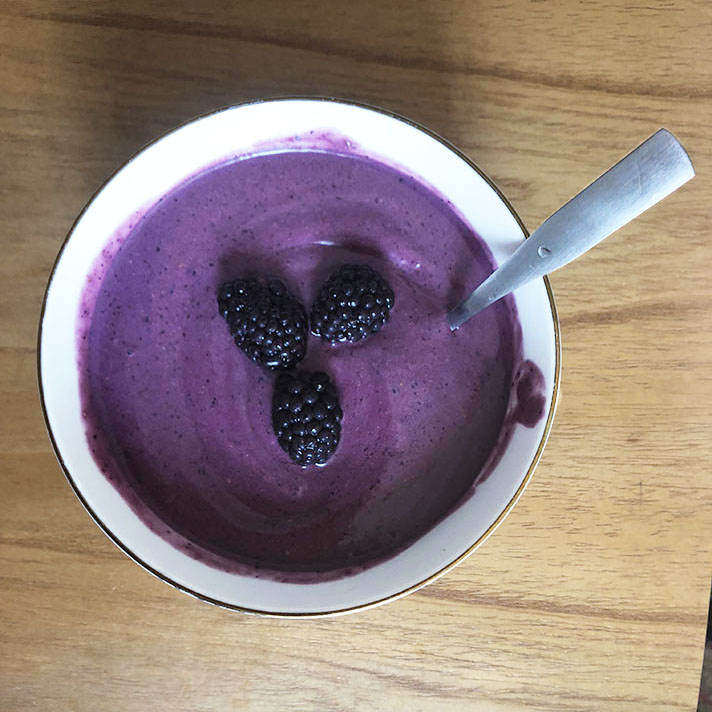 When I went to select my fifth and final smoothie, I knew I wanted some kind of treat. So I chose a variation of one of my favorite snacks: a peanut butter and banana smoothie. This bowl was exactly like that—except, you know, in a bowl—and I even snuck some Nutella into it. (Get the recipe here.) 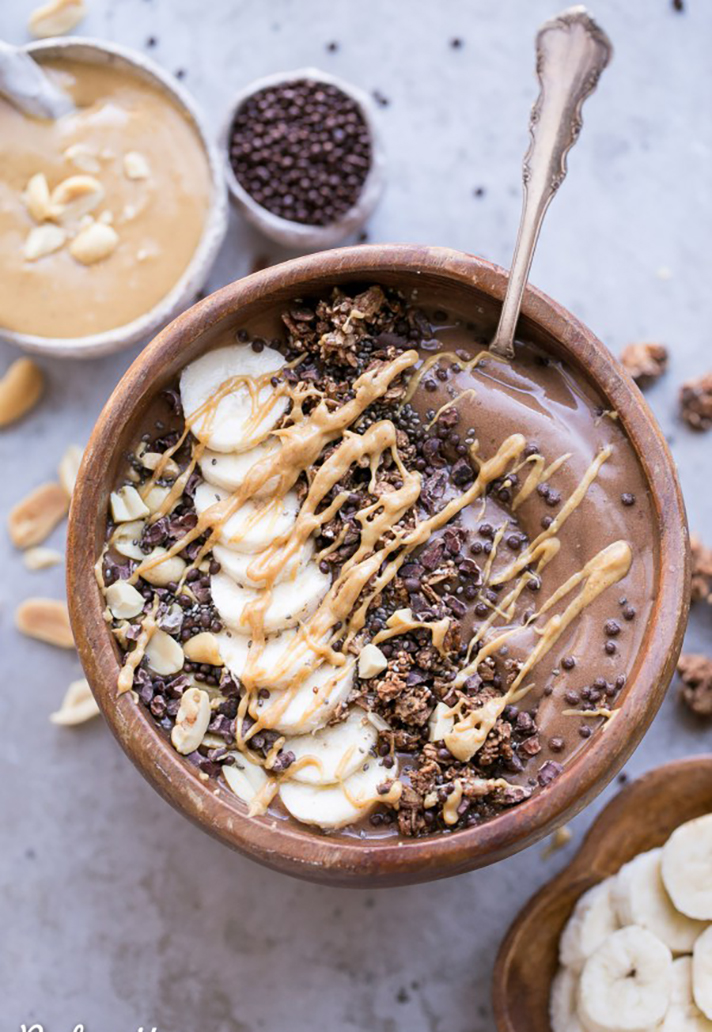 I had realized by this point that I simply do not have the discipline to cut my banana into perfectly even slices, daintily drizzle peanut butter or artfully dust chocolate nibs onto anything, so I took a more minimalist approach when it came to decorating this bowl.

The final product looked kind of like a chocolate chip cookie in smoothie bowl form—not ugly, but not Instagram-worthy perfection, either. 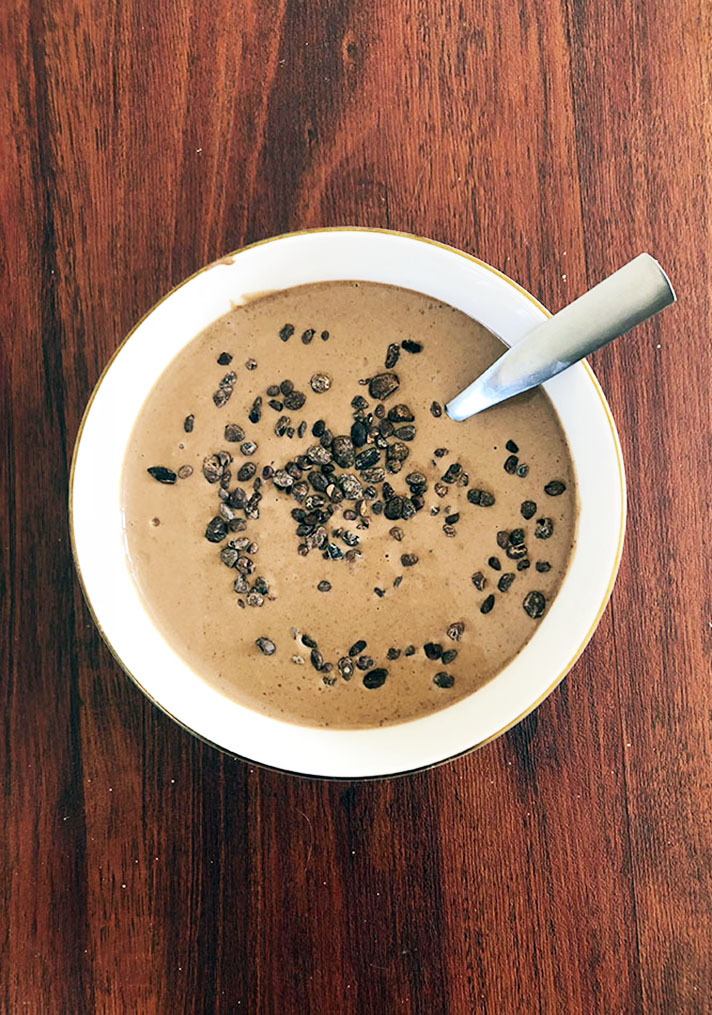 Unfortunately, by the time I sat down to eat this tasty treat, my smoothie-bowl fatigue had kicked in hard. I was so tired of slurping liquid out of a bowl, rather than straight up drinking it, that I couldn’t even enjoy one of my favorite sweet snacks.

On Monday, I reflected that this experience might teach me something about the therapeutic potential of food prep. I’ve come to realize that while creating smoothie-based masterpieces might be fulfilling for some, it isn’t for me. I’ll have to find my self-actualization, serenity and intentionality elsewhere. (Maybe I’ll start separating my clothes by color before I toss them in the washing machine now!)

Though I was completely sick of smoothie bowls by the end of this week, I did walk away with some newfound knowledge: