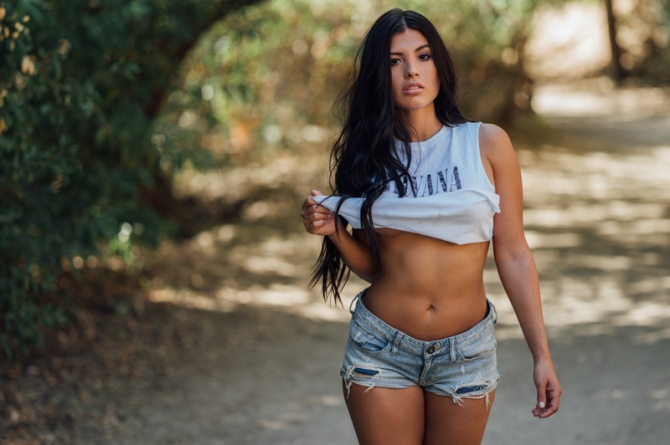 Photographer Stephen Vanasco—Van Styles for short—has a cool 693,000 Instagram followers. He’s clearly a super-talented guy, and there’s a unique, compelling perspective in each and every one of his photos, but there’s one theme in his photos that makes them really stand out, and that’s the hot women he shoots, known as “Van Styles” girls.

Interspersed with urban skylines, gritty landscapes, and action skateboarding shots, Van’s photography features an array of beautiful women of all looks, ethnicities, and body types but the one thing they have in common is that they all look very, very sexy, without much (visible) effort, in what are typically revealing, body-conscious outfits, positions, and angles.

That’s a rare thing to find in today’s culture of social-media oversharing, selfie overload, and less-than-tasteful posts, so we grilled Van to find out exactly how he does it.

Check out a few of his photo-taking and styling secrets below:

StyleCaster: First of all, when did the “Van Styles” girl become a thing? Can anyone be one?
Stephen Vanasco: I’ve been shooting women since 2002, and I just shoot what captivates me. I would say that, yes, any woman can be a Van Styles girl. I’ve shot models with lots of experience and lots who have never done a shoot at all.

When and how do you think women posting pictures of their bodies became more commonplace?
I think the more people see others gaining some amount of success and fame on a platform like Instagram, it’s evident that others will attempt to follow. I don’t think it was only because of people like Kylie Jenner—I think it was because you were able to see women who weren’t famous by any traditional route getting jobs, traveling, and meeting different people.

How have people’s attitudes about women posting sexual photos of themselves changed?
It seems to have become part of a pop culture, which, to me, means it is becoming more of a norm. There are still some people who have their negative point of view, but what are you going to do?

What are common mistakes when it comes to posing in sexy pictures?
Copying someone else’s photos is a common one. Some photos just convey a sense of thirstiness or cheesiness. That energy of trying too hard can easily transcend a photo.

Any tips on how women can look naturally sexy on IG?
Be yourself. If you’re goofy, show that. Don’t be afraid to show your true personality. To me, sexy is a woman who is honest with herself and not trying to project false imagery.

Can you give tips for beginners interested in shooting or posing for sexy photos?
Moving at your own pace is always good. No one has to jump into swimsuit or lingerie shots. Do what feels comfortable. If it feels forced when taking a photo, then don’t take it. As for pulling off sexy shots, I think anyone can. It’s all about confidence.

How did you get into photography?
I was born in N.Y. and moved to L.A. when I was younger with my family. At 12 years old I discovered skateboarding, and it changed my life. Looking at Thrasher magazines in the early ’90s what was my first exposure to what photography can do. I wound up skateboarding from my teens into my 20s, but it would also lead me to a transitioning point for photography. I was running a skateboard camp for kids one summer and got to know a gentleman who owned an adult film company had his three sons enrolled with me.

Later, after I turned 21, he asked if I would produce a skateboarding-themed adult film for him. Coming from skating, I thought it would be a crazy adventure, so I took it. The project did well, and he offered me a job. That would lead to me having an opportunity to learn photography for his productions. Fast-forward about eight years, and I found myself overworked in the adult industry. During that time, photography had become my passion, similar to how skateboarding consumed me when I was younger. I pretty much threw caution to the wind to see where it would take me. Given the first subject matter I learned to shoot with was women, I figured I would just keep it going beyond.

How would you describe your aesthetic?
I would say off the hip. I never use mood boards or “inspirational” photos. I would rather go into a shoot with my mind as a blank canvas and just create as the model and I go. I love natural lighting and prefer more casual captures than forced poses. I love to find the photo as it comes.