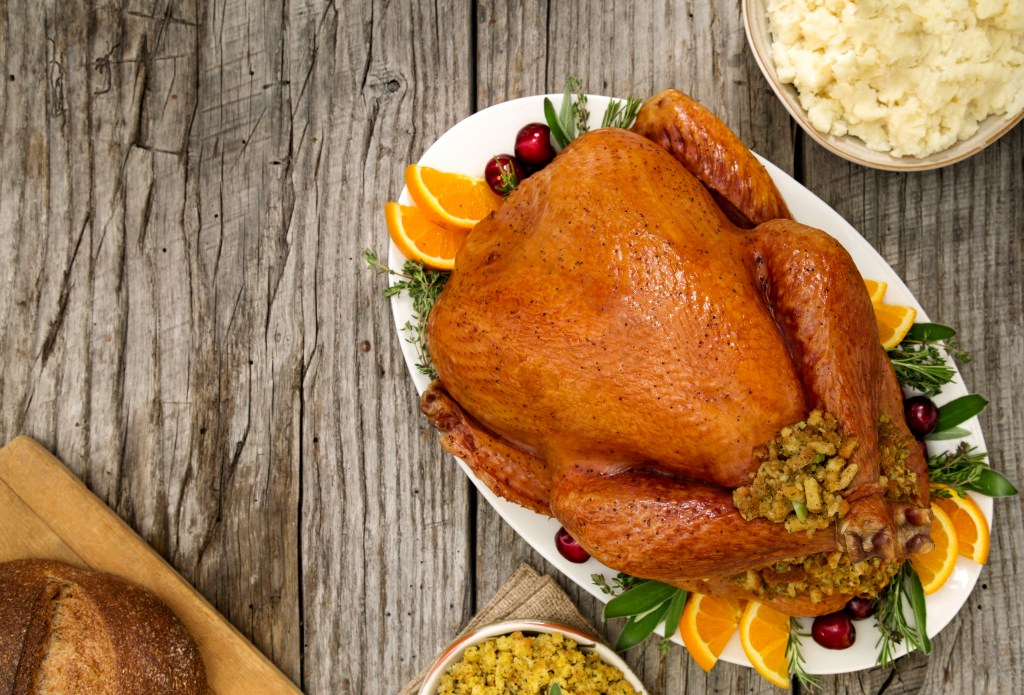 You’ve watched countless YouTube videos, pinned hundreds of recipes, and corralled a pretty solid guest list because you’re finally going to host your first Thanksgiving dinner. And while it’s easy to think about all the (obviously delicious) turkey, stuffing, and pie you and your friends will consume, the devil’s in the details for planning such a big event.

We caught up with Atlanta-based lifestyle guru Mandy Kellogg Rye of e-commerce site Waiting on Martha (who herself has hosted dozens of successful Thanksgiving dinners) to get real tips on hosting the perfect Friendsgiving, sans drama.

Forget what your parents did.

Just because your mom (or dad!) slaved away for hours cooking the perfect turkey, creating tureens of homemade gravy, crafting a centerpiece that belongs in the Louvre, and supplying the holiday table with a mysteriously inedible Jell-O dish doesn’t mean you have to. “Especially if it’s your first Thanksgiving, it can get crazy overwhelming,” Rye says. The better alternative? “Keep it simple.” This is your Thanksgiving, so don’t try to re-create every detail of what your family did in the past.

Though it’s easy to get inspired to make all the food for your guests, the key to being a successful host, Rye says, is having a deliciously curated list. “If you’re the host, pick your three things, like turkey, dessert, and stuffing,” she says. “Let your friends take the green bean casserole; have someone else bring the wine.”

Not only does this make things easier on you, but it also benefits your guests by taking the guesswork out of figuring out what to bring.

For the same reason that actors and brides-to-be have rehearsals before opening night or the wedding, you should do a run-through of your menu to work out any kinks, Rye says, so you’re not scrambling or stressing out about a never-before-tried recipe.

Let’s be clear: Rye’s not suggesting that you make two full Thanksgiving meals, but if you’re going to tackle a particularly tricky pie recipe that you’ve never attempted before, why not whip it up ahead of time and make necessary adjustments the second time? That way, you’ll be a pro on Game Day.

Nowhere is it written that you have to make everything from scratch, the day of. Your friends won’t disown you if you buy a premade pie crust for your pumpkin pie, Rye says. And a lot of prep work can be done long before it’s time to sit down to dinner.

Pumpkin pie can be made up to two days ahead, while all your chopping—including onions, celery, herbs, and potatoes—can be done a day before. In the same vein, you should set the table a few days in advance so guests arrive to a beautiful spread.

Anyone at a party can attest that there’s nothing more embarrassing than running out of booze, so Rye urges hosts to over-buy. Honestly, just go to town.

“You can never have enough,” she says (music to our ears!). But it doesn’t have to be fussy. Keep the bar menu to a red—like a pinot noir—and a white—she recommends a crowd-pleaser like sauvignon blanc—plus beer, bubbly, and one signature cocktail.

Her favorite? A DIY St. Germain and Champagne cocktail with a frozen cranberry garnish. “Put out all of the ingredients, and just let your guests serve themselves. It’s so simple!” she says.

Try to have fun. (Seriously, try.)

Remember, you won’t be judged for the bake on your dinner rolls, so check your anxiety at the door. “There’s nothing worse than a stressed-out host,” Rye says. “So whatever you do, remember to enjoy the day. It’s about celebrating the year and celebrating the season.”