As a Social Media Editor, you’d likely assume that my life revolves around likes, comments, and followers—and to an extent, it does. When it comes to my job, those things are pivotal, reflecting the work I do and the content that our audience resonates with at STYLECASTER. However, being involved in social media every day, I’m acutely aware of its effects and how every one of us uses these platforms differently. So when I learned the platform will give users the ability to see or hide likes on Instagram, I knew the reviews would be mixed.

Recently, Hailey Bieber came out as one of many celebrities to discuss some of the detrimental effects social media has on mental health. The model sat down on her YouTube channel, having a candid conversation about why she’s not only limited her time on Instagram and other platforms – but why she’s also begun limiting who can engage with her content. While thousands of comments making comparisons can take a toll quickly, this conversation doesn’t apply only to celebrities with millions of followers; It applies to you, me, and the more than one billion other Instagram users out there today.

As of Wednesday, May 26, every user on Instagram will have the option to choose whether or not they continue to see like counts on their feed. Back in March, a bug caused users to get a first look at this feature—likely, without even realizing it. During these two years of testing, the app eliminated some user’s likes permanently while leaving other accounts intact. Rumors have swirled since 2019 that Instagram would remove everyone’s likes eventually, with little to no communication from the team themselves on what was in store—until now.

Not only will users have to ability to choose whether or not they see other’s likes, but with each individual post, users can decide if they want others to see the like count on their own photo. Amongst a number of new features, this allows users across the app to customize their own usage in a way that best suits their needs and their content. According to Instagram, the goal of presenting these features is to give users “more control over their experience” and “place more power back in users’ hands”. While the platform has already made strides in the direction of protecting mental health and working to eliminate what many call “life’s highlight reel”, the newest feature is the most aggressive step to date.

Current settings don’t allow users to control likes at all, and comments can only be moderated in two ways; turned off altogether or accessible to only those you follow back. Starting today, you’ll be able to use Artificial Intelligence to screen comments from everyone on Instagram and to block certain DMs. You’ll be able to create rules to block comments with specific words or phrases that may be harmful or offensive. This, combined with other new settings, like blocking any new accounts made by the same user you already have blocked, allows those on the app to decide what’s best for their mental health in a way that can be adjusted as frequently as needed.

So how will it all go down? Users will see a notice at the top of their feeds alerting them to the changes. These settings will be retroactive, which means you’ll be prompted when publishing new content, but can also go back to old posts and utilize this tool. By clicking the three dots on the top right side of your post, you’ll have access to the choices on each individual post. If you’re looking to moderate your comments or hide the like count on other’s posts, users can head to “Posts” or “Comments” in “Privacy Settings” and select the combination that most makes sense for you. 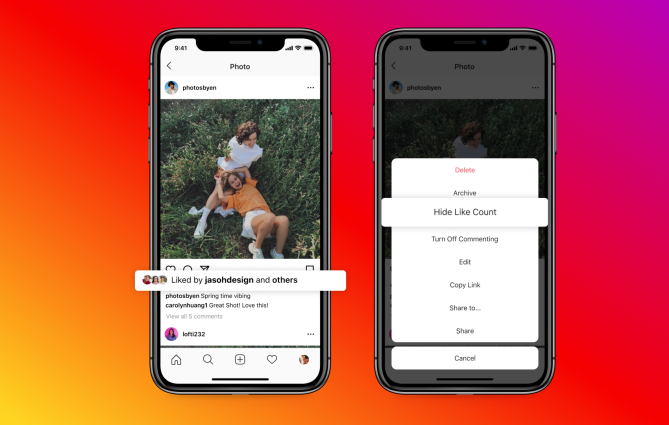 While there’s excitement surrounding the option to customize your in-app experience on Instagram, some have raised concerns about the way these settings may impact the algorithm. In recent years, the platform has received widespread criticism for the ways in which the algorithm functions—and who it favors. More specifically, its biases against people of color and members of marginalized communities. For that reason, Instagram teamed up with The Jed Foundation, which protects emotional health and works to prevent suicide, to host a pre-launch roundtable with the founders.

Bunny Michael and Schuyler Bailar discussed how they plan to use the newest features both as content producers and consumers. Bailar gave insightful feedback about how he hopes that these updates will allow for more productive conversations. As an active member of the LGBTQIA+ community, Bailar explained how often much of the work that he does can spiral out of control through negative and hateful comments. Not only are comments a concern for the foundation, but they also expressed hope that eliminating like counts will change the way many are influenced by other’s opinions. Without determining their thoughts about a post by the number listed under it, they believe that users will be more likely to interact with content that resonates with them.

For those who have built their career around social media, many benefit from others being able to view their like counts and engage with their posts, essentially encouraging others to join in on the conversation. While brand deals and partnerships have evolved, becoming contingent on overall engagement rates, there is something to be said about the “influence” of seeing how others feel about the content on your feed. STYLECASTER’s Fashion & Lifestyle Editor, Bella Gerard, gave her thoughts on the big changes as someone who has used their social media presence to partner with brands, “I have a feeling everyone’s usual number of likes will decrease now that they won’t be held accountable. I can’t help but think influencers who are upset at the news are likely unhappy with their overall engagement as well. That said, this does open the door for companies working with influencers to require more information on their stats before agreeing to partnerships.”

Although Instagram has become one of the biggest platforms for activism and marketing since its start in 2010, the truth is that the majority of the users are there for recreational purposes – to share and engage with personal content from those they know in real life. When it comes to the average user, the thoughts on these new features are mixed, but with a consensus that likes don’t really matter all that much. STYLECASTER’s Shopping & E-Commerce Editor, Mia Maguire, said it best, telling us she’ll “Probably leave the like count on. I’m not an influencer, so I highly doubt anyone is looking at that. The only thing I care about is that my grid stays pink.” And we couldn’t agree more. Hopefully, the newest features to Instagram allow everyone on the platform to best express and embrace their own creativity, in whichever way makes them feel the most seen.