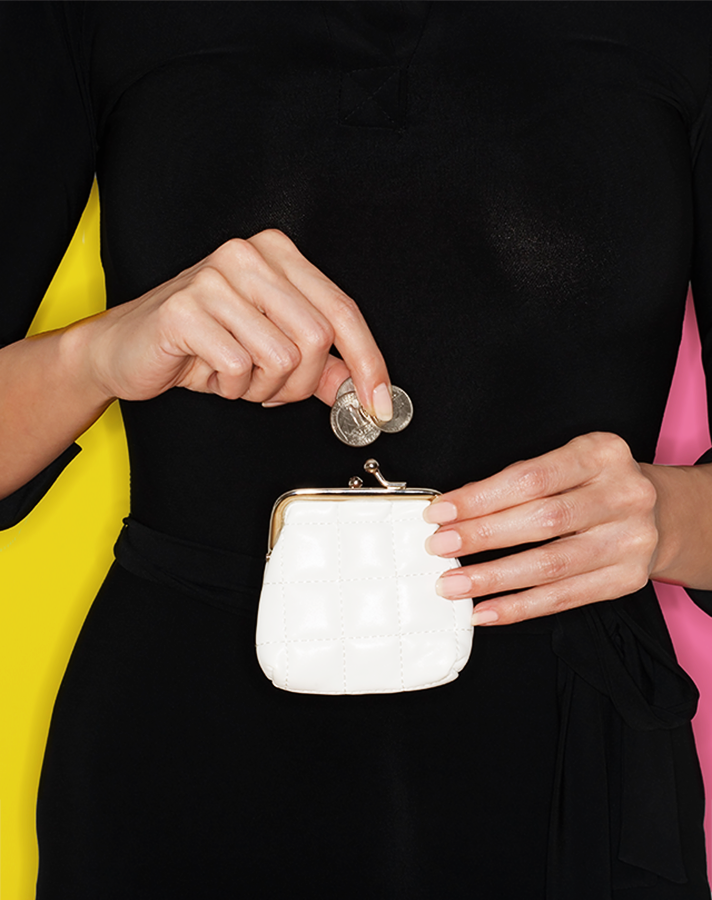 When Anna Newell Jones was in her mid 20s, she found herself way over her head in debt—to the tune of nearly $24,000, thanks to poor spending decisions and a penchant for online shopping. In 2009, she made a commitment to change her habits and began blogging as she worked her way out of debt. Within 15 months, after going on a “spending fast” and investigating her bank balances, she was completely out of the red.

Now, she’s published a book to help other young women change their spending habits. So, as someone who has a not-so-great relationship with finances myself (I have no real debt, but equally modest savings), I asked Anna to walk me through some of the techniques she used to turn her financial situation around.

The first step is to make a “reverse budget”—Anna told me that this process is “a real eye-opener” for anyone who ever gets to the end of their pay month and wonders where the hell all their cash went. “Have you ever wondered where all your money goes, and thought that it’s a true mystery because you don’t really buy anything that you don’t absolutely need?” she asked, reading my mind. By creating a reverse budget, she promised I would have a more realistic idea of where I’m really wasting money.

The first stage of the “reverse budget” process involves combing through your bank and credit card statements, which is my least favorite thing to do, to narrow down where your money is going and will reveal patterns and problem areas.

“To get a completely honest, objective view of how you spend money, you’ll need to pull the last three months of your bank and credit card statements,” Anna said.

She told me that many personal finance experts advise people to start tracking their spending when they decide to get out of debt, but explained that looking backwards is a faster way to work out what you’re spending. “Plus, it’s entirely possible that you might subconsciously—or actually, consciously—skew your spending to make your habits seem more favorable than they really are once you start tracking your money,” she added.

Use columns and write down each item under the appropriate category once you spot it on your statement. You should have a column for housing, food, utilities, entertainment, gifts, transportation, clothing, insurance, medical, and miscellaneous. “Start by reviewing every line on each statement, and as you go, list every single purchase in the appropriate column. If the category you need isn’t included in the list I provided, simply add it.

MORE: Where the Election Frontrunners Stand on Your Student Debt

Next, find find your average monthly reverse budget by dividing each category by three. “Using three months’ worth of statements provides a good sampling over enough time to reveal spending patterns. We all know that unexpected expenses pop up some months, and other months there are hardly any. Three months will give you a solid look at how you spend,” she said.

Clothing: $0 (For some reason I am extremely proud of this.)

As much as I wanted to include a $86.25 trip to the day spa as medical, I did not. In addition to those expenses, I also managed to save and invest a little money that I haven’t included above.

Next, Anna said to go through and look for spending patterns. My painfully obvious weakness is spending cash on expensive lunches instead of preparing before work—my food column took on a life of its own. Also, I’m pretty concerned by the amount spent on miscellaneous expenses that I have absolutely zero recollection of, and—although I do go several times each week—my gym fees are astronomical. The next stage is to come up with ways to reduce those areas of spending and commit to living debt free.

I discovered a few autopayments for services I don’t use anymore, and Anna suggests anyone struggling to get out of debt or save money (me!) should stop these. “I found that by having payments automatically transferred from my account, I was far less conscious about the money that was leaving my account,” she said of her own experience. You’re also less likely to miss an accidental overcharge if you’re making the payments manually.

If you do have debt, the next step is to call your creditors and ask for a lower interest rate, or to move due dates for payments to coincide with your income.

Another one of Anna’s recommendations that I’ve implemented: Turning off overdraft protection on your bank account. This feature means that your bank will allow a transaction to go through even if you don’t have enough money in your account—but they’ll usually slap you with a $30 fee. So, you could end up paying $35 for a coffee rather than just dealing with the embarrassment of a declined card, and switching to cash or a different card.

Now that you’re set up, create a list of your debts by highest interest rate to the lowest—this becomes your debt hit list, and you will now work on paying them off from the highest interest rate to the lowest. Anna explained that while it would feel deceptively good to pay off the small debts quickly, just because they’re the smallest, in the long run it’s better to avoid accruing more debt through interest.

While all of these tactics are a good way to get started, you’ll need to read Anna’s new book for the full plan. Just add $11.89 to your miscellaneous column, and snap up a copy here.