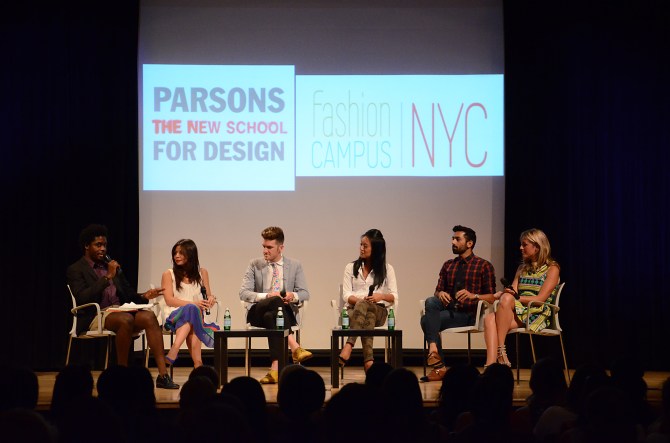 Last night, Parsons The New School for Design, together with the New York City Economic Development Corporation, hosted a panel discussion comprised of five fashion industry professionals. The event marked the conclusion of the three day Fashion Campus program designed to inform and enlighten students looking to break into the city’s apparel business.

Kicking off the evening was Lee Meiner, Senior Vice President of Human Resources at Theory/Helmut Lang. Meiner told participants the key to landing a job  at his company is having the ability to convey your passion for the position during your interview. In terms of resumes and cover letter, his philosophy is the less verbiage, the better—and triple check for typos, or it’s straight to the trash. Another must: Thoroughly research the company prior to your interview, and to be open minded to various positions, as different titles can have varying functions depending on the given company.

Moderating the discussion was the stylish Benjamin Le Hay, a fashion editor at the New York Observer. Read below for some key pointers on how to land a fashion job—and succeed at it, from the smart, successful and straight-shooting panelists.

Natasha Huang, President, NH Media
When Huang moved to New York from L.A. to pursue a career in fashion marketing and public relations following a stint as a physical therapist, she didn’t know anybody and had to relay on some serious networking to land a job.Her advice for networking like a pro is to never be fake, and to form connections with people by saying something honest and meaningful, rather than simply stating what you think the other person wants to hear. Huang’s also a staunch believer in having an original business card that stands out from the pact. Once you’ve got the job, she says you should be prepared for more tough days than easy ones, and for plenty of rejection that you should learn to not take personally.

Rishi Magia, Copywriter, Ralph Lauren
Magia worked in advertising before he landed his first fashion gig in the public relations department at Oscar de la Renta, where his boss was none other than Erika Bearman, aka Oscar PR Girl. He scored the position by responding to a tweet, and advises job seekers to clearly state their personal connection to a brand during an interview because everyone will say they love fashion, but what will set you apart is having your own unique angle. Despite realizing public relations wasn’t for him and switching over to copywriting at Ralph Lauren, Magia credits Bearman for pushing him further than he thought he could go, which for him is a telltale sign of a good boss. His opinion is if you have that fire inside of you, people will notice and you will eventually have the career you want.

James Nord, Founder, Fohr Card
When breaking into the industry, chances are you’ll be starting out as an entry level employee, but for Nord that doesn’t mean accepting the first job offer that comes your way. His rationale is even if you don’t love your particular job, you should at least like the company you work for. Nord suggests compiling a list of ten or so companies you want to be employed by, and trying to figure out ways you can land an interview with them. As far as networking is concerned, the entrepreneur says there’s nothing wrong with asking someone to reach out to a contact of theirs on your behalf, and that more often than not people are willing to help, especially when your request is specific.

Francesca DeMauro, Director of Business Development, Bumble and Bumble
For DeMauro, networking doesn’t stop once you get the job, it’s something you should be doing around the clock because the more people you connect with, the more opportunities you open yourself up to. Her mentality is that there’s a way to connect with virtually anyone, it’s all about finding that initial link. Once you establish a relationship, DeMauro’s advise is to not be afraid to ask people for help.

Nikki Breedlove, Senior Merchandiser, Sam Edelman
Breedlove didn’t study fashion in college and maintains the best learning is done outside of the classroom. She told participants to do as many internships as possible and to be willing to work from the bottom up. When Breedlove started at Sam Edelman, the company had just launched, but with time she moved up the corporate ladder and now she works directly under Edelman himself. She attributes her growth to her proven commitment to the brand, her experience working in various departments within the company, and to having a strong understanding of the consumer.

MORE CAREER ADVICE ON STYLECASTER:
3 Easy Ways To Be Happier At Work
5 Fabulous Pieces of Career Advice From Iman