I still remember it like it was yesterday. I was riding shotgun in my friend’s car in a town in North Carolina when we approached a stop sign. A group of teenagers crossed the street while I absentmindedly looked out the window. The sun was shining and I’m sure some pop song was blasting through the speakers like always. That’s when I heard my friend scream, “That’s why people shoot you!” I looked up and noticed a Black teenage boy in the group. I sat stunned thinking, “Did she really just say that?” I must have misheard her, although I knew in my gut that I hadn’t. She said one of them spit toward her car, which wasn’t a reason to yell what she yelled. There was no reason to yell that. I turned toward her and firmly said, “You can’t say things like that,” but she didn’t see anything wrong with what she said. I looked back at my other friend riding in the backseat who remained silent during our interaction. Within seconds, the car was moving and the moment was gone. To this day, over three years later, I wish I could go back. I regret not sticking up for his Blackness and ultimately, my own.

I was scrolling through social media the other day when a post stopped me in my tracks. The gist of it was that people are realizing their friends never liked Black people—they just liked their Black friends. Reading those words brought back all the microaggressions and derogatory comments I’ve heard spoken both to me and in my presence. Attending school as a minority in predominantly white areas, like the suburbs of Buffalo, New York, has a strange effect on white people. It’s like they forget you’re Black. They say things that make you wince, but you don’t say anything because you’ve been conditioned to forget your Blackness as well. Because maybe if you don’t call attention to the pigment of your skin, the shape of your body or the texture of your hair, you’ll be accepted. You’ll be liked. You’ll be one of them.

I think that’s why my friend’s comment stung so much. It was the needle that burst my bubble. I quickly realized that they will never see me as one of them. The fairness of her skin will always give her an advantage in society whether she wants to admit it or not. You see, my college-level education and my career success do not eradicate white privilege. The fact that we had a Black president does not eradicate white privilege. White privilege is merely the fact that your life is not made harder by the color of your skin. I’ve had friends fight me on its existence; they put the burden of proof on me. Years of slavery, legal discrimination and systemic racism aren’t enough proof when their Black friend seems just as privileged as them.

I regret not sticking up for his Blackness and ultimately, my own.

I’ll always wonder if the reason the boy I liked in high school didn’t like me back had to do with my race, or if the reason I was passed up for a job had to do with my skin tone. But, what I do know is the pain I feel when the people who say they love me make racist comments. If that’s how they talk in my presence, I can only imagine what they say behind closed doors. What’s a girl to do when she attends a high school with only three other Black students in her graduating class? Unless she wants to be an outsider, she tries to fit in. Thankfully, I have plenty of white friends who acknowledge the injustice in the world. They are conscious of their privilege and ask me to call them out if they ever say something offensive. I love them so much more for that. 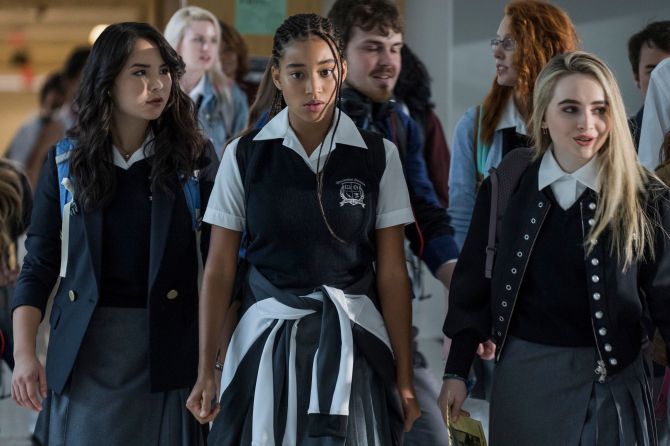 I recently watched The Hate U Give and felt like I could relate to the main character, Starr. The movie tackles police brutality and the feeling of trying to navigate belonging to two worlds: the world in which you come from and the world in which you live. I find myself being criticized by both worlds. Family members say I’m not Black enough while some friends try to steal my Blackness from me by claiming they’re “Blacker than I am.” That might be the cruelest statement to make. Not only are you benefitting from your white privilege, but you want to try on my color by using slang, listening to rap and sleeping with Black men as if Blackness is some kind of jacket you can put on and take off as you please.

So I ask this: don’t come to me saying “Blue Lives Matter” or spouting any of the other misguided terms used to diminish the Black Lives Matter movement. You can take off your uniform, but I can’t take off my skin color. Don’t ask me to convince you that white privilege exists. Don’t act like being my friend means you’re not racist. Don’t tell me I’m “pretty for a Black girl.” Don’t ask me if my straightened hair is a weave. Don’t mock me by saying how much I must love fried chicken. Don’t tell me you’re so tan that you’re almost my color. And don’t you dare try to excuse police officers’ murderous actions by blaming it on my skin color. The days of me making myself smaller in order to make my white peers more comfortable are over. I will no longer try to hide who I am in order to be who I think you want me to be. That girl had a good run, but she’s gone now from my life.

Instead, I’m the woman who has no problem unfriending your Trump-supporting family (both on Facebook and in life). I’m the woman who will shut down your prejudiced remarks without hesitation. I’m the woman who after over a decade of friendship is questioning if you ever saw me for my whole self, Blackness included. It’s taken me a long time to get here, but I’ve finally arrived. So, to my friends who let racist comments roll off the tongue without a second thought, hear me when I tell you: Your racism is proof that we were never really friends. That too was an illusion.